Derek DeBoer and Sean Gibbons doubled down on their strong outing two weeks ago at VIRginia International Raceway, with back to back P3 Podium finishes in the Pirelli GT4 America SprintX East races this past weekend at Canadian Tire Motorsport Park.

This was Sean’s first time at this track so running two strong races and coming away from the weekend maintaining his SprintX East AM lead is a big accomplishment!

The standings are not always easy to decipher, especially if you are not a motorsports racing guru, so that might lead you to wonder why Derek DeBoer is then currently in 6th place in the East, while co-driver, Sean Gibbons is in first, and yet Derek and co-driver Dr. Jim Rappaport are 3rd in the West. The answer is because Derek's results at COTA only counted as part of the West championship so he essentially missed 1 East Coast race.

Driver - Derek DeBoer - “CTMP is an amazing track and has definitely become one of my favorites!  Its one of those places where you feel very successful coming home with a clean car in the trailer, so 2 more podiums are icing on the cake and are keeping Sean and me pointed in the right direction for the East Coast Championship!  Each time I get into this Passtime / LaSalle Solutions #17 Porsche, I fall in love just a little bit more! - Brooke (creator of Fastlife.TV) was also on hand in Canada and will have some updated episodes coming soon. Please head to www.fastlife.tv and subscribe so you’ll know when and where you can see them...”

Driver - Sean Gibbons - “This was my first ever trip to CTMP and everyone told me how beautiful it is but also how hard it is to learn and go quickly there. So to come away with 2 podium finishes and leading the SprintX East Am championship is so exciting. Derek and Spencer were so great to work with helping me get the track figured out and the team at TRG gave us a confidence-inspiring Passtime / SiriusXM Canada / Lasalle Solution Porsche Cayman GT4 Clubsport MR as always. Now we head to Watkins Glen, to a track that I know well, to see if we can move a couple of steps up the podium” 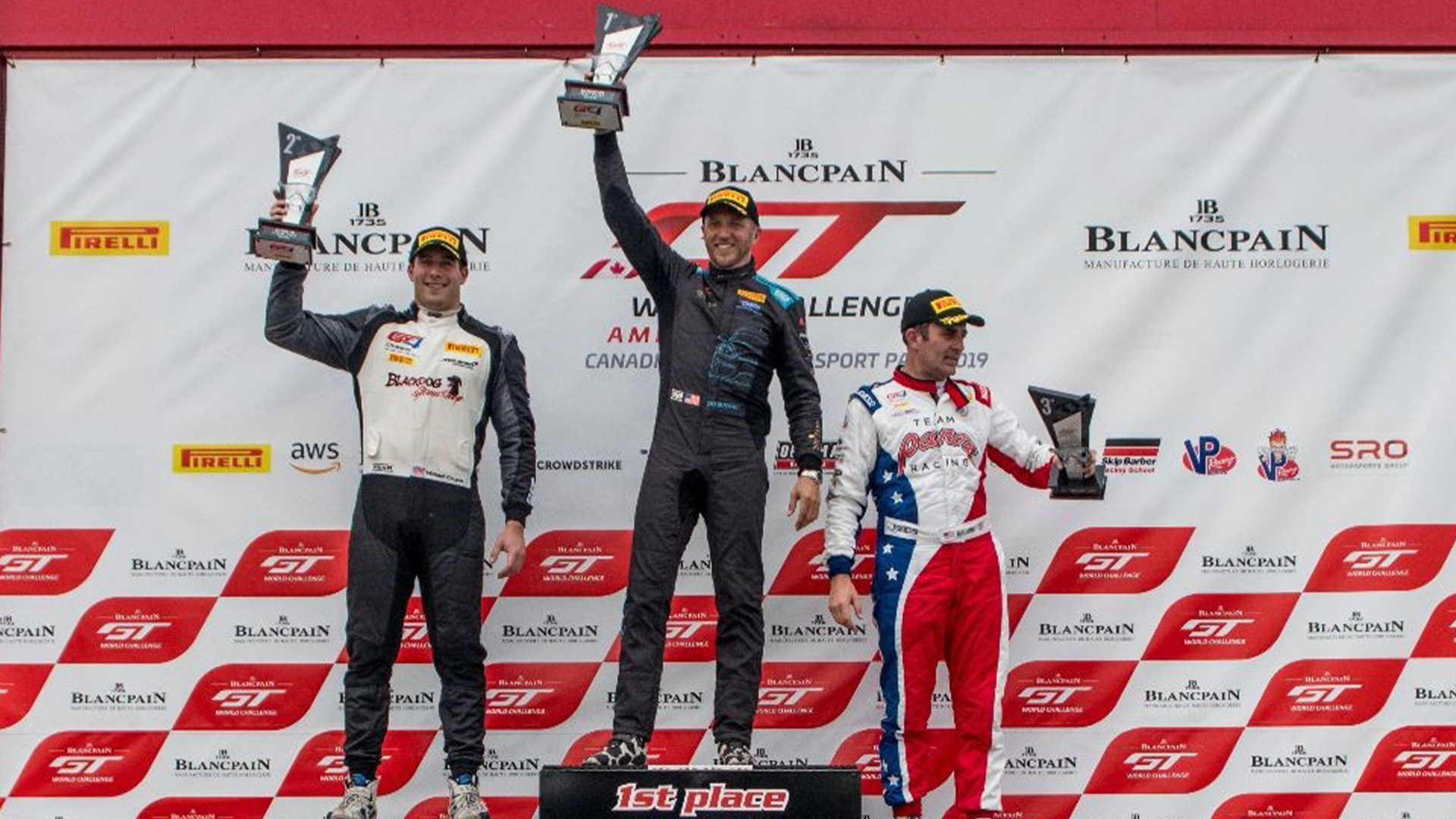 This was also a big weekend for The Racers Group (TRG) and Spencer Pumpelly. Many would even say a season-defining one. Spencer was leading the Pirelli GT4 Sprint PRO Championship going into the races at VIR the previous weekend, but 2 catastrophic, mid-race tire failures, in both race 1 and race 2, put his entire season in jeopardy as the #66 TRG / LaSalle Solutions Porsche Cayman GT4 received zero points for either race. Going into the races at Canadian Tire Motorsport Park, at a track known for speed and its incident-filled races over the high-speed, 10-turn, 2.458-mile course, Spencer and the entire TRG crew knew it was going to be a make it or break it weekend and they did not disappoint. In race 1, Pumpelly and Elghanayan battled for the lead until lap 26 when Elghanayan was able to maintain the #1 position to take first place. Coming in with a strong P2 finish though put Spencer in a great place to start race 2. In race 2, it was a constant battle for the lead until lap 31, when Spencer was able to widen the gap between the #66 car and the second and third positions, taking the checkered flag with a 1.4 second lead and putting him at 98 points for the season against the second and third place point leaders at 93 and 90 points.  Both races were hard fought with well-deserved outcomes!

Driver - Spencer Pumpelly - “CMTP was a good rebound from a tough weekend at VIR where we lost the points lead due to things beyond our control. Getting back to the podium and reclaiming the points lead was big. Nearing the halfway point in the season, our speed and consistency in The Racer’s Group Porsche have kept us in the hunt but the hardest part is yet to come. We are approaching the dog days of summer which is where the season will heat up.”