SONOMA, CA -  Race 1 winner Michael Cooper (Pro) led the field to the start in his #10 Blackdog Speed Shop McLaren 570S and as soon the race went green a full course yellow was called for an incident at turn 3.  The #7 Park Place Porsche 718 Cayman CS MR of Alan Brynjolfsson (Am) made a daring dive for the apex, but was hit and spun, forcing the fluorescent yellow car to spew fluid on the track and retire.

Before the caution was called, Jarett Andretti (Pro) moved past the Am-leading Ford Mustang of Drew Staveley for the fourth overall position.

The race went back to green with 42 minutes on the clock with the order of Cooper (Pro), James (Pro), Pumpelly (Pro), Andretti (Pro) and Staveley (Am) holding the top five positions.  The #50 Panoz of James went straight to attack mode, passing the #10 for the lead two laps later on the inside of turn 2.  From there James would easily gap his rivals and cruise to his second victory of the season.  “The last few laps I was thinking of the late, great Don Panoz and the win was very gratifying for many reasons,” said James, “The championship is really close,  It’s nip and tuck, back and forth and we’re going to fight for it until the end!”

While the two leaders were battling, the #66 TRG Porsche 718 CS MR of Spencer Pumpelly was able to reel in both rivals and go on the hunt for second position.  Similarly to race 1 however, Pumpelly would run out of tires and have to settle for another third.

Starting from the ninth position, CRP Racing’s Matt Brabham (Pro) would quickly move into eighth place at the restart, then take his #20 Porsche Cayman CS MR GT4 past the #71 Marco Polo Motorsports KTM Xbow of Nicolai Elghanayan (Pro) for seventh with 30 minutes to go.  The young Brabham wasn’t done yet as over the next five laps the Australian would catch the #72 Robinson Racing Chevrolet Camaro of Shane Lewis (Pro), dive to the inside at the turn 11 hairpin and snatch sixth position with 18 minutes left on the clock.

As Staveley and Andretti battled for the fourth overall position, Brabham would catch both with the three competitors separated by a mere 3/10ths of a second.  Brabham would overtake Staveley for fifth going into turn 4 with 12 minutes to go and start his pursuit of Andretti for fourth position.  Four minutes later Brabham and the #20 CRP machine would scream past the #18 Andretti Autosport McLaren at the turn 7 hairpin and claim fourth position, where he would ultimately finish.  Andretti would take fifth. 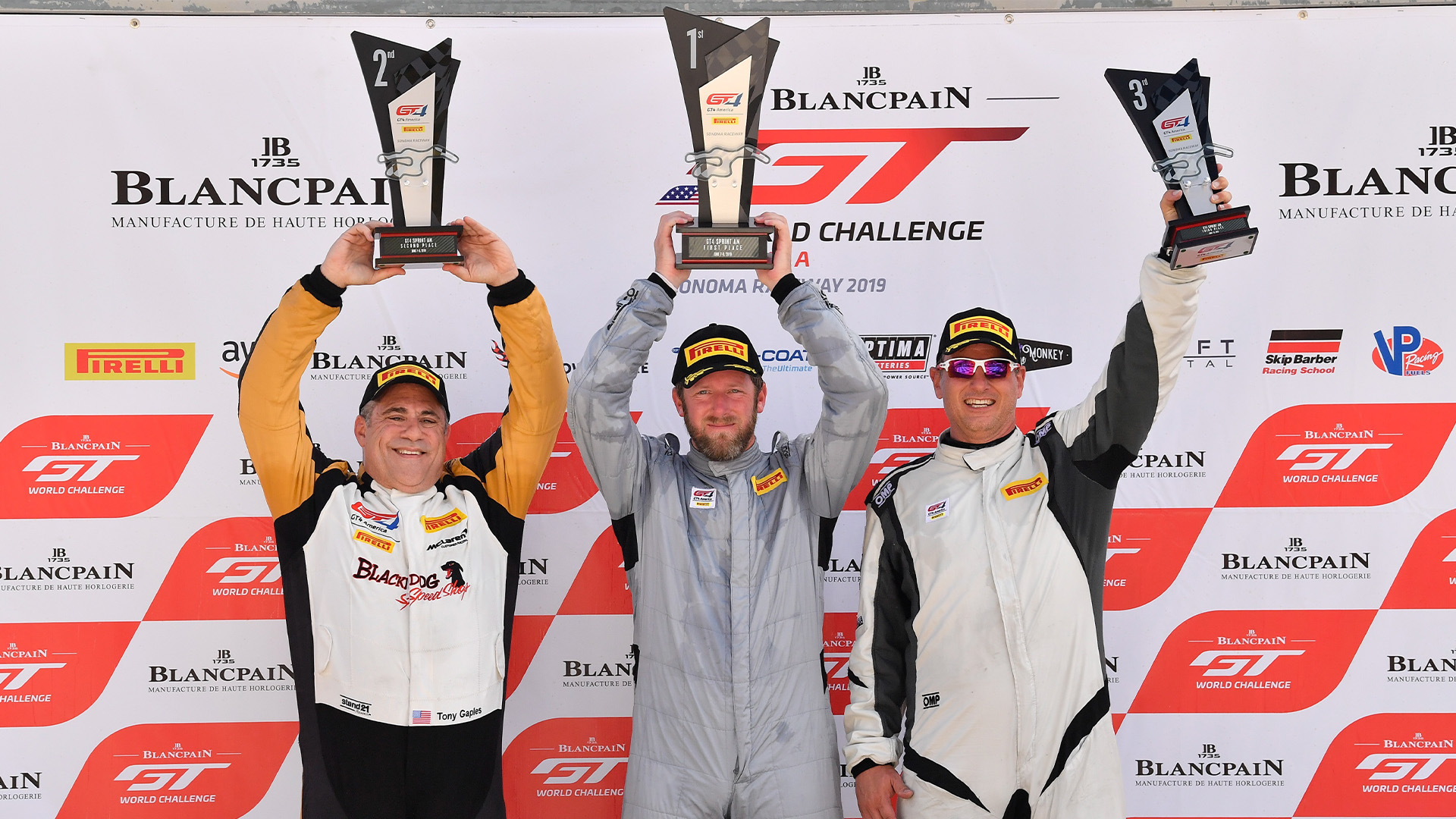 In the Am category, Drew Staveley and his #12 Ian Lacy Racing Ford Mustang would control the field once again with the #11 Blackdog Speed Shop McLaren 570S GT4 of Tony Gaples coming home second.  “It was a great weekend,” said Staveley.  “We had a great car, not enough for the overall top four, but we gave what we could and I’m very happy with the class win.”

The Pirelli GT4 America Sprint series will be back in action the weekend of August 30th at Watkins Glen International for rounds 10 and 11 of the 2019 season.