Sonoma, CA - After a two-month hiatus, the ST Racing Team headed to the West Coast for Rounds 5 & 6 of the Pirelli GT4 America SprintX West Championship. And, what better setting than Wine Country’s Sonoma Raceway to add three more podiums to their score sheet.


Surrounded by beautiful rolling hills, and vineyards, the 12-turn 2.52-mile road course offers plenty of elevation, high-speed corners, but very few reference points and low grip. It is known as a difficult track to learn and very sensitive to hot temperatures.

Samantha Tan joined the other three ST Racing drivers on Friday morning, missing Thursday’s test day, as she had to attend class to write a final exam.

For the ST Racing drivers, the first on-track sessions were all about learning the track and finding the reference points. And with an older track surface, and increasing temperatures, everyone was struggling to find grip and save on tires.

Saturday morning’s qualifying was shortened a bit due to a red flag early in the session. Samantha Tan and Jon Miller both agreed that it was critical to get the best lap out of the tires right away on this track.

“It’s too bad there was red flag just after we had done our warm-up lap, because the tires would have been really great then,” said Tan.

Jon Miller added “We lost the prime lap out of the tires because of the red flag. The track surface and increasing heat is going to hurt the grip for everybody.” 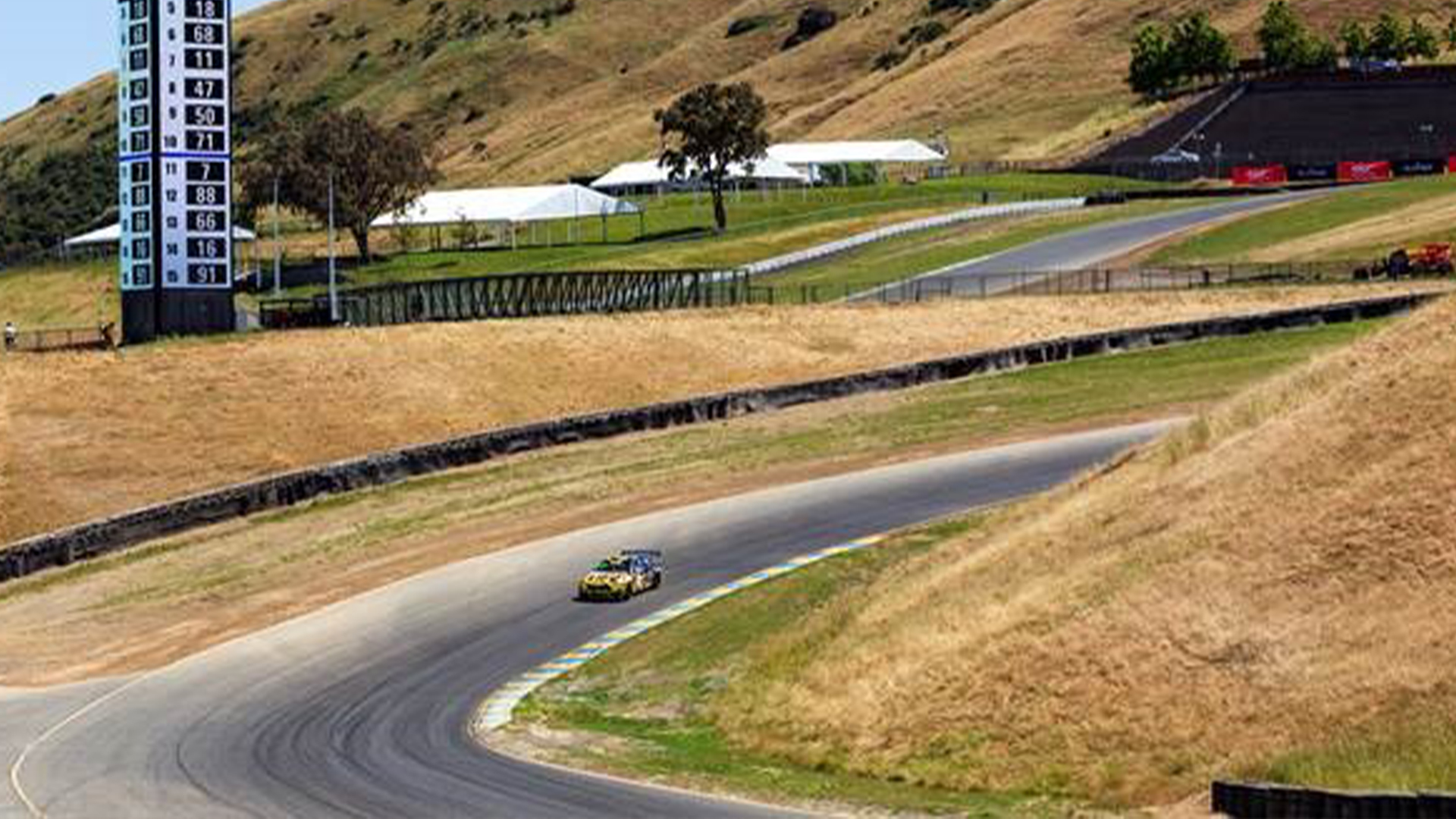 During Saturday’s late afternoon race, the dynamic ST Racing duo of Jon Miller / Harry Gottsacker drove a solid race in their #28 BMW M4 GT4. The team had made some changes to the car that seemed to pay off, as they kept a good strong pace to stay with the leaders and secured a second-place podium finish.

“Jon did an amazing job starting the race” said Gottsacker. “He took a couple of positions right off the bat, and was able to manage a good gap. Then, the caution flag came out, and it was time for the pit stop. I got in the car, and because Jon had done a great job of taking care of the tires, I did my best to hold on, even though we were struggling with grip. Near the end, on a re-start, I was able to fight back for a second-place spot which is really big in our points standings right now.”

“It was a wild race, as expected” added Miller. “The grip wasn’t great. We had a good strategy. I changed my driving style a bit for the race over the weekend. I’ve been learning a ton about this track, it’s very unique, and I’m still learning about this car after two seasons of driving it. When I handed the car over to Harry, he did an absolutely fantastic job and brought it home in second place. I’m super proud of Harry, and the whole group at ST Racing. It was just an awesome day!”

However, for Samantha Tan and Jason Wolfe, co-drivers of the #38 ST Racing car, the first race of the weekend did not produce the result they wanted, despite putting on a good performance. Early in the race, Tan made some good passes and gained two positions within the first five laps. Wolfe’s stint was going really well when a competitor driving the #5 USRD Ginetta car ran into him causing some serious damage to the right rear wheel with just two laps to go before the checker flag. The #38 machine had to come into the pits, thus ending their day on a disappointing note.

Trying to keep positive, Samantha talked about the race: “The race was fun. We started on fresh new tires. It was really hot out when we started, and the tires fell out really fast. I managed to keep really consistent times and kept up with the pack. I had a really good pass in the last corner as well as the pass coming into Turn 1. Then, I handed the car off to Jason, and unfortunately, the Ginetta car hit us today.”

Frustration was all over Jason Wolfe’s face, at the end of the race when he commented: “Sam had a really good start, she even made a couple of nice passes and kept up with the lead cars, which made my job easier when I got in. When I went out, there had just been a yellow flag, and the field was packed up. We struggled with the car overheating in this hot weather, so we couldn’t really race that hard. We had to focus on keeping the temps down, and then this guy came over and took us out. That was it.”

By Sunday afternoon, the temperatures were in the mid-90’s again, and the second race was somewhat of a repeat performance for the Miller / Gottsacker duo as they climbed up on the second step of the podium again, but this time, with ST Racing teammates, Tan and Wolfe, standing on the third step.

“Another second-place finish today! Great points!” exclaimed Miller. “This race was kind of uneventful for me thanks to Harry’s (Gottsacker) great opening stint. He took care of the tires as much as he could, despite the very hot day. Tire degradation was another issue to deal with today. We got some temperature alarms for the engine, and the car stumbled towards the end of the race. I was charging to catch the guys in front of me, but at a certain point, I decided I’d better bring the car home, we were in a good points position. So I went into conservation mode. I’m happy to come away from Sonoma with two podiums.”

Gottsacker was all smiles when he commented: “I’m happy to come out of Sonoma with two second-place finishes.  We really worked well as a team this weekend to put a good setup on the car and have a good strategy.  It was really cool to share the podium with Samantha and Jason today and reward the team. In these hot temperatures, it’s important to have a good plan being executed by an experienced team like ST Racing.  This was another strong weekend in the GT4 America West championship for us. Our next stop is Portland, and I’m excited to go back there next month, I won there last year” added the young Texan.

Sunday was a whole new day for Jason Wolfe. He started P1 in class for Round 6 with a solid drive and despite the heat, he maintained his position right up until he handed the car over to his co-driver Samantha Tan at half-time.  Tan went out and did what she does best. The 21-year old Canadian drove well, kept her cool, fought off the #43 Audi, and brought home her #38 BMW M4 GT4 to secure a third-place podium finish.

“We started up front today” said Wolfe, “We were able to keep it consistent and didn’t have a whole lot of racing to do which was good because we had issues with the high water temperature, considering it’s about 100 degrees here. The tires fell off at the end of my stint, so I can only imagine what Samantha had to do to keep up. When she got in the car, she was able to run consistently, and the last few laps, she showed really good race craft at holding off the Audi. And, we were able to bring it home in third place, which was good.”

Samantha was all smiles at the end of the race. “It was a really really fun race” she said. “It kept getting hotter as the race went on. Jason had such a great run even with tire degradation. When I got into the car, the tires were gone. I definitely struggled with a lot of sliding, trying to get back to power, but I just couldn’t do it. I was drifting at almost every corner. I was battling with Sarah Cattaneo (#43 Audi), tried my best to keep her behind me, and tried not to look in the mirrors. We ended up in third place. I am really happy. Jason had a great run. We got redemption from yesterday, and overall, it was a good weekend. I learned a lot. It was my first time here, but I’m bringing this experience to my next race weekend, and it’s going to be amazing.”

“And a great big thank you to the guys and gal on the Team for working so hard in this hot weather.”

Be sure to join us for the next GT4 America event on July 12-14 at Portland International Raceway.