Watkins Glen, NY - Gar Robinson and his #74 Robinson Racing Camaro led the field to the green flag on a cool Sunday morning, but it was Jarrett Andretti and the #18 Andretti Autosport McLaren 570S GT4 that would slip through to grab the lead at the bus stop on lap 1.  Andretti would never look back and go on to claim his first career overall Pirelli GT4 America Sprint victory as a pro.  “We were good on new tires, so I knew I had to get Gar early in the race.  It was a really good run, but I spent the last three laps defending for my life!  It feels great to win here at The Glen.  This team and everything its about is great.  These guys did not go to the hotel last night, they stayed at the track all night, and I appreciate everything they’ve done.  It’s awesome, it means a lot,” said Jarrett Andretti.

With 39 minutes remaining in the race, Shane Lewis in the #72 Robinson Racing Camar would attempt a pass on Michael Cooper and the #10 Blackdog Speed Shop McLaren at the bus stop, but would make contact, forcing Lewis to fall down to nineteenth position, with Cooper’s car also suffering damage and slowly drop through the field.  At the same time, Spencer Pumpelly and the #66 TRG Porsche 718 Cayman CS MR would inherit third position with championship leader Ian James and his #50 Panoz Avezzano moving into fourth. 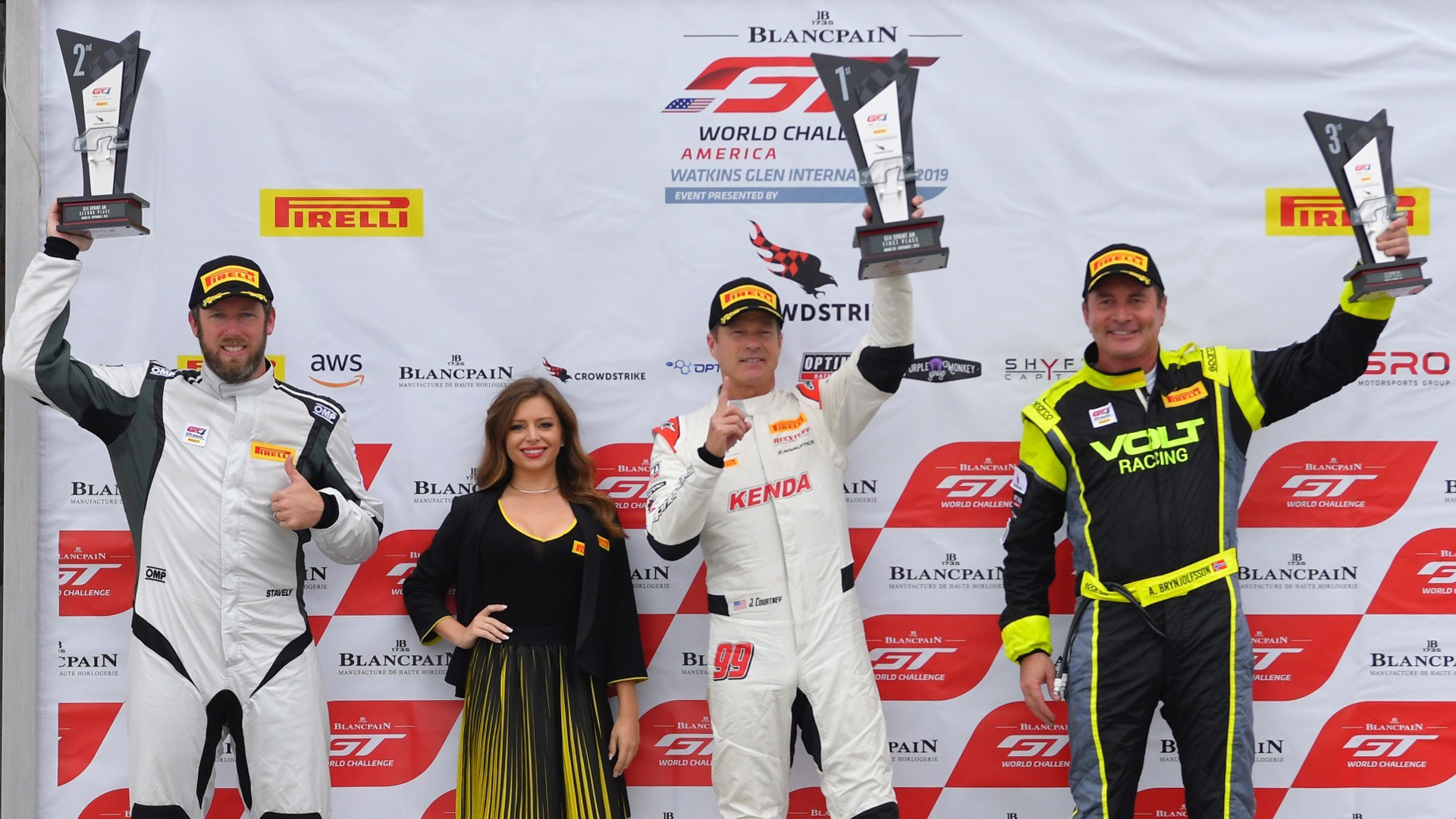 For the next 15 minutes, the top three overall leaders would run nose to tail - Andretti, Robinson, Pumpelly with fourth-placed Ian James slowly reeling the trio in.  With 20 minutes remaining, a safety car would be called for a heavy incident involving Jeff Burton’s #91 Rearden Racing Audi R8 LMS GT4, grouping the field back together for a long caution period.

The race would get back under green with just over 7 minutes remaining with Jarrett Andretti leading, Gar Robinson second, Spencer Pumpelly third, Ian James fourth, and Jeff Courtney in the #99 JCR Maserati,  fifth overall, leading the Am category.  Behind Courtney, Alan Brynjolfsson would take his #7 Park Place Porsche 718 Cayman CS MR to third in the Am class and would close on the second place #12 Ian Lacy Racing Ford Mustang GT4 of Drew Staveley.

On the last lap, Ian James would make a run at Spencer Pumpelly for the final podium position, but  bump him slightly at turn 9 and allow both Jeff Courtney and Drew Staveley through to finish 1-2 in the Am class, third and fourth overall.  James would let Pumpelly back through to take third in the Pro class, fifth overall, while James would end up seventh overall and fourth in class.

The Pirelli GT4 America Sprint series will move to Road America in Elkhart Lake, Wisconsin for rounds 12 and 13, September 20th-22nd.