Sunday’s victory, which followed a third-place finish for the #34 in Saturday’s first 60-minute race at The Glen, was another strong performance for the California-based Murillo Racing team. Szymczak started Sunday’s race from third and ran no lower than fourth and in the lead pack throughout his opening stint.

A strategy call by the Murillo team to bring Szymczak to the pits a couple of laps before the competition, and the well-executed stop that followed, proved to be the key moves of the race at the halfway mark.

Taking over from Szymczak, Fassnacht drove as fast as he could on cold tires in his first lap out of the pits. Fassnacht’s hustle, and the solid pit work and strategy, combined to put the No. 34 in first place after full-field pit stops were completed.

Fassnacht stayed on pace and maintained a several-second lead in the opening laps of his stint only to see the gap erased when a full-course caution slowed the field for a multi-car, on-track incident.

The field circulated under caution for several laps as race officials determined significant safety barrier repairs were needed and called the race with eight minutes remaining. The early end sealed the victory for Fassnacht, who crossed the finish line under waving checkered and yellow flags.

Sunday’s win follows SprintX victories by Szymczak and Kenny Murillo in the No. 34 in the race weekends preceding The Glen at Sonoma Raceway and Portland International Raceway earlier this summer.

Fassnacht and Szymczak scored the first SprintX win of the season for both the Mercedes-AMG GT4 and Murillo Racing in May at Canadian Tire Motorsport Park (CTMP).

The first two victories of the year for the Mercedes-AMG GT4 and Murillo Racing were Fassnacht’s sweep of the weekend’s single-driver Pirelli GT4 America Sprint races at VIRginia International Raceway (VIR) in April. 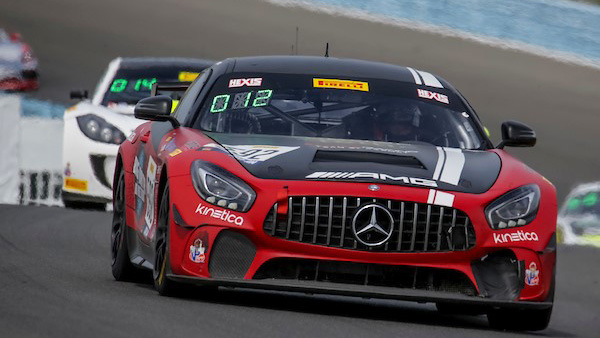 A second Mercedes-AMG Motorsport Customer Racing team made it to Pirelli GT4 America victory lane for the first time Sunday at The Glen.

In just the team’s second start in the series, Mark Ramsey and Alexandre Premat co-drove the #592 Ramsey Racing/EXR Team by Premat Mercedes-AMG GT4 to a fifth-place overall finish and second in the national Pro-Am class.

Matt Fassnacht, Driver – No. 34 Murillo Racing Mercedes-AMG GT4: “I want to thank Murillo Racing for a great car this weekend, and Christian for driving a good, clean race. The Mercedes-AMG GT4 is absolutely a proper race car. The beauty of it is that it is just so good on the long runs. Our strategy was to just drive the car the way we wanted to drive it and be there at the end. You still have to be flexible and adaptable, and when that gaggle of cars was fighting in front in the first stint, the Murillo Racing team decided to bring the car in early. I had to pound that out lap to jump the field and it paid off. Unfortunately, we couldn’t run to the end under the green, but the car was getting better and better. The end result was obviously good, but I would have liked more green-flag time in the car!”

Christian Szymczak, Driver – No. 34 Murillo Racing Mercedes-AMG GT4: “It feels really good. We have hit our stride together as a team, and with the Mercedes-AMG GT4, and everybody is working together really well. Everything has kind of fallen into place now, and it is really good to see that. Our plan was for me to go out there and hang in there with the front pack and not wear the tires out too much. We figured if we could get a good stop done, get Matt in the car smoothly and back on track, we could get him out in the lead. That’s exactly what happened. We pretty much executed as anticipated.”