As it has done the past couple of years, the GT4 racing season will open at Circuit of the Americas in Austin, Texas, March 7-8 with Sprint and SprintX in action. Billed as the Home of the World Championships, the 5.4-km (3.41-mile) 20-turn circuit is one of America’s premier race facilities.

From one of America’s modern road courses, the series heads to two renowned street circuits. Nestled close to some of Florida’s beautiful beaches, the Pirelli GT4 America series celebrates Spring Break as part of the Grand Prix of St. Petersburg. Utilizing downtown streets, and one runway of the Albert Whitted Airport the 14-turn, 2.9-km (1.8-mile) temporary street course will host two rounds of the Sprint series, March 14-15.

Roughly a month later, SprintX competitors will compete in ‘America’s #1 Street Race’ at the Acura Grand Prix of Long Beach, April 18-19. Now in its 46th year the Roar by the Shore will be held on the 11-turn, 3.167-km (1.968-mile) downtown circuit in the heart of the Port of Long Beach.

From two ‘street fights’, the SprintX series enters the Bullring – Lakeville, Connecticut’s Lime Rock Park. The seven-turn, 2.41-km (1.50-mile) track will host the series May 8-9. The focus then shifts north of the border to Canada for the annual rite of spring, the Victoria Day Speedfest weekend at Canadian Tire Motorsport Park, May 16-17. Celebrating the first Canadian holiday weekend each spring, the event will feature two Sprint rounds.

Both GT4 series then travel to the track that Paul Newman once described as heaven on Earth. The 17-turn, 6.76-km (4.20-mile) Virginia International Raceway hosts the series on June 6-7. It’s then off to California’s Wine Country, August 8-9 and Sonoma Raceway. SprintX and Sprint series will compete at the 4.06-km (2.52-mile), 12-turn road circuit that has been a staple on the series’ calendars since it hosted the first ever World Challenge race over 30 years ago.

It’s only fitting that the Motorsports Capital of the World will host the 2020 finale as the season’s championships will be decided at the iconic Indianapolis Motor Speedway’s 3.925-km (2.439-mile) 13-turn road course, October 2-3. 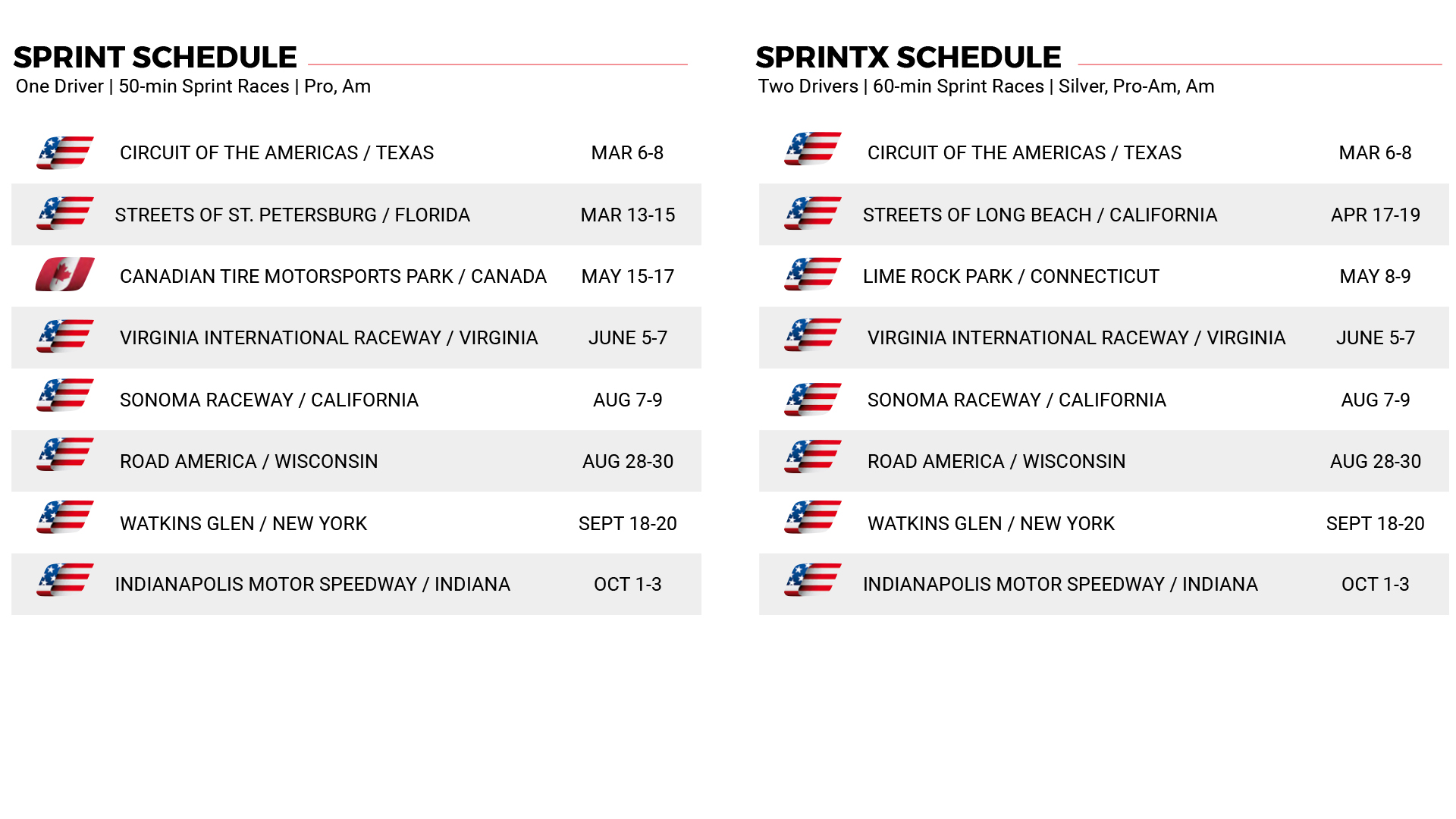