“We finally got the car dialed in and all the work it took to get this first win, we are extremely happy,” said Siljehaug.

“It feels so good.We weren’t that strong here last year, so to come this year and win, we’re really happy!” said Elghanayan.

Five minutes into the race, the #111 Motorsports USA McLaren 570S of Ty Clarke would go off track at turn 2, bringing out the first and only full course caution of the race.

The race went back to green with 44 minutes remaining with Siljehaug leading Foley, Wilson, and Kenton Koch in the #15 Bsport Aston Martin GT4. 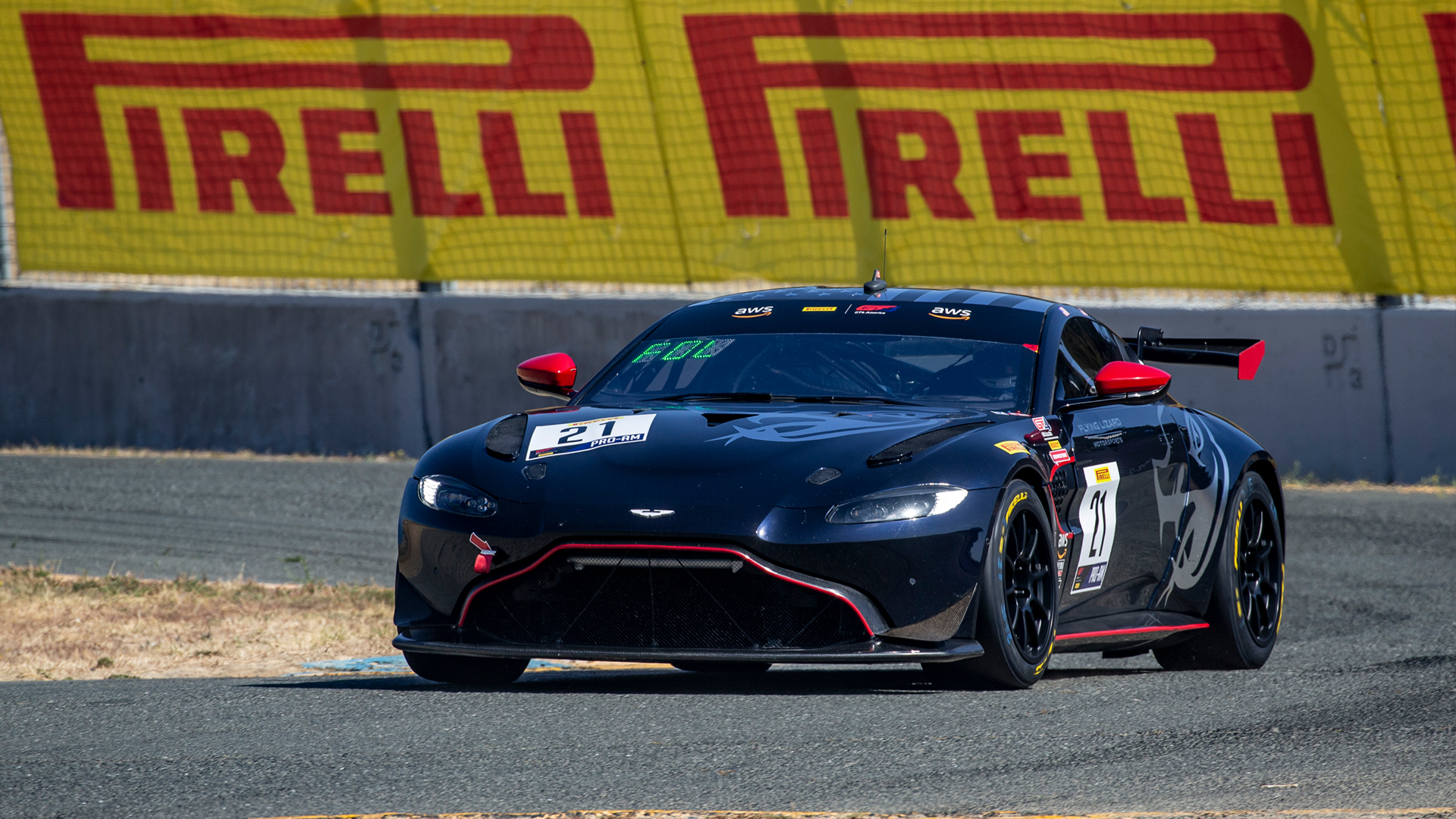 As the pit window opened for the required driver changes, Koch got past Wilson for third overall with Greg Liefooghe and the #19 Stephen Cameron BMW M4 GT4 fifth overall, third in Pro-Am and Andy Lee in the #8 GMG Racing Audi R8 LMS GT4 sixth overall, fourth in class.

With 10 minutes remaining Jon Miller in the #38 ST Raciing BMW M4 GT4 would sneak past his teammate Harry Gottsacker in the #28 ST Racing BMW M4 GT4 for ninth overall, third in the Silver class.  Miller would then go on the hunt of the Colin Mullan-driven #36 Andretti Autosport Window World-MI Windows and Doors, #CheckIt4Andretti-Military to Motorsports McLaren 570S GT4. but come up just short and finish on the final podium step.

As the clock ticked past the 5 minute mark, the #47 NOLASPORT entry would face a drive through penalty and fall to fifth, giving second place in the Pro-Am class to Bryan Putt in the #15 BSport Aston Martin Vantage with Sean Quinlan in the #19 Stephen Cameron Racing BMW M4 GT4 third. 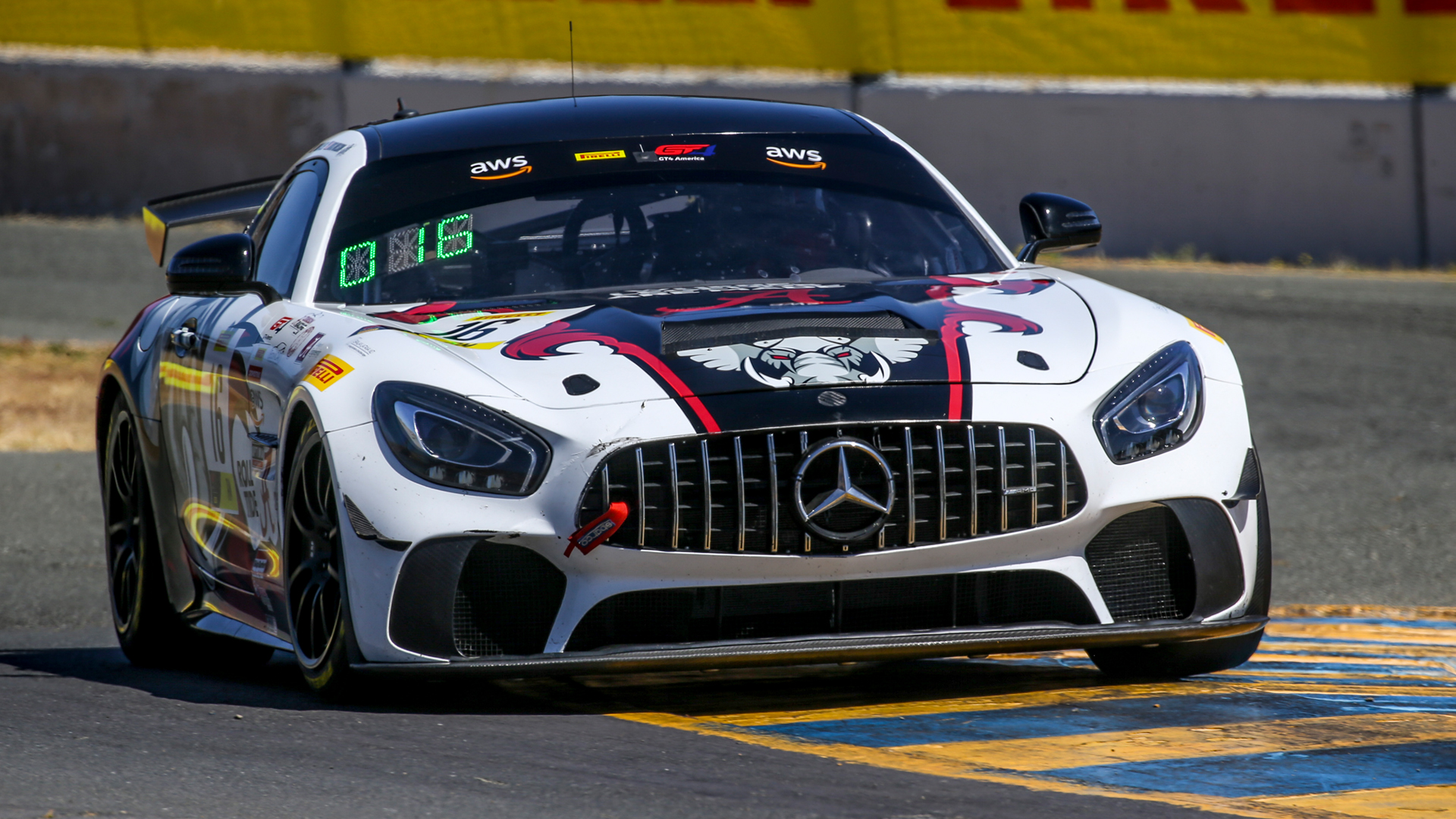 As the checkered flag flew, the Mullan/Andretti pairing would bring the #36 McLaren home second in the Silver class with Jon Miller and Samantha Tan taking third.

Dinan and Foley would take the Pro-Am victory with the #15 Bsport entry of Kenton Koch and Bryan Putt getting second position in class by only one-tenth of a second over Quinlan and Liefooghe.

“It’s been really impressive seeing Michael’s [Dinan] improvement over the last three seasons. He’s killing it in Sprint too, so to grab the win with him now, it’s great,” said Foley.

“To win with Robby [Foley] feels incredible and grab our first SprintX win of the season is special,” said Dinan.

Kris Wilson and John Allen would control the Am field in their #16 Rearden Racing Mercedes AMG GT4 with Sean Gibbons and Zac Anderson finishing second in class in the #7 NOLASPORT Porsche 718 Cayman GT4.  The #3 Motorsport USA McLaren 570S GT4 of Michael McAleenan and Dan Rogers would come home third in class.

“It was a pretty stressful race today, but I’m learning and getting better each race. Kris [Wilson] is a huge help and Rearden gives us a great car every race and we're happy to get the win!” said Allen.

“John [Allen] is clearly more comfortable in his racing and he’s really coming along. Obviously we have a great car too, but I’m really impressed with his progress!” said Wilson.

The final Pirelli GT4 America SprintX race of the weekend will run tomorrow morning, Sunday, August 9th at 9:30am PT. Stream it live at https://www.gt4-america.com/live