Elkhart Lake, WI – ST Racing hit the ground running as they arrived at Road America for Rounds 9-10-11 of the Pirelli GT4 America SprintX Championship hoping to build a bigger gap between them and the second-place Andretti Team.

And although the Team added three more podiums to their score sheet, a “hood” problem resulting in a DNF put their championship lead in jeopardy.

For Samantha Tan, Road America brought back the memory of a difficult weekend in 2017. The Canadian driver remembered only too well her last run at the fabled 4-mile Wisconsin road course three years ago when she hit the wall and suffered a leg injury.

However, with acquired experience and improved skills, the 23-year old racer was able to put that behind her and displayed some aggressive racing moves this weekend.

On Friday morning, torrential rains played havoc with qualifying but the weather cleared up in time for the afternoon race with ST Racing’s Jon Miller (#38 GPI BMW M4 GT4) and Harry Gottsacker (#28 GPI BMW M4 GT4) taking the green flag and going straight into attack mode. Miller, who started 4th overall was spectacular on the first lap as he charged successfully to the front when, all of a sudden, on Lap 2, he went off into the grass at Turn 6. He quickly rejoined the 21-car field, but by then, he’d lost three positions.

“I’m not sure what happened there” said Miller. “Turn 6 didn’t have much grip and it surprised me. Glad I didn’t spin. I was frustrated to throw away the positions, but I got them back again.”

Teammate Gottsacker also put on some incredible moves and by Lap 3, he’d gone from 8th to 4th, just before a full-course caution came out due to the #21 Aston Martin car going off track. On Lap 10, the young Texan came into the pits and handed over his #28 machine to his partner Nick Wittmer who was on fire and wasted no time moving up the field. As he successfully drifted off track a bit while battling for position, the television broadcaster commented: “Wittmer is showing his Canadian snow skills”.

One lap later, while running 2nd overall, Miller came into the pits for driver change. When Samantha hopped into the car, the radio didn’t get plugged in, and she couldn’t hear the crew chief’s instructions. However, early in her stint, she showed true grit and dueled for position on the front straight in a side-by-side battle with teammate Nick Wittmer. The race ended with Wittmer finishing 1st in class, 2nd overall, and Tan 5th in class.

“What a race!!!” said Wittmer. “Harry did an amazing job, gained positions and gave me a clean car. The team put a great setup on the car, that self-adjusted throughout the race to last the whole hour. I caught up to all the guys in my class, and got the win. We gained good points on Andretti.”

“Nick was a beast out there” said Gottsacker. 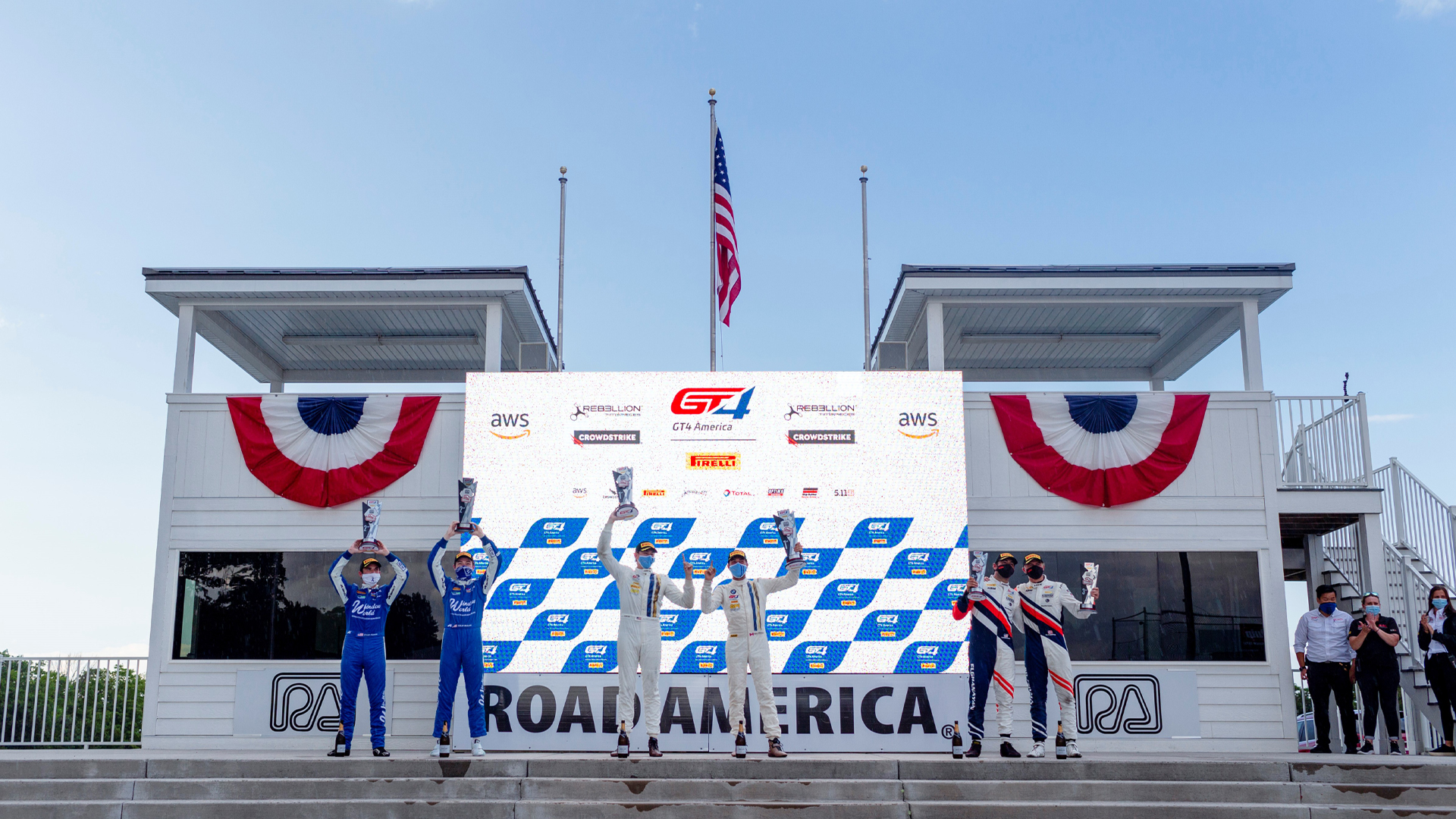 Saturday’s race was very different from the previous one. Nick Wittmer and Samantha Tan did the opening stint starting from 5th and 6th places respectively. They both moved up one position on the first lap. Tan did a tremendous job of holding off a pack of top drivers behind her and hung in there for a good while without letting them intimidate her.

By Lap 7, while Wittmer was running 4th overall, 1st in class, the hood of his #28 BMW M4 GT4 machine flipped up, while he was driving at top speed. Blinded, Wittmer slowed down, opened his door to see where he was going and stopped on the grass. His race was over!
With an ever-positive disposition, Wittmer’s co-driver Harry Gottsacker who never got to drive said: “Well, that’s racing. We’ll put the car back together for tomorrow and keep fighting for the championship.”

Meanwhile, Samantha Tan was trying to keep her cool while managing the traffic behind her.

“I had an amazing start and first few laps with a lot of great battles” said Tan. “I kept up with the pack up front until I started getting bumped from all sides. I got all flustered and struggled to get back into my rhythm. I guess that’s what happens when you’re running up front.”
Tan added “It’s really sad for Nick and Harry though.”

When her co-driver, Jon Miller took over at half-time, once again, he picked off the cars one by one, and brought the #38 machine home taking 3rd place in class, 7th overall.

“I was determined to bring home good points today” said Miller. And when I saw the podium was in reach, that was all the motivation I needed. Samantha drove really well, holding off a gaggle of top Sports Car drivers until one of them hit her knocking her out of the way. She rebounded nicely and gave me the car in good position. The end of the race is always a challenge for us with tire degradation. Track surface plays a big role in how we approach setup and tire management. It was satisfying to execute on all of that today. Thanks to ST Racing who never stop to give Samantha and I the best race car to fight with.” 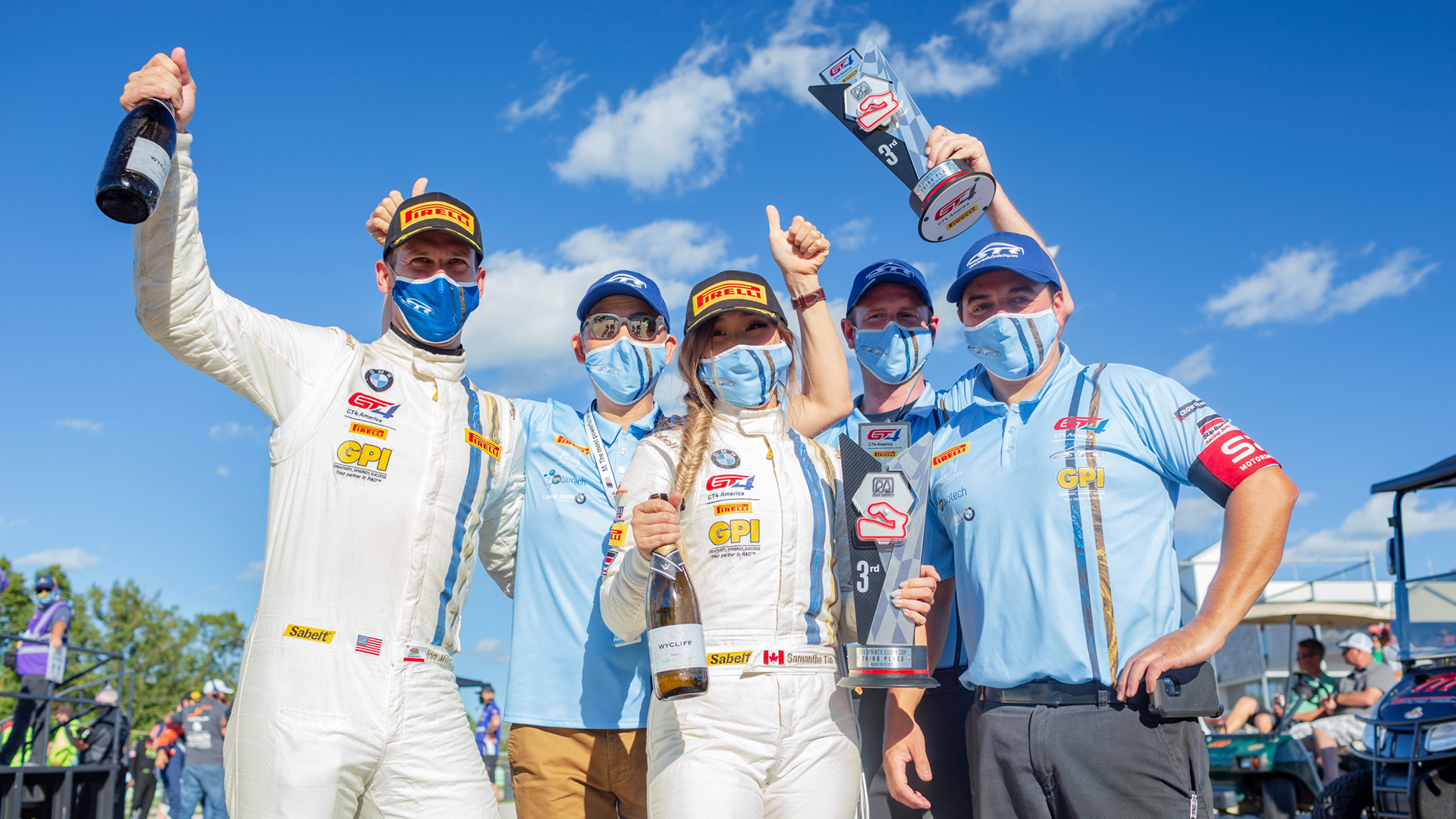 Sunday morning, all 21 GT4 America cars took the green flag under sunny skies and cooler weather. It was a very busy first lap filled with action as Samantha Tan and Harry Gottsacker began their stint. Gottsacker drove brilliantly and gained one position within the first few corners. By Lap 2, a full-course caution was brought out due to contact between two cars, leaving the #16 Mercedes AMG stopped on track.

On the re-start, Tan got caught when the car in front of her hit the brakes as they were going up the hill and a Porsche passed her at the green flag. But, the Canadian driver who was carrying a lot of speed, went after him and got by him. Again, Tan showed what she was made of as she drove hard, battling up front with some talented drivers. Unfortunately, on Lap 9, she got pushed off track.

Tan stated: “I was having good battles up front, running 5th overall when an Aston Martin pushed me off the exit at Turn 8, which caused me to lose five positions, as I lost some speed coming through the carousel into the kink. But, I kept up until I handed the car over to Jon.”

At half-time, Nick Wittmer took over from Gottsacker and managed to score another podium for the Team, finishing 2nd in class, 4th overall. Wittmer’s #28 BMW M4 GT4 was the highest finishing BMW in the race. “I was all alone out there” said Wittmer.”I just wanted to finish and get some points.”

Meanwhile, Jon Milller was having a solid drive holding off Anderson’s #7 Porsche (AM Class) behind him right to the end, placing 4th in Silver class.

“Today was a fun race”, said Miller, but we just weren’t racing with anyone in our class. Not sure what was going on, but our car lacked front grip today, so the lap time just wasn’t there, from the moment I got in. I left pitlane with a fast Porsche on my bumper, and had a fun clean 35-minute scrap with him. I think we maximized today. It just wasn’t where we wanted to be.”

“There were plenty of huge positive takeaways for Samantha this weekend, but with the way things are shaking up, the Silver Championship is going to come down to the wire. Only 4 races to go!” he added.

After the race, Gottsacker commented: “We rebounded today and put the 28 back on the podium, where it belongs! Thanks to the team for all the efforts last night to get it put back together. Nick built on the progress I was able to make early, and ran a strong race like he always does. We’re going to keep fighting our way back forward in the championship.”

Samantha Tan added: “We got some really good points this weekend for the championship. It’s looking really close going into COTA”.

Once again, everyone on the Team deeply appreciated the assistance of BMW technicians who are part of the BMW STEP GROUP program.

The ST Racing Team is already looking forward to the next race at the Circuit of the Americas, on Sept 17-20.