AUSTIN, Tex., – Sunday morning at Circuit of the Americas, Flying Lizard Motorsports driver Michael Dinan unofficially secured the GT4 America Sprint Am championship in the #210 Aston Martin Vantage GT4, earning the team its seventh championship to date. Dinan, together with co-driver Robby Foley, celebrated another SprintX Pro/AM win in the #21 Aston Martin Vantage GT4. After almost a full season of technical gremlins, the #30 McLaren of Erin Vogel and Michael Cooper enjoyed a smooth run, finally able to run within the GT4 America pack.

“This has really been an amazing season for us,” said Program Manager Darren Law. “Focusing on not only good results every weekend but also keeping the big picture of the Championships in mind has been a priority for us and to have already clinched the Drivers Championship with Michael Dinan in the Sprint class with one weekend to go is a testament to the entire effort.

The SRO GT4 class is so competitive and there are a lot of great teams and drivers. With all of the changes in the series schedule a lot of pressure was put on the team and drivers this year. Michael has come a long way in a short time as a driver and Robby Foley has been a very big part of this. They work well together and Robby’s mentoring of Michael is really showing.

Knowing he would only be able to participate in two of the three races in the weekend, Dinan and Flying Lizard Motorsport entered Sprint race one with the goal to maximize as much as possible. He started third overall, and got shuffled back a few positions as the field aggressively made it through the opening turns. Holding second in class with a comfortable gap ahead and behind, he charged from fourth overall. He made quick work of his gap to the #91 of Jeff Burton, the Am class leader. With 22 minutes remaining, he made the pass and easily pulled away, with no pressure from behind, taking his first win of the weekend.

Due to a family commitment, Michael Dinan missed Saturday’s race activities, tightening the battle for the Sprint and SprintX driver and team championships. The absence forced Dinan to start the No. 210 Aston Martin from the rear of the field, though as soon as the green flag waved, he charged forward, passing two cars by the exit of turn two. The following lap, he gained another position, executing every corner to get closer to Paul Terry. Terry did everything he could to keep the Rearden Racing Aston Martin Vantage GT4 as far ahead from Dinan as possible, but with every lap, Dinan continued to inch closer. With less than 20 minutes remaining, Dinan had made it to the front pack, engaging in a three way battle for the Am class lead. He made it to the front just before a full course caution came out, resulting in the field being brought back together for a sprint to the finish line. Dinan stayed cool and collected, quickly creating a comfortable gap over his competitors. He finished third overall and first in class, unofficially taking the Sprint Am driver title. 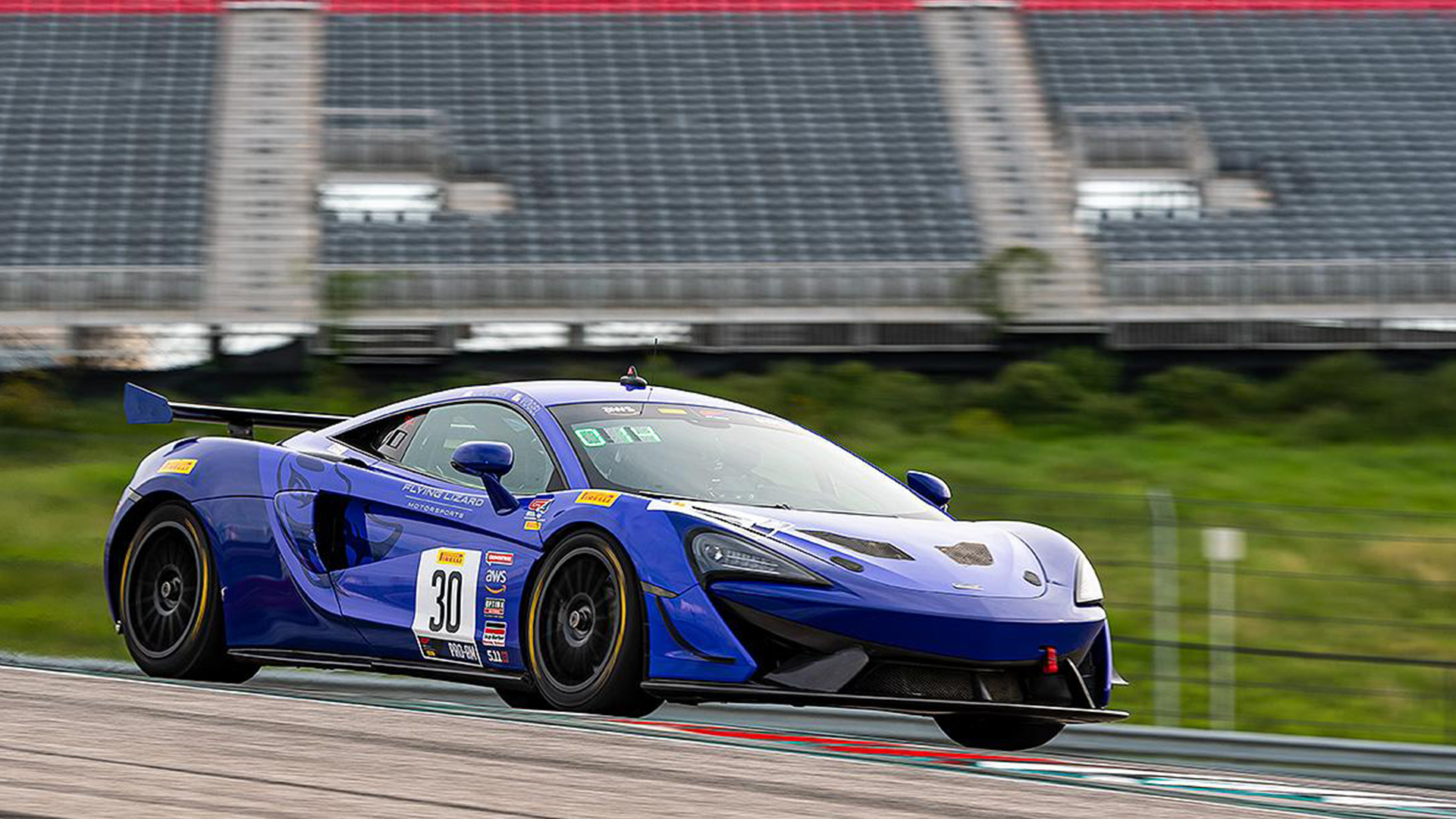 Michael Dinan and Robby Foley began SprintX race standing second in the driver points with Flying Lizard leading the team championship. With just one of two races to earn points, the pressure was on to earn the best result possible. Dinan started the race in the No. 21 Aston Martin from fifth place over all. Again, shenanigans in turn one shuffled the Aston Martin back two positions in the opening turns, but an early caution period brought the field back together and Dinan close to the competition. Dinan had a good battle with the No. 63 of Ben Anderson, eventually taking fifth place overall and the class lead as they reached the halfway point. Foley took over the driving duties just past the halfway point, immediately joining a three way battle for fourth place overall, and advanced to fight the No. 36 of Colin Mullan for second place. At the end of the 60 minutes, Foley had secured the Am class lead, finishing second overall. The result brought the pair within three points of the SprintX pro/Am class leaders.

Finally freed of technical gremlins, Erin Vogel started race one from 17th overall in the No. 30 McLaren. Grateful to finally run trouble free with the field, the rookie GT4 America driver was able to enjoy some exciting pack racing in the opening laps. She managed to avoid several incidents, one of which resulted in a competitor dropping oil on course. Enjoying a clean run, she climbed up to 16th overall and eighth in class before the mid-race full course caution. Vogel pitted as soon as the pit window opened, allowing Michael Cooper to take over for the second stint. While his run was a quiet one, Cooper climbed up to 15th overall with ten minutes left on the clock. While the field had spread out during his stint, Cooper was able to put a comfortable gap to the cars behind him, climbing up to eighth in class and eleventh overall.

After a competitive run the previous day, the McLaren 570S GT4 pair of Michael Cooper and Erin Vogel looked strong heading into Saturday’s race two. Starting from P12, Cooper had an action packed opening stint, with the field going three wide throughout several turns in the first lap. The battle with the No. 91 Reardon Racing car resulting in some light contact as the pair raced on. Cooper finished his stint in 12th, and after a smooth driver change during the mandatory pit window, Vogel took over to finish the race. She rejoined in 14th overall and 10th in class, with a decent gap ahead and behind. She finished a relatively calm stint in 13th overall, earning another 10th place class finish.

“With more championships to be decided, we still have a lot on the line at the final race of the year at Indianapolis in two weeks,” concluded Law. “We are very close in points for the Sprint-X Driver and Team Championships, as well as the Team Championship in Sprint. We are also still looking for Erin to continue her run to a podium finish with Michael Cooper in Sprint-X. She has had a difficult season as far as tough luck with car issues but we had a solid run this past weekend and look to close out the year with another good run at Indianapolis.”

The final rounds of the Sprint and SprintX Championships will take place at Indianapolis Motor Speedway (IMS), October 2-4. Each series will hold two final race events, and the race weekend will also be open to fans, a first for IMS this season. For full event information, visit gt4-america.com.

This was a great weekend for the team. We were able to see the improvements that we’ve made throughout the season with our performance this weekend compared to the opening weekend at COTA in March. Everyone at Flying Lizard has done a fantastic job and it has showed, winning all three races this weekend. To clinch the sprint championship is a great achievement for us and I can’t thank the whole team, Robby, and all of my supporters enough for sticking with me through everything. I’m looking forward to racing at Indy for the first time in two weeks and fighting for the SprintX championship win. My first race I ever attended was the F1 Grand Prix in Indy in 2004, so it holds a special place with me. Go Flying Lizard!

We had a great weekend. Started off with a nice win in SprintX, which gave us the points lead at that time. Unfortunately we had to miss the second race, but because of our strong run the previous day, we’re only three points behind heading into Indianapolis. Michael did an amazing job in Sprint, winning both of his races and clinching that championship. It was a strong weekend for everyone on the team, and Michael is doing a great job this year. We’ll try to take the momentum to Indianapolis and another championship.

Even though we don't have much to show for it on the race track, I'm happy with this weekend's results. The team has been working incredibly hard and was able to track down an electrical issue that's been haunting us on and off for over half the season, and which has stolen important development time from us during testing and practice throughout the past few months. With one race to go in the season I'm just hopeful that we can find some of the pace we've been lacking recently, now that we'll be able to take full advantage of our remaining track time. We're all excited to end the season at an iconic track like Indy, and it will be a good place to have some fun and wrap up a challenging season on a positive note.

I got a great start in race two, so that was something. The guys spent a lot of time this weekend and the weekend before working to get our car issues solved. They got the intermittent power issue solved, but we still have a few little gremlins here and there. They’ll keep working on it and we’ll keep fighting through and hopefully be a little stronger at Indy. Erin did a really good job in race two, and she was super consistent. Given the car she was dealing with, she was punching way above her weight. She’s making progress all the time. We just need to get a few things sorted.