After a busy offseason of planning and preparation, the stars and cars of SRO America are ready to wave the green flag on the 2021 season at picturesque Sonoma Raceway in Northern California. New teams, drivers, manufacturers, and series partners are set to join series stalwarts for a year of racing that promises to be as competitive as ever.

Nearly 100 cars across four SRO America championships are expected for the season opener at a circuit that is as revered as it is challenging. Sonoma Raceway has hosted some of the finest road racing drivers in the world since it opened in 1968, and its highly-technical 12-turn layout that features 160 feet of elevation change over the 2.385-mile lap has challenged them all.

Headlining the action will be the Fanatec GT World Challenge America powered by AWS series, featuring global GT3-spec cars from manufacturers like Lamborghini, Acura, BMW, and Aston Martin.  For the third consecutive year, the race format will feature a pair of 90-minute races over the race weekend with live pit stops that include refueling, tire changes, and a driver swap. 2021 marks the return of the all Pro class after a year-long hiatus, but the format and class structure of SRO America's premier series remains unchanged otherwise.

This consistency, coupled with additional incentives from the series and manufacturers alike, has led to significant year-on-year growth in series. New for 2021, series champions will earn entries and logistical support to compete in the 2022 Total 24 Hours of Spa, the SRO's crown jewel event. Additionally, manufacturers have upped the ante by providing significant prize bonuses to their partner teams taking part in the full seven-event campaign.

DXDT Racing, a rising force within the championship, will step up to fielding three Mercedes-AMG GT3 Evo cars this season. Defending teams' championship winners Racers Edge Motorsports are back in the fold as well and will once again campaign an Acura NSX GT3 Evo. They will be joined by the Sonoma-based outfit K-PAX Racing which returns to the series on a full-time level. They will be racing in the Pro class with a new manufacturer this year: Lamborghini.

Series veterans Wright Motorsports are back in the mix with a Porsche 911 GT3 R, alongside a Mercedes from Winward Racing and a BMW M6 GT3 from Turner Motorsport. TR3 Racing also returns for the new season, but switching from Ferrari to Lamborghini machinery. The grid also features multiple teams stepping up to GT3 competition from Pirelli GT4 America such as Ian Lacy Racing (Aston Martin), Compass Racing (Acura), and Rearden Racing (Lamborghini). And joining the series for the first time will be world-renowned Ferrari squad AF Corse, with more teams likely to finalize their programs in the coming weeks.

New for 2021, GT sprint racing is back with GT America powered by AWS

Brand new under the SRO America umbrella is the GT America powered by AWS series that features GT3 and GT4-spec machinery in fast-paced, single-driver sprint races for aspiring FIA Bronze-rated drivers to test themselves against their peers. The series will again feature a pair of races on a race weekend, each 40 minutes in duration with no live pit stops.

GT America is viewed both as a potential training ground for those drivers who wish to gain experience in high-level racing cars in preparation for joining GT World Challenge America, as well as a destination for racers who want to experience a professional racing paddock without the high demands of racing against fully professional lineups.

21 cars are set to take up the challenge across the GT3 and GT4 categories, including entries from established teams like DXDT Racing, GMG Racing, Classic BMW, Wright Motorsports, and more representing manufacturers like Aston Martin, Audi, BMW, Porsche, Lamborghini, and Mercedes-AMG

With the single-driver race format for GT4 cars now nestled into the GT America series, Pirelli GT4 America returns as a fully two-driver affair. Consistently popular with fans, teams, and drivers alike, the SprintX format of 60-minute races with a driver change has continued to flourish.

With 32 entries representing eight different manufacturers ready to answer the bell at Sonoma, this is the most competitive GT4-based series in North America. Proven by many of last year’s championships coming down to the final race of the season.

Established teams like NOLASPORT, GMG Racing, BimmerWorld Racing, The Racers Group, and Stephen Cameron Racing are back but will face competition from newcomers like Heart of Racing Team, WR Racing, Smooge Racing, and others with the Pro-Am, Silver, and Am class championships all expected to be as hard-fought as ever.

TC America powered by Skip Barber continues to go from strength to strength, welcoming the renowned racing school on board as a new presenting sponsor as well as the introduction of the new TCX class to the championship for 2021. TCX will focus on the future of touring car racing with the new BMW M2 CS Cup car set to prove its mettle on North American shores.

The TC class continues to grow with more and more manufacturers adopting the turn-key model that allows teams and drivers to purchase a race-ready touring car directly from the OEM. The BMW presence will be as strong as ever in the class with multiple M240iR Cup cars entered, but they will be joined by offerings from Mazda. Hyundai and Honda, as well as the trusty Nissan 370Z TC Spec from the veteran TechSport Racing team.

In the TCA category, an eclectic mix of small-displacement touring cars is once again on offer. Entries this year include the ever-popular MINI Cooper, the Hyundai Veloster Turbo TCA, the Honda Civic Si, and a trio of Toyota 86s.

Teams and drivers will take to the track for a Series Test Day on Thursday, March 4th before Official sessions begin on Friday. Every race will be streamed live for free via SRO’s GT World YouTube Channel for fans to follow all the action from Sonoma Raceway. 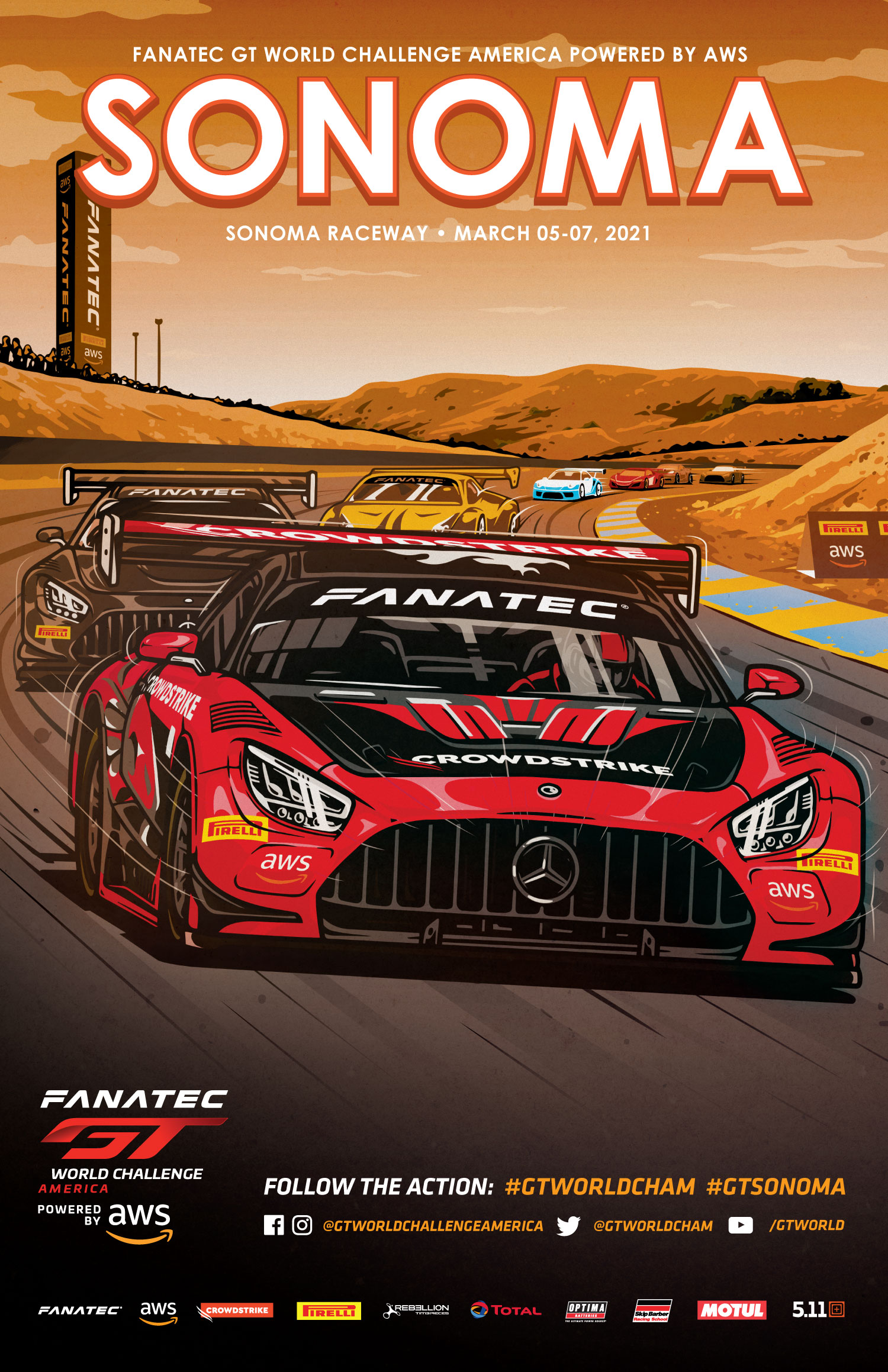