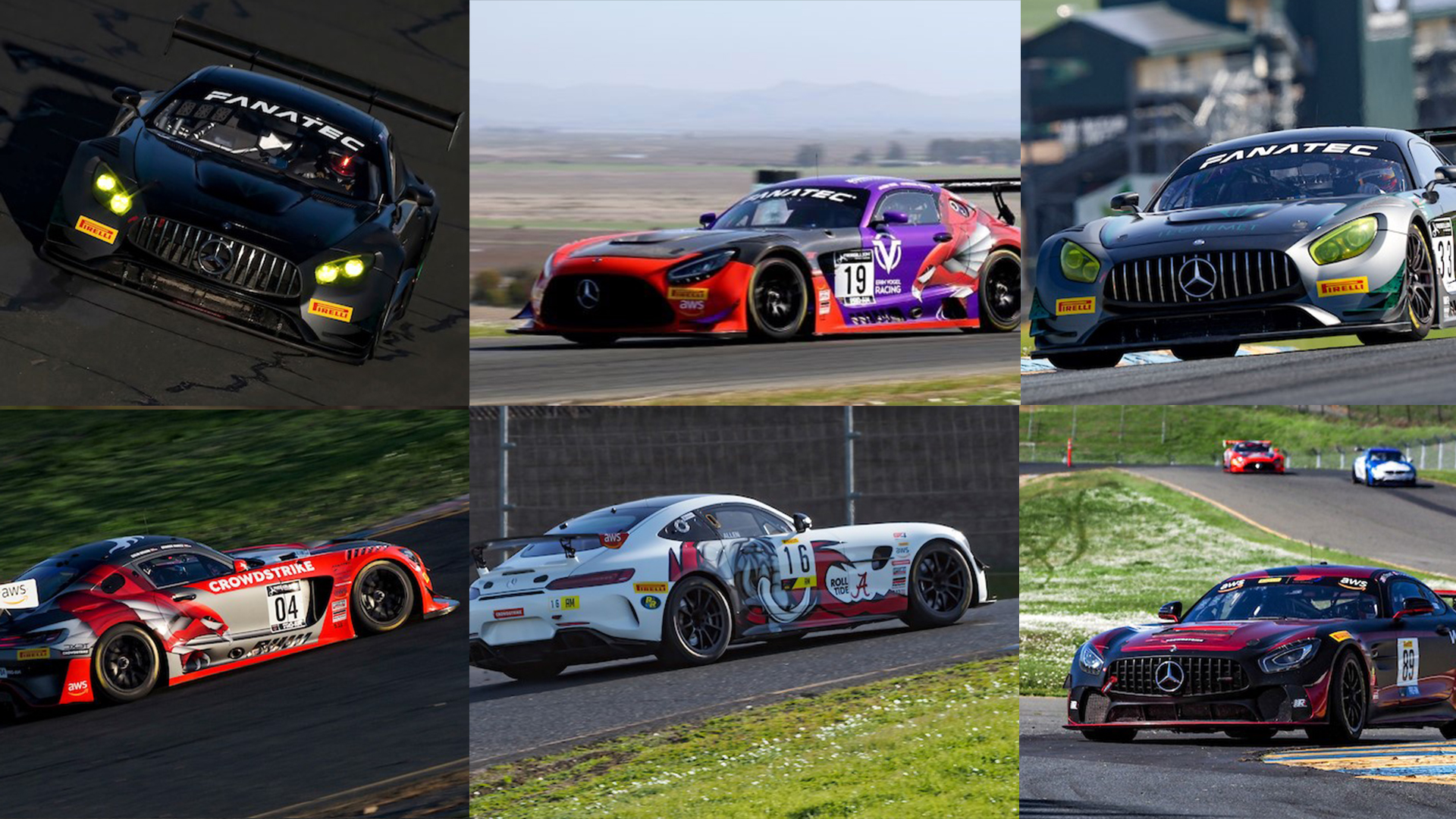 Team owner and driver David Askew returns with Ryan Dalziel for their third-consecutive full season together co-driving the No. 63 DXDT Racing Mercedes-AMG GT3.

The sister No. 04 DXDT Racing Mercedes-AMG GT3 also returns in 2021 for its third-straight season with co-drivers George Kurtz and Colin Braun.

The No. 63 and No. 04 entries compete alongside a third DXDT Racing team with former World Challenge champion Michael Cooper joining DXDT, along with teammate Erin Vogel. Cooper and Vogel make their GT3 debut together this weekend co-driving the No. 19 DXDT Racing Mercedes-AMG GT3.

The debuting GT America powered by AWS series is a single driver championship with primarily amateur (“Am”) or bronze rated drivers. The championship, which runs a pair of 40-minute races each weekend, is open to both GT3 and GT4 competitors.

Kurtz makes an exploratory one-off start in the new series this weekend at the wheel of a second No. 04 DXDT Racing Mercedes-AMG GT3.

Two past Sonoma race winners and a returning team with a debuting driver line-up comprise the trio of Mercedes-AMG GT4 competitors in Pirelli GT4 America and GT America at Sonoma.

The Mercedes-AMG GT4 driving pairs of John Allen and Kris Wilson, and Christian Szymczak and Kenny Murillo, each came home winners in their most recent races at Sonoma.

Allen and Wilson, who now co-drive the No. 16 Mercedes-AMG GT4 for the new Capstone Motorsports team, scored a Pirelli GT4 America “Am” class victory last year at Sonoma.

The all-California Murillo Racing duo of Szymczak and Murillo last competed at Sonoma in 2019, where they earned a Pro-Am class win and an overall Pirelli GT4 America victory. They seek repeat wins this weekend in the No. 72 Murillo Racing Mercedes-AMG GT4.

RENNtech Motorsports also returns to Pirelli GT4 America for the first time since 2019 with the debuting driving duo of Ross Chouest and Aaron Povoledo.

Chouest and Povoledo co-drive the No. 89 RENNtech Motorsports Mercedes-AMG GT4 in each of the weekend’s two 60-minute Pirelli GT4 America races.

The RENNtech team is also set for the GT4 class in the inaugural GT America race that will see Chouest drive the No. 89 in both the Saturday and Sunday races.

After a full day of practice Friday and qualifying for all series on Saturday morning, the weekend’s schedule of six races begins Saturday afternoon at Sonoma.

The inaugural GT America powered by AWS 40-minute sprint kicks the racing off at 12:10 p.m. PST. The first 90-minute Fanatec World Challenge powered by AWS race of the season follows with a 2:15 p.m. PST race start, while the opening 60-minute Pirelli GT4 America race closes out the first day of racing action with a 4:05 p.m. PST green flag.

Sunday’s final day of competition begins with the second GT America race at 8:45 a.m. PST. Pirelli GT4 America closes out its weekend with a 10:55 a.m. PST start for its second one-hour race before the Fanatec World Challenge finale brings the weekend to a close with a 1:15 p.m. PST scheduled start time.

David Askew, Driver – No. 63 DXDT Racing Mercedes-AMG GT3: “We have a strong relationship with Mercedes-AMG who are dedicated to their product and continue to help DXDT field fast race cars. Sonoma is a momentum track, well suited to the Mercedes-AMG GT3. It tends to be a good all-around car and we are in it for the championship. Consistent podium finishes are what we are after and we expect to win races and ‘be there’ when it counts. On the World Challenge side DXDT is running three teams this year and competing in the debut race of the new GT America series. We just came off of a successful test running all of the cars at Sonoma last week. Everyone is ready to go.”

Ryan Dalziel, Driver – No. 63 DXDT Racing Mercedes-AMG GT3: “Each year as a team you have to discuss looking at other options out there, but to be honest, it has been a short discussion each time. We love our Mercedes-AMG GT3s and our Mercedes-AMG family. Being a front running GT3 car globally, a lot of information is provided to us on what is being learned oversees. I don’t see DXDT leaving this great partnership any time soon, and as you can see from our growing car count, up to five Mercedes-AMG GT3 under our tent, it's clear lots of clients share our passion! We are in a really good place. Not just the No. 63 car, but DXDT in general. We have made quite a few changes in the off season, so on the whole we are ready for our best year yet.”

George Kurtz, Driver – No. 04 DXDT Racing Mercedes-AMG GT3: “We are
ready for this challenge. The CrowdStrike and DXDT teams have made great progress in our offseason testing program. Colin and I were close to an elusive Sonoma victory a year ago. Pursuing a clear victory is something I definitely want to achieve this season, and we’re putting in the work to make it happen.”

Colin Braun, Driver – No. 04 DXDT Racing Mercedes-AMG GT3: “Now that George and I are entering our third full season of driving the Mercedes-AMG GT3 I think that level of experience and familiarity with the car will really help us. We were able to do the Spa 24 Hour race last year as well and get a ton of seat time, and I know there is no substitute for that. George always puts a huge and focused effort into everything he does, so I expect an amazing season. I feel like Sonoma was a weekend last year where we showed we were ready to take the next step as championship contenders and put all the pieces together. It’s great to open the season at a track like Sonoma.”

Philip Ellis, Driver – No. 33 Winward Racing Mercedes-AMG GT3: “I’m super happy to share the car with Russell again and the boys at Winward Racing. We have proven to be a successful combination and want to take some momentum from our Rolex 24 At Daytona win into this championship. It will be tough, but we are up for it. It is an all-new experience for me indeed, as I have had many with Winward already these past months. Sonoma is a new track to me, and I have only done the endurance series with SRO so far, but it‘s still fairly similar to other sprint racing formats which I know. There’s a big mix of drivers and cars which should make up for an interesting race. I can’t wait to get going and head into this challenge together with Russell!”

Kenny Murillo, Driver – No. 72 Murillo Racing Mercedes-AMG GT4: “I’m just really excited to race a Mercedes-AMG GT4 with Christian Szymczak. He is one of my favorite people on the planet, and to share the car with him is a dream come true. When Christian and I looked back on it together, we have done four races in SRO GT4, won overall twice, won our class three times and placed fifth the other race. It’s been really successful, we had a blast doing it, and it would be a shame to stop now. We want to continue having fun. It’s definitely to our benefit that the season opener is Sonoma. We love it there. The last time we were there we won overall and we got third in class in the other race. Having a good Mercedes-AMG GT4 under us makes the weekend so much more fun. In 2019 our strategy, our setup, our training and driving style - saving the tires - that’s what won us the race at Sonoma.”

Kris Wilson, Driver – No. 16 Capstone Motorsports Mercedes-AMG GT4: “We can’t wait to get started. We just had a test at Sonoma two weeks ago to make sure we have all our processes in place. Everybody seems to be working well together, and our Mercedes-AMG GT4 hot rod is running great. Most of the guys on the team were with us last year running the Mercedes-AMG, so we have built a pretty good notebook of setups for the car even though Capstone Motorsports is a new team. You never know how you’re going to stack up against the competition until you get out there and start racing them, but we have a good foundation, and the Mercedes-AMG GT4 seems to do everything well. It has a lot of true racing components like the gearbox and electronics, and I love its sound and the feel.”