Though Flying Lizard’s first ten years in the sport campaigned only Porsche efforts, but in the last five years, the team’s operations have expanded on a massive scale to also include several racing and testing efforts with various manufacturers including Audi, McLaren, Lamborghini and Bentley. The expansion over the last five years has allowed the team to showcase their level of technical expertise and capabilities of creating race winning efforts and high quality testing programs on various platforms. Unveiled in the summer of 2018, the Aston Martin Vantage GT4 will be the newest manufacturer to add to the team’s race program roster.

“We are so excited for what 2020 has in store,” said Program Manager and Team Principal Darren Law. “We have been reviewing the different platforms for the GT4 class and having spoken to the manufacturers as well as doing our analysis of each of the cars, the Aston Martin always came to the top of our list. It’s a new car that has a proper engine and transmission package and we feel it will be a very competitive car.”

The power of the four liter, V8 Twin Turbo engine will be subject to regulation by the Balance of Performance, a system used in sports car racing to make the field as equal as possible on the various circuits the drivers will compete on for the 2020 race season. The lightweight aluminum chassis of the Aston Martin Vantage GT4 is based on the production car, housing a 4-liter, V8 twin turbo.

Dinan, the primary driver for the Lizard GT4 program made his rookie debut in GT4 America in 2019, and proved to be a quick study, earning three podiums and ten top-five finishes with driver coach and co-driver Robby Foley.

“Last year, Michael showed a lot of potential and speed,” said Law. “Now that he has a full season under his belt, he will have a better understanding and more knowledge of what it takes to compete for a championship. Robby does a tremendous job both behind the wheel and in working with Michael. He’s a great asset to this program.” 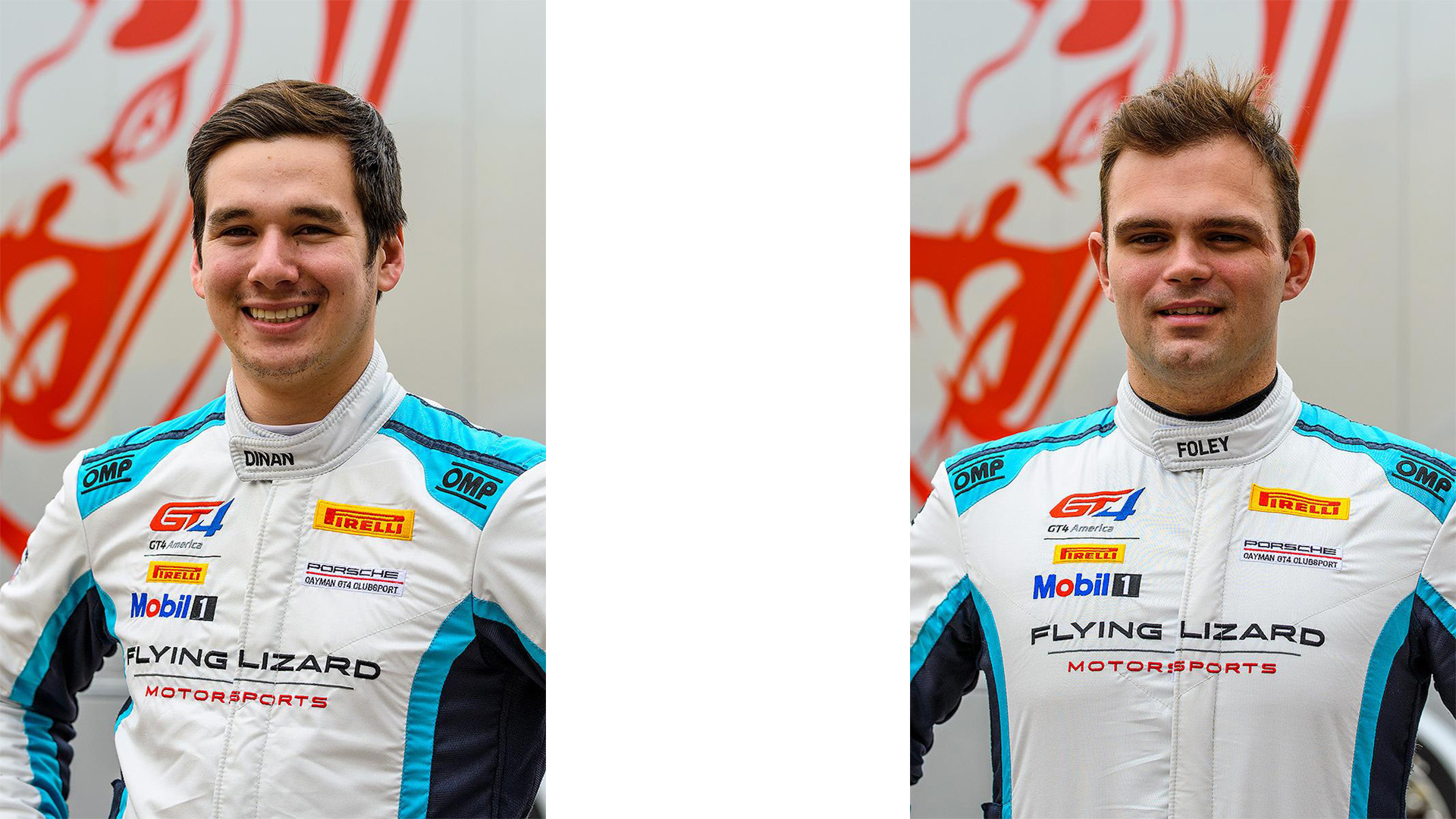 Continuing its tour of the most iconic race circuits and temporary street courses North America has to offer, the 2020 season will see Flying Lizard Motorsports return to most of the same tracks as the 2019 season, with the addition of Indianapolis Motor Speedway in October. Opting to miss the two street courses on the calendar, Dinan’s season will consist of seven Sprint double headers, and seven SprintX double headers with co-driver Robby Foley.

“I’m ready and excited to take on my second season in SRO GT4 America with Flying Lizard Motorsports,” said Dinan. “I've learned plenty of valuable lessons in my first full season of racing that I'll be looking to improve on in 2020. The new car is exciting, so hopefully we can compete for wins and podiums right away.”

“I’m excited to be back with Flying Lizard Motorports and Michael for the 2020 season,” said Foley. “We had some ups and downs so we'll be looking to improve on what we learned and attack the 2020 championship in our new Aston Martin GT4's. It's an exciting opportunity to campaign these new cars. They've been successful world-wide so far, so let’s hope we can add some wins and podiums to our trophy case.”

The 2020 GT4 America season will begin at Circuit of the Americas, March 6-8, with both the Sprint and SprintX championships. Dinan will compete in four races that weekend, two with co-driver Robby Foley. For full event and series information, visit gt4-america.com.

Based out of Sonoma, California, Flying Lizard Motorsports is one of the most iconic sports car teams in motorsports, having celebrated six driver and team championships, as well as competed internationally at the 24 Hours of Le Mans eight times. The team currently races in Pirelli GT4 America, Porsche Trophy West, National Auto Sport Association, and Porsche Club of America.

The Lizards burst on the American Le Mans Series scene in 2004, competing in the GT class until 2012. In 2013, the team moved to the GTC class, still competing in legendary events such as the 12 Hours of Sebring and 24 Hours of Daytona. In 2014, the team expanded its program to include running two Audi R8 LMS in the TUDOR Championship, and in 2015, again expanded the program to include two Porsches in Porsche Club racing. Flying Lizard closed out the season with a dominating win at the 25 Hours of Thunderhill with Toyo Tires, a win they repeated in 2016, 2017, and 2018. For more information, visit lizardms.com. Flying Lizard Motorsports has proven to be a championship contender no matter the race series or race car.