The California-based squad celebrated three podiums at rounds one and two at Circuit of the Americas, with Michael Dinan and Robby Foley racing in the Sprint and SprintX championships in the No. 210 and No. 21 Aston Martin Vantage GT4. Rookie Erin Vogel and co-driver Michael Cooper earned a top five finish in the opening weekend, racing the No. 30 McLaren 570S GT4 in the SprintX Series.

“We started the 2020 season with such great momentum, and then COVID-19 happened, and everything came to a halt,” said Program Manager Darren Law. “But we’re back, have been able to get some testing done, and we’re excited to go racing again.”

The team previously completed a private test at VIRginia International Raceway with Dinan in the Aston Martin Vantage GT54 and Vogel and Cooper in the McLaren 570S, in preparation for this weekend’s event triple header.

The new Aston Martin Vantage GT4 seems well suited to Michael Dinan, who earned one win and two additional podium finishes in four races at Circuit of the Americas. The young American will run a total of six races this weekend between the single driver Sprint races, and the SprintX format, which requires two drivers to a car.

Although Robby Foley was unable to attend the team’s test at VIRginia International Raceway, he was able to get back in a race car and shake the cobwebs off last weekend at the IMSA WeatherTech SportsCar Championship’s second race of the season at Daytona International Speedway. He’ll race alongside Michael Dinan in the SprintX Championship in the No. 21 Aston Martin Vantage GT4.

"I can't wait to get back racing with Michael and Flying Lizard Motorsports," said Foley. “The last few months have been tough and impacted everyone differently, but I'm looking forward to getting back to the track in a way that's safe for everyone."

Erin Vogel’s rookie season has been one to remember so far, as the sport has had to react to the global pandemic. However, Vogel has been taking it in stride and made the most of her test last month, which marked her first time at VIRginia International Raceway. She improved with each lap to consistently put in competitive lap times and should put in a strong performance this weekend in the No. 30 McLaren 570S GT4. 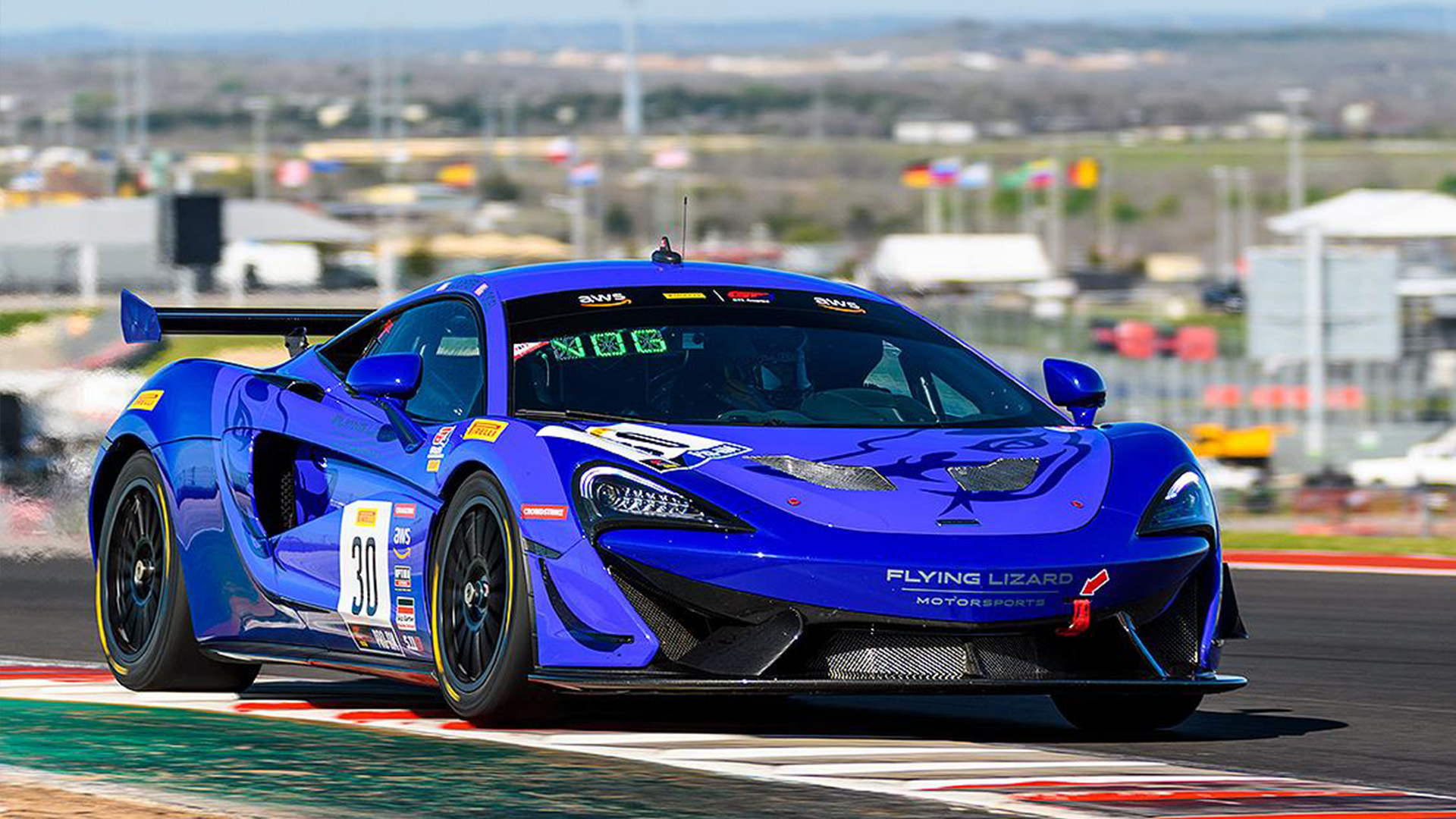 “I’m very excited to be back with the team next week, and back in a racecar,” said Vogel. “Despite the challenges over the last few months, we've been able to get some much-needed updates done on the car, and we were even able to squeeze a little testing in as things were opening up again. VIR is a beautiful facility and a challenging course that will provide for great racing. I hope with the work we've done that we'll continue to improve our standings within the class.”

McLaren Factory Driver Michael Cooper also completed last month’s test with Vogel, providing insight for the McLaren, setting the base laps that the team will start from this weekend. Cooper represented Flying Lizard Motorsports twice during the break, earning one win and another podium in IMSA’s virtual series, the iRacing Pro Challenge, and the iRacing Challenge.

“I’m glad we’re getting back to racing,” said Cooper. “The team was able to get the McLaren updated which should make us more competitive going forward. We were also able to test the 570S at VIR, which went really well.  VIR is always a great track to visit and the staff there have done an incredible job to put on this event along with everyone at SRO.  Hopefully the procedures that have been implemented are effective and we can go back to racing full time.”

The Format
Due to the cancellation of races and rearranging of the schedule because of COVID-19, each series this weekend will run three races instead of the standard two.

The Pirelli GT4 America Sprint championship consists of one driver completing three 50 minute races where no pit stops are required. The driver will have a 15 minute qualifying session for race one, and their starting position for race two is determined by each competitor’s fastest lap in race two. Michael Dinan will race the No. 210 Aston Martin Vantage GT4 in the Sprint championship.

The Pirelli GT4 America SprintX championship expands to consist of two drivers together completing three sixty minute races, with one pit stop required. Each driver will participate in a 15 minute qualifying session to determine their starting position for one of the two races. The first driver of the pairing will start race one, and the second driver will take over during a mid-race pit stop to complete the event. The order will swap for race two, with the second driver taking the opening stint, and the first driver finishing the race.

The Track
Located in Alton, Virginia, VIRginia International Raceway is considered one of the favorite tracks of sports car racing, offering 3.27 miles of flowing turns, two back straights, sweeping elevation changes and the iconic “Oak Tree” turn. The track opened in 1957, created by a group of men armed with nothing but a bulldozer. The track closed down less than 20 years later and reopened in 2000, transforming into a country club type atmosphere for track days and professional race events. Unlike street courses where spectators are stuck to their purchased grandstand seat, at VIR fans can wander around the rolling hills of Alton and view the track from almost any corner. Sadly, due to COVID restrictions, the track will be closed to the public this weekend.

Tune-In
Live streams of qualifying and both races will be held on GT4-America.com and the GT World YouTube Channel. Fans can listen to the race live on SiriusXM Radio on channel 202, or on the app at 969. Live Timing will be available here. Tape delay broadcasts of the events will air on CBS Sports Network June 11 th at 8:00PM Eastern, and the SprintX at 10:00PM Eastern.