The weekend started on Friday when ST Racing welcomed two technicians from the BMW Race Crew Program to be part of the crew for the event. They were joined by other delegates from BMW North America and soon, everyone was busy getting the M4 GT4 race cars ready to hit the track.

Three of the four ST Racing drivers had driven at Portland last year, but Samantha Tan’s co-driver Jason Wolfe was discovering the 1.97-mile track for the first time this weekend. “The track is a lot of fun to drive” said Wolfe. “It’s a lot faster than I thought, being as short as it is, and has a lot of tight turns.” Teammate Harry Gottsacker said it was like “driving on a go-kart track.” 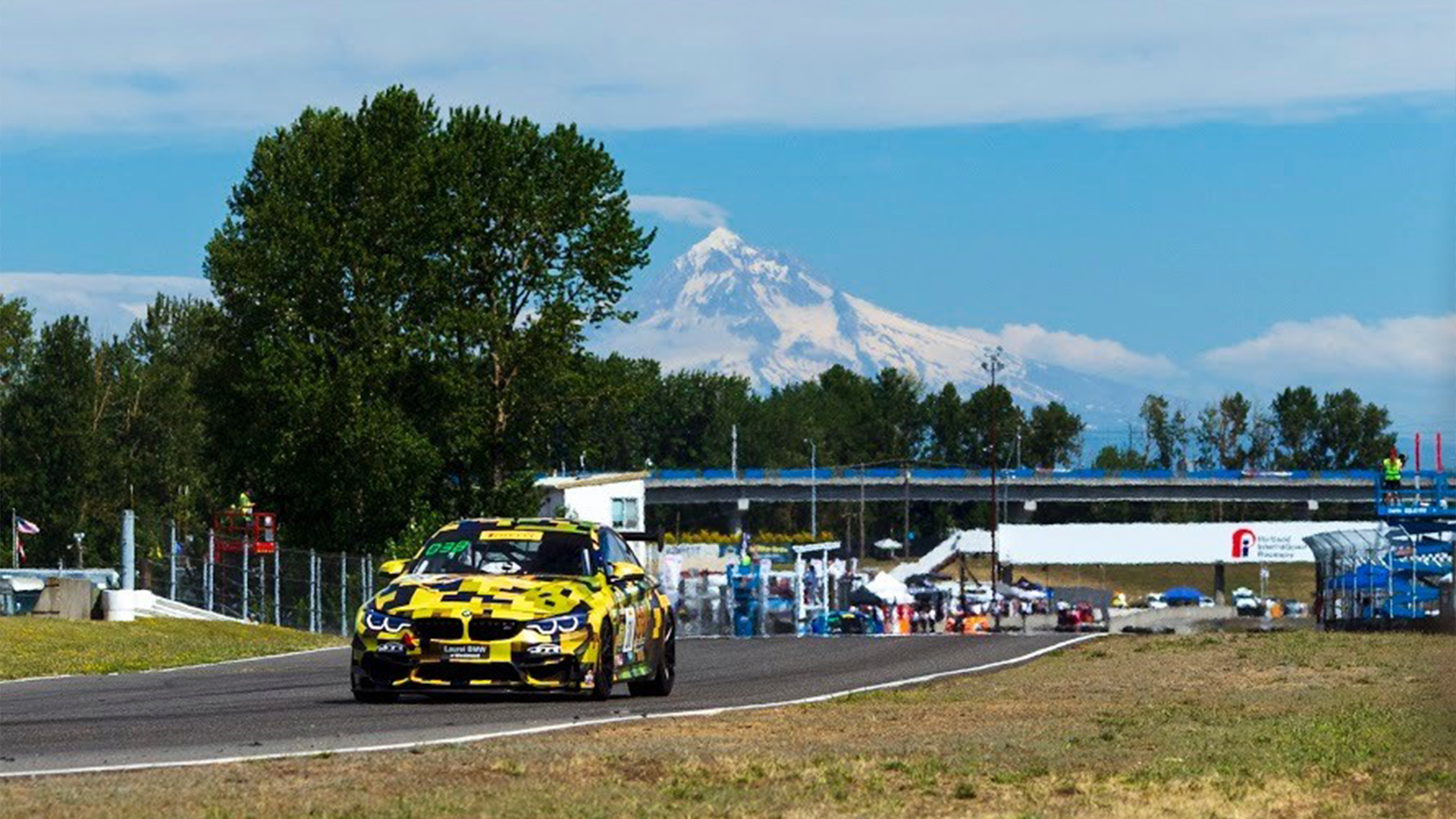 With perfect weather in the mid-70’s, everything seemed to go as planned. The first race of the weekend saw Jon Miller (#28) and Samantha Tan (#38) take the green flag and put on impressive drives going through a hectic Turn 1 among 19 other cars.

“Honestly, I thought I was going to get hit” said Tan. “Luckily I stayed out of the way. I kept with the pack the entire race and I conserved tires for Jason (Wolfe). He had an awesome drive. He made up 9 positions. Put us in Top 5, and 3rd in class. A really good day for us”, added the 21-yeara old Canadian.

Wolfe commented in his usual low-key demeanor: “The race was fun. Sam did a good job in her stint, keeping it up as far as she could. When I got in, I was able to put in some consistent laps and slowly work my way up the field, and we ended up 5th overall, 3rd in class.”

Jon Miller admitted he was still still learning about the BMW M4 GT4’s, the Pirelli PZero tires, and the setups. “Every time we come out, we have to be creative, we have to be on our toes, and be super competitive because of how tight this field is, and how strong our competitors are.” During his stint, Miller moved up to 2nd place on a great pass before coming into the pits for the half-time driver change.

“When I came in for the pitstop, the team crushed it. Awesome pitstop!” exclaimed Miller. “I gave the car to Harry (Gottsacker) and he took over the lead. Unfortunately, traffic didn’t go our way today, and we ended up 3rd overall, and 2nd in class. A great points day, and one step closer to the Championship” he said confidently.

As soon as Harry Gottsacker went out, it took just a few laps for him to take the lead. Unfortunately, lapped traffic caused havoc, and saw him lose the position.

“It was insanity out there” said the young Texan. “The track got real slick towards the end of that session. My goal from the start was to just keep the car clean and finish the race out front of that Audi, (we’re battling for the Championship), and we were able to do that flawlessly. All the guys at ST Racing performed a pitstop insanely perfect. Overall, a great day. The lapped traffic caused me some trouble, and I’m going to have some words with him, and see if we can work it out peacefully.”

At 2:00 pm on Sunday, the green flag flew for the second GT4 America SprintX race of the weekend. Once again, the perfect weather gave the track good grip and all four ST Racing drivers went out there and did their stuff. Jason Wolfe and Harry Gottsacker took the start in their respective #38 and #28 M4 GT4’s. The BMW machines favored the Portland circuit, as they were fast on the straightaways. The cars were perfect and the drivers were on fire. Wolfe and Gottsacker drove flawlessly and held 2nd and 4th positions respectively when they came into the pits at half-time.

When Samantha Tan took over from Wolfe, she showed some skillful driving while holding off the Murillo car right up until the checker flag. The television broadcasters were quick to comment on how Tan had made significant gains in her driving this past year and mentioned her increased focus and fitness.

Meanwhile, Jon Miller jumped into the #28 machine after Harry Gottsacker handed it over, and wasted no time charging up the field. Miller was unstoppable! By the time the race ended, he had built a 3 ½ second lead and captured the overall win, the win in Pro-Am class, and clinched the GT4 America West Championship. When he arrived in the pits at the end of the race, he was greeted by the elated ST Racing crew, the media, and the fans!

“This was a long-awaited dream come true” said Miller as he thanked BMW, everyone at ST Racing, and his talented co-driver Harry Gottsacker.

Here’s what they had to say:

Jon Miller (#28 BMW M4 GT4): “I love that word “Champion! Say it again, please. It’s a long time coming. And I’m really super proud to do it with this team, my co-driver Harry, and with this brand of car. BMW, St-Racing, Harry, what a combination this year. There’s a saying “I love it when a plan comes together” – Man, racing can be so brutal sometimes, but this year, things seem to have just fallen into place, and we’ve executed the plan pretty much every single time. That’s what it takes to win a Championship. And, to get the overall win and win the Championship on the same day is a dream come true.”

Harry Gottsacker (#28 BMW M4 GT4): “The race was awesome. I was thinking about it last night, wondering what the start was going to be like, and it went exactly the way I pictured it. Nice clean race. I made up one position, and was able to hold my ground for my stint. I was trying to make sure I could give Jon a really good race car. He did an amazing job, he went straight to the front with a big gap for the finish. I just can’t thank everyone at ST Racing and BMW enough for their support. It’s been a great season so far and I’m excited for Vegas.”

Samantha Tan (#38 BMW M4 GT4): “Jason started the race, kept it out front really well and was doing some really good laps. Halfway through the race, he handed it over to me. I did my best to maintain the pace with the amount of tire I had left. I tried to hold Jon (Miller) a little there, but he got by me in Turn 1. I think I was really consistent for the most part of my stint. At the end, the Murillo car was catching up to me at a fast pace, and in the very last lap, he and I were battling it out through the last corners, and I just stuck to the inside of the corners. We had a drag race right to the finish line. Oh boy, it was so close!  I hung on and ended up P2 today. Congrats to Jon and Harry for snagging the first place, so P1, P2 today for ST Racing. Amazing weekend overall. Can’t wait for Vegas.”

Jason Wolfe (#38 BMW M4 GT4): “Our race was good. We got second place. The start could have been better. We lost some time there, on the Mustang and we weren’t able to get it back, but we were running solid the rest of the time. Sam did a great job, she was able to hold off the Mercedes there at the end, and keep second place.”

ST Racing Team Principal Kenneth Tan: “It was an unbelievable and amazing weekend for ST Racing. We couldn’t ask for better. It was the best results we have had all year. We clinched the Championship, Sam and Jason came in P2, Jon and Harry P1. It was a very exciting race. I can’t thank this team enough. They did an awesome job, all of them. Thank you also to Colin, Dusty, Florian, and Victor at BMW Motorsports for all their amazing support.”

Be sure to join us for the GT4 America season finale on October 18-20 in Las Vegas.