The 2019 Pirelli GT4 SprintX campaign for the NOLASPORT team of Jason Hart and Matt Travis was essentially a tale of two seasons. The Pro/Am duo won the first five races and held a healthy lead in the championship at the midpoint of the season. But the racing gods are always ready to make things interesting and an 8th place finish in Race 2 at Watkins Glen led to only the second time all season the team finished outside of the top 3. It helped opened the door a sliver for the late season charging Stephen Cameron Racing team of Sean Quinlan and Greg Liefooghe. The championship came down to the last race of the season at Las Vegas Motor Speedway with only a single point separating the two teams. A late race duel between Travis and Quinlan saw Quinlan finish ahead to wrestle the title away from the NOLASPORT duo. In the end Hart and Travis finished only seven points out of the championship. The 2020 season presents some unfinished business for the team and they responded at the opener at Circuit of The Americas, winning both races. We caught up with them for this edition of Driver Download. 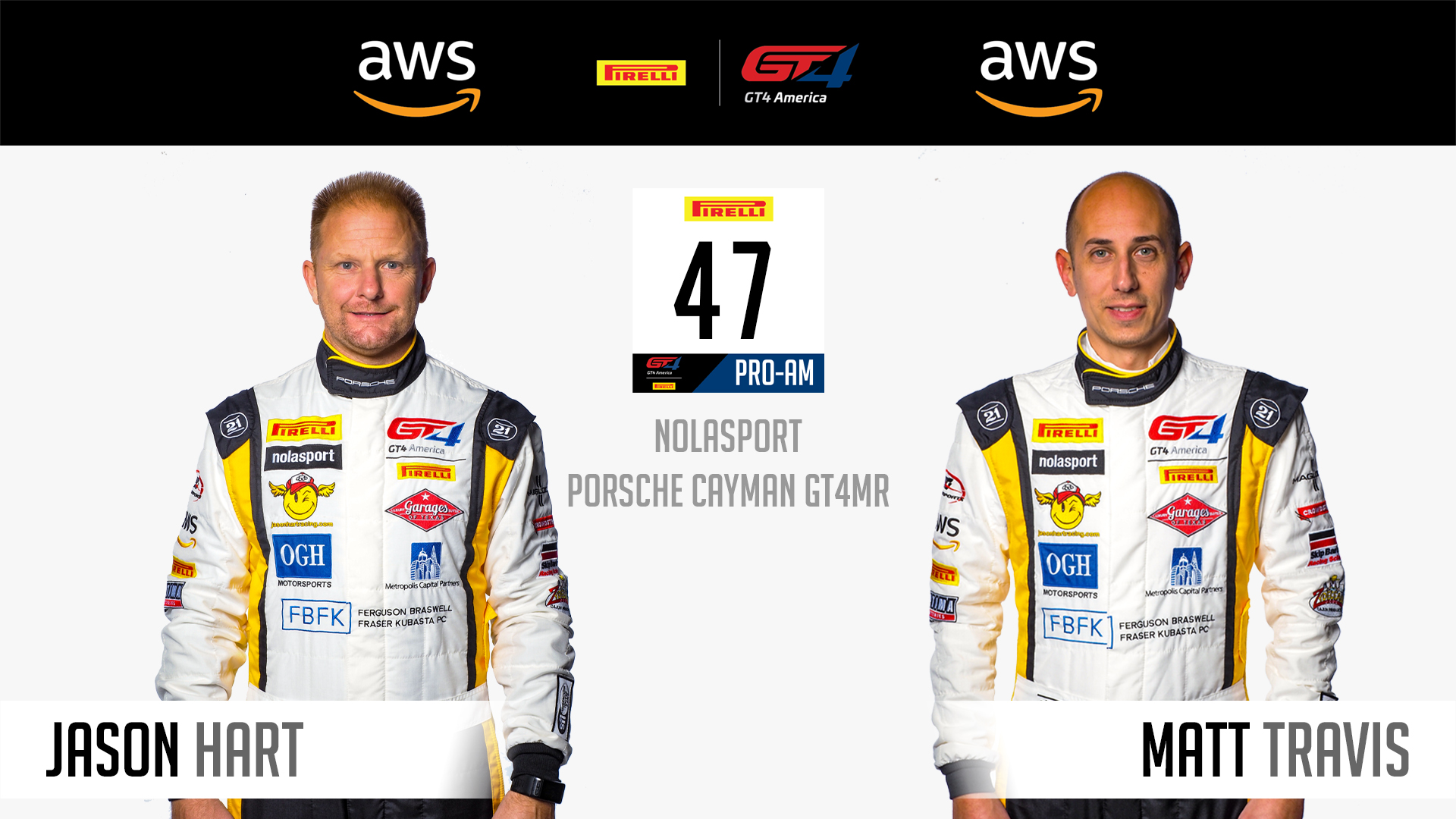 How was COTA?
Jason: COTA was an unexpected result, I really felt it would be tough for us to get on the overall podium given the strength of the field. As always NOLASPORT kept their heads down and we as a team focused on getting better every session. It all came together in the races and Matt and I with NOLASPORT and Porsche came home victorious, how can that not be an awesome weekend of racing!?

Matt: Absolutely surreal. We knew we would have strong competition this year, but some of our strongest competitors had random setbacks at COTA (bad pit stops, setup issues, etc.) that made our wins look WAY more comfortable than you’ll see for the rest of the season. It was special to win twice overall with so many friends and family at our “home” track on the calendar.

How did you get into racing?
Jason: I was introduced to racing with my father’s racing business Bud Hart Porsche Racing when I was young. When my parents divorced when I was 10, racing disappeared. It was in my blood and I ended up working on drag and oval race cars at about 13 and started drag racing once I got my license. Shortly after graduating high school I got a job at Bondurant while going to college and that was where I focused all my energy on becoming a pro driver. It was a long road, but one that makes me who I am today, and I am so thankful and blessed that it has become a reality.

Matt: I was in Formula SAE in college, which got me interested in racing, but I wasn’t the driver. Then life happened, work and family got busy, and it wasn’t until about ten years later I got back to playing with cars. I started doing DE events, got coaching from Jason, and ultimately raced for the first time when I was already in my 30s.

What is your favorite racing memory?
Jason: This is tough to answer…winning the BAJA 1000 in 2011, winning in many different formats – (Sprint Cars, Sports Cars, Off-Road, Dirt, Pavement), winning over half a dozen 24hr races including the very first one I did at the 2006 NASA 25hr, qualifying on pole, fastest race laps??? I think about the accomplishments and the biggest memories are the people. I have been so blessed to be involved with so many great folks who have become lifelong friends. There is a bond that develops between racers when you accomplish something together, the best is having the relationships that last long after a single moment.

Matt: Wow. Tough question! The ones I remember most aren’t the wins, but the hard-fought battles. So maybe it’s the last couple laps of last year’s season finale. We didn’t get the result we wanted, but I’ll always remember those couple laps. I’m proud of keeping it clean, and I’m glad we are back again this year trying to get one place better in the championship.

What’s the story behind your helmet design?
Jason: I have always liked the 50’s-60’s era so I tend to have custom hot rod and bike painters come up with a design inspired by this time. Flake, Leaf, Pin Stripes…I just like the way this look makes me feel.

Matt: There’s a smiley face that says “have a happy day” that reminds me of time spent with my grandparents when I was young. And a Strong Bad saying “everybody to the limit” because that’s hilarious. Everything else I left in Mike Savage’s capable hands.

Something interesting about you or a talent?
Jason: I would not call myself a natural. I read books, asked questions, studied video and data, rode with anyone who I felt I could learn from. Over time working hard at getting better/faster and then on to developing race craft I started to have success. Working at racing schools meant I was doing this all day every day, and this was my plan. I believe this is why I enjoy coaching so much today as well; I like to share and learn with people. When I was focusing on golf before I got my driver’s license a gentleman said, “if you want to be a pro golfer you need to be at the golf course”, so I just inserted racing. “If you want to be a pro driver, you need to be at the racetrack!”

Matt: Umm...I can juggle? I married my high school sweetheart? I play bass in a cover band? Sometimes we put a live cougar in the car so I can learn to drive with the fear? I don’t think I’m particularly interesting or talented.

If you could invite three people to dinner (living or dead) who would it be and why?
Jason: Georgette and Paul Marty, my mother’s parents. Unfortunately, I never met them…they were killed in a plane crash. Everyone I have ever met who knew them has such great admiration for them. There is something great about a person who people genuinely speak highly of in their absence. Although I never met them, I am proud of them and proud to be their grandson. The third person would likely be someone like Roger Penske. Another person who so many speak highly of and someone who is the most dedicated of racers. It would be great to spend time with, or even be mentored by a guy like Roger.

Matt: My favorite dinners are with my wife and two kids, laughing and singing songs and spending time together in a meaningful way. I wouldn’t trade those dinners to spend time with a celebrity, politician, or other famous person.

Jason, you grew up in a family that raced Porsche with your dad Bud Hart. What was it like growing up at the racetrack and following in your dad’s footsteps?
I feel blessed to say the least to be my father’s son. Being raised by a Marine had its pluses and minuses but looking back the balance of the two helped shape my life. Being around racing was such a unique environment to grow up in, I loved the shop and the track along with all the Porsches. Watching my dad build race cars, engines, transmissions has helped me so much in what I do today. I feel grateful to understand a car to its core. This has helped me immensely when working with a team to diagnose what a car is doing or what it needs to work better, have the endurance and ultimately go as fast as possible. When I am home, I spend time in my shop on our property and the memories of the time in my dad’s shop makes it a very special place for me.

(Jason) Do your daughters enjoy being at the racetrack with you and what’s your advice to them if they want to pursue a career in racing?
The girls certainly say they enjoy the racing and being at the racetrack, this brings smile to my face I could never hold back when I here them talk about it. As far as me wanting them to be racers I am sort of a shoulder shrug about that. Racing is my passion, if they take to it, I will certainly support them. If they want to do other things in life, I am happy to follow them and support them on their own journey.

Matt, you are good at crunching numbers given your profession as a leading tax specialist. Do you think your background has helped you more effectively analyze and understand racing data to get faster on the racetrack?
Being analytical has certainly helped my drive. As I’m sure Jason would attest, I have very little natural driving aptitude. And my reaction times are absolute trash. So, I’ve learned a lot about what the car does and why, through both data and coaching, with numbers and logic. I’ll never be pro fast, and that’s totally ok. My goal is to be the fastest guy who works a desk job for a living, and it’s neat that some of those daily job skills translate to the racing world too. 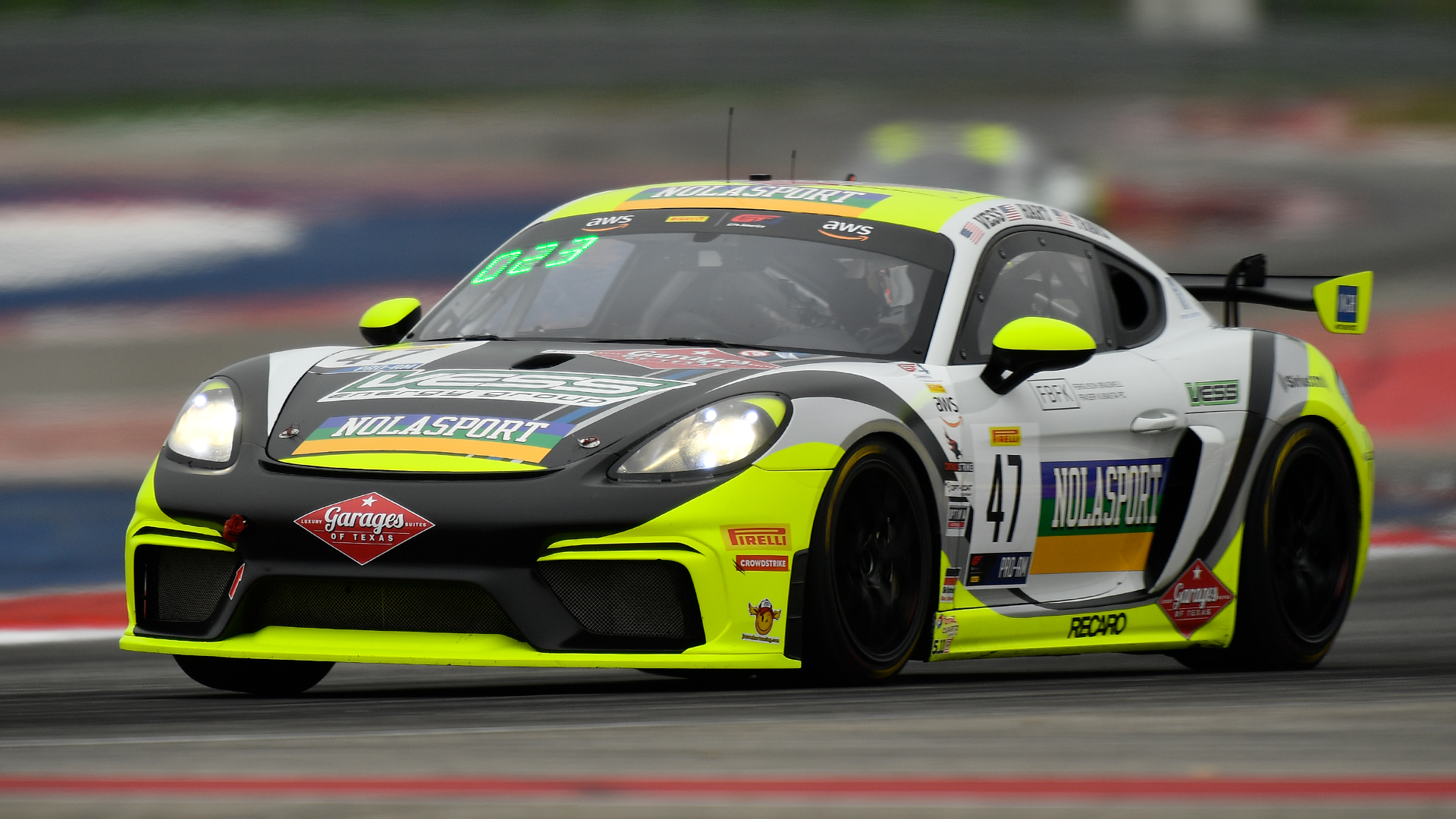