Sonoma, Calif. - The final Pirelli GT4 America Sprint race of the weekend took place under hot and sunny skies with Michael Cooper and the #10 Blackdog Speed Shop McLaren 570S GT4 leading the field to the green flag. Cooper would go flag to flag to take the win, his sixth victory in eight races on the 2020 season.

"I seem to be a step ahead here at Sonoma, not sure what it is about this track, but I love it! It's so hard to pass here, so getting out into the clean air early is key, I was able to do that in race 1 and then luckily start up front for the last two races. That was really the key to the weekend," said Cooper, who has now had five straight wins going back to rounds 4 and 5 at VIR.

With 47 minutes left on the clock Pumpelly would slip back past Andretti exiting the carousel and reclaim third position overall.  Pumpelly would immediately catch up to Staveley and begin to stalk the Mustang for the second.

With 40 minutes remaining the battle for second in the Am division would heat up as Michael Dinan would get into the side of Terry’s Aston Martin, spinning the Race 2 winner at turn 2.  Terry would fall to sixth in class while Dinan would face a drive through penalty for avoidable contact.

8 minutes later Terry would move past the #24 Ian Lacy Racing Ford Mustang of Frank Gannett for fifth in class and set sights on the #119 Stephen Cameron Racing BMW M4 GT4 of Sean Quinlan for fourth in Am. 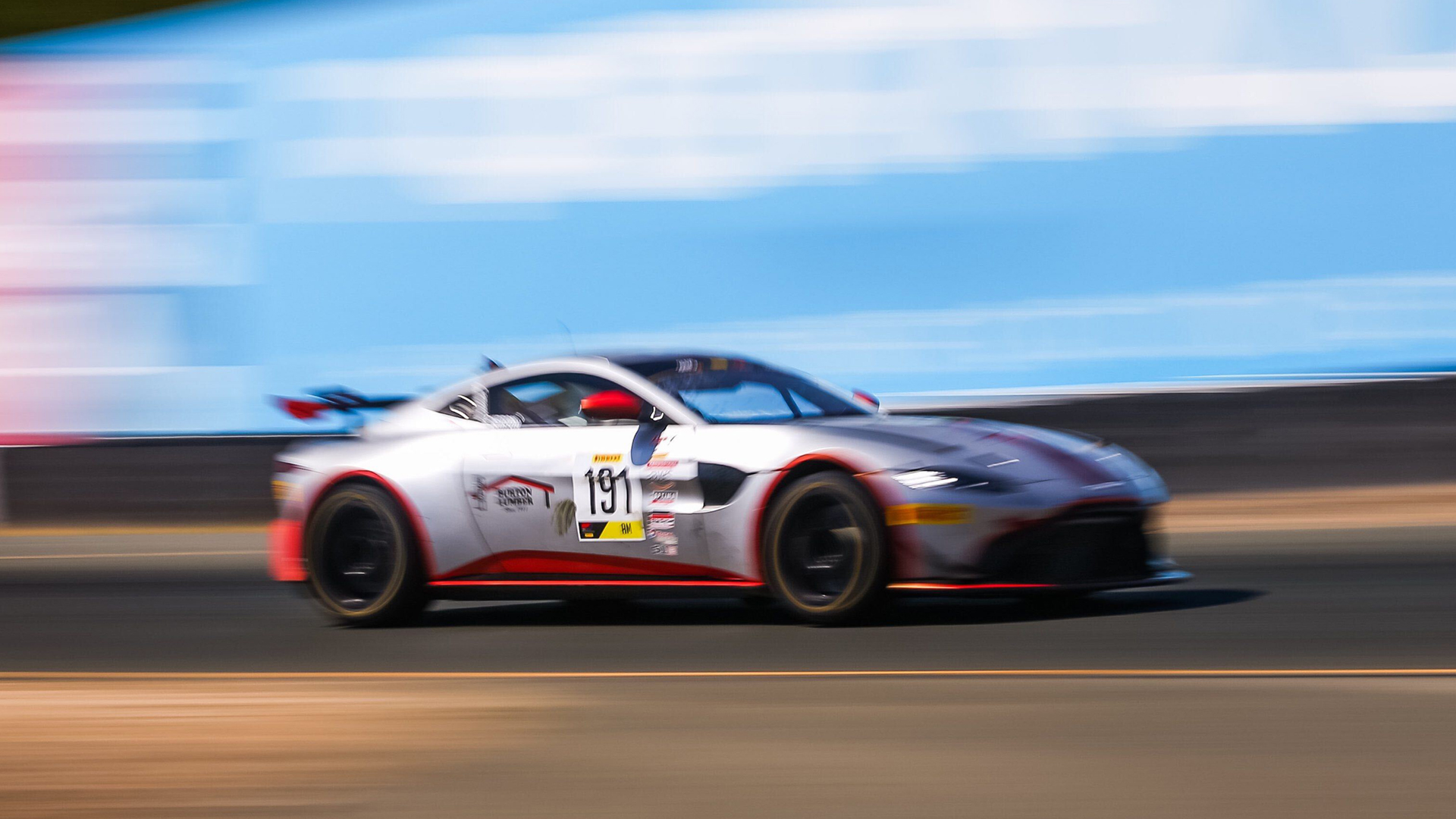 With 28 minutes on the clock, Pumpelly would take an outside line at turn 7 around Staveley and reclaim second position as the two Pro drivers exited the hairpin.  Pumpelly would gap Staveley as Cooper extended his lead to over 4 seconds.

One minute later, Terry would make an aggressive inside pass on Quinlan for fourth in Am at the turn 10 hairpin. Jason Bell’s #2 GMG Racing Porsche 718 Cayman GT4 would remain third in class, 7 seconds ahead of Terry.

As the clock ticked past the 13 minute mark, Terry reduced Bell’s lead to 2.1 seconds, as Bell caught up to second-place runner Mark Klenin.

Minutes later, Klenin would face a technical issue and dive into the pits, handing second place to Bell and third to Terry, who was now within 1.8 seconds of the #2 GMG machine.

Sean Quinlan would quietly sneak up to Terry and with only 5 minutes left on the clock, squeeze his BMW past the Aston Martin for third position in Am. At the same time Michael Dinan would get his car into fifth in class, now only 1.5 seconds behind Terry.

As the checkered flag flew Michael Cooper would take his third win of the weekend with Spencer Pumpelly coming home second and Drew Staveley third.

Jeff Burton would cruise to the Am class win with Jason Bell finishing second and Sean Quinlan third.

"Being up front is a huge advantage here, but the Rearden guys really have the car setup well so tire wear is not that bad, so thanks to those guys for giving me a great car!" said Burton.