Elkhart Lake, WI - Due to poor weather conditions during qualifying, the Race 2 grid was set by the fastest Practice Session 2 times, with Andrew Davis and the #2 GMG Porsche 718 Cayman GT4 bringing the field to the green flag. Bill Auberlen, race 1 winner, started second in the #82 BimmerWorld BMW M4 GT4 with Jan Heylen and the #37 RS1 Porsche Cayman CS MR third.

At the start Auberlen continued with his Race 1 speed and powered past Davis for the overall and Pro-Am class lead.  Kenton Koch in the #15 Bsport Racing Aston Martin Vantage GT4 would slip past Heylen for third overall and third in Pro-Am.

The Am leader, Kris Wilson and the #16 Rearden Racing Mercedes AMG GT4, would slot in sixth overall.

As Tan and Heylen battled, Tan would go wide at turn 12 and drop to ninth overall allowing Wilson, Heylen, Patrick Gallagher in the #33 RS1 Aston Martin Vantage GT4, and Ian James in the #50 Panoz Avezzano sneak through. 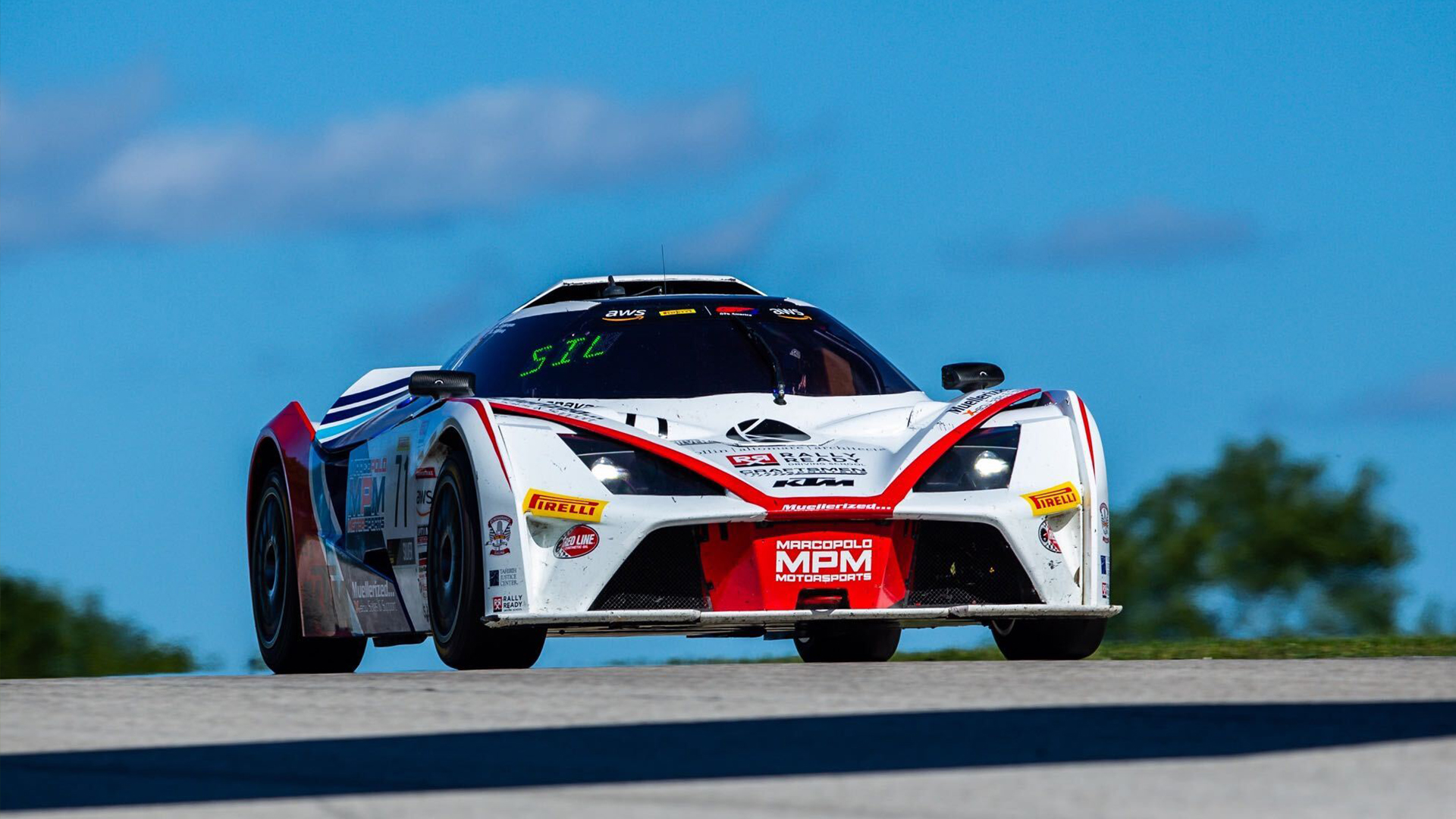 15 minutes into the 60 minute race, Auberlen would stretch the overall and Pro-Am lead to over 3 seconds with Wittmer controlling the Silver lead from fourth overall, and Wilson leading Am from seventh overall.

2 minutes later however, the hood of Wittmer’s BMW M4 GT4 would flip up into the windshield of the car, forcing the driver to pull over, fix the hood, then limp around to the pits. Andretti would inherit the lead in the Silver division with Nicolai Elghanayan in the #71 Marco Polo Motorsports KTM X-Bow GT4 second in class.

As the pit window opened for the required driver changes, Auberlen had stretched the overall and Pro-Am lead to over 8 seconds with Davis, Koch, Heylen, and Gallagher rounding out the top five.

At the same time Mads Siljehaug, now behind the wheel of the #71 Marco Polo Motorsports KTM X-Bow GT4, would catch the Silver-class leading Mullan as the two would battle for seventh overall and the class win.

With 15 minutes remaining Michael Dinan would get past Belluardo for third overall going on the inside of turn 3.

Dinan’s run would continue as two laps later he would slip past Putt in the Carousel for second overall and try to catch Walker Jr for the lead, who was 9.1 seconds ahead with 10 minutes remaining.

With under 3 minutes to go, the battle for the Silver lead remained hot as Siljehaug would move to the inside of Mullan coming out of the lef-hand turn 6, then stick to the outside line through the right-hand turn 7, overtaking the McLaren for first in the Silver class, third overall.

"I had to take advantage where the McLaren was weaker since it was so strong in a straight line. Happy for the win today!" said Siljehaug.

"It was really great. For a track like this and to get P1 in class, it really is amazing, a very exciting race!" said Elghanayan.

At the same time, Dinan caught the Overall and Pro-Am leader Walker Jr. Dinan would swing around the outside of the BMW at turn 1 and claim the lead with only 1 lap to go. Dinan would pull away and go on to take the win with Walker Jr in second and Putt third in class, fifth overall.

"Obviously you always want to get the win, like we did at Sonoma, so we did not want to turn down the opportunity to grab another! Robby [Foley] had a great stint and gave me a great car!" said Dinan.

"This is a great win! Michael [Dinan} did all the work though, I just wanted to give him a clean car and let his pace do the talking!" said Foley.

"I was holding on! My tires were going away, but I have to say that Kris Wilson did a great job today running up front.The Rearden crew gave us a great car today!" said Allen.

"John [Allen] did a great job holding off the NOLASPORT car. He had a great stint and I have to second what he said about the NOLASPORT crew, everyone has done an amazing job this weekend!" said Wilson.

The final Pirelli GT4 America SprintX race from Road America will go green on Sunday, August 30th at 10:30am CT. Stream it live at https://www.gt4-america.com/live.