Elkhart Lake, WI - Mads Siljehaug and the #71 Marco Polo Motorsports KTM X-Bow GT4 led the field to the green flag for Sunday’s Pirelli GT4 America SprintX weekend finale from Road America, but it was the Jarrett Andretti-driven Andretti Autosport Window World of Michigan #36 McLaren 570S GT4 that made the biggest splash, dicing through from fifth on the grid to second going into turn 1.

The #71 KTM machine never gave up the pressue from the McLaren and pulled away.  As the race went on the #71 would increase their lead and go on to take the victory in dominant fashion, finishing 8 seconds ahead of the rest of the field.

"The car is where it is now because of the hard work the team has put into the car and it's really starting to pay off!" said Siljehaug.

"To come here and get the overall victory is amazing. Mads [Siljehaug] did a fantastic job, so I just had to babysit the car today!" said Elghanayan.

On lap one as the field made it through turn 13, the first safety car was called as Race 2 Am-class winner John Allen and the #16 Rearden Racing Mercedes AMG GT4 were tagged by the #19 Stephen Cameron Racing BMW M4 GT4 of Sean Quinlan, sending the Roll Tide liveried-Mercedes into the outside wall.

The race went back to green with 51 minutes remaining with Siljehaug leading Overall and in Silver, Dinan and the #21 Flying Lizard Motorsports Aston Martin first in Pro-Am, third overall, with Sean Gibbons and the #7 NOLASPORT Porsche 718 Cayman GT4 leading in Am sitting eleventh overall.

As the clock ticked past the 42 minute mark, Michael Dinan pulled to the outside of Andretti at the Billy Mitchell Bend, the two would touch and unsettle both cars, allowing Matt Travis and the #47 NOLASPORT Porsche 718 Cayman GT4 to slip into second overall, first in Pro-Am, as Dinan and Andretti would run behind.  While these four would battle, Siljehaug would build a 9-second lead over his rivals.

On the next lap Andretti would pull over to the side of the road just before the Speedville Bridge and be forced to restart his car due to a mechanical issue and fall to fourteenth overall, fifth Silver.  This would hand Harry Gottsacker and the #28 ST Racing BMW M4 GT4 second in Silver, fourth overall, and give Cole Ciraulo and the #25 CCR Team TFB BMW M4 GT4 third in Silver, fifth overall. 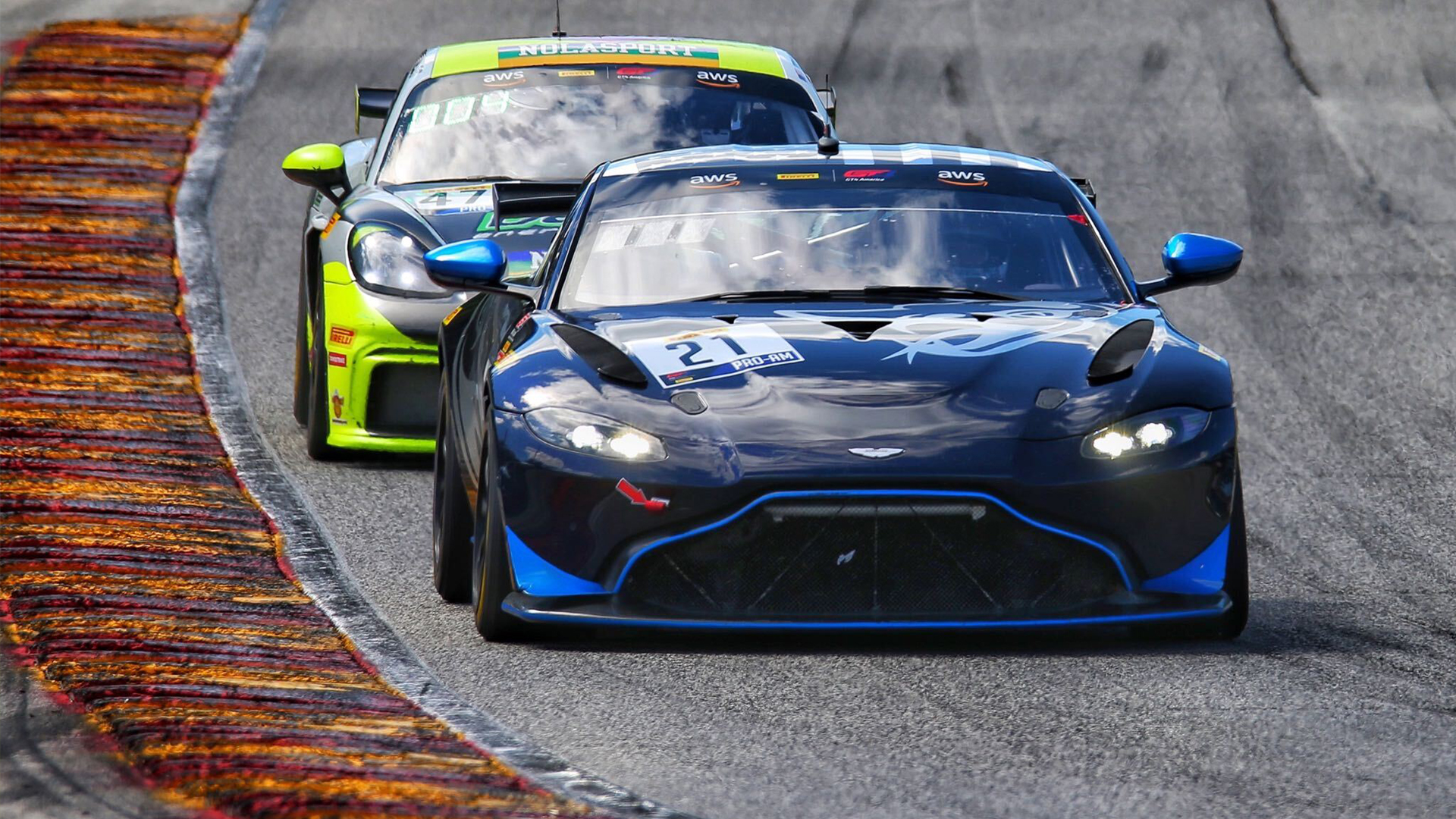 With 23 minutes on the clock, the Pro-Am battle for the fourth, fifth, and sixth positions raged on with three Aston Martin Vantage GT4s running nose to tail. Vesko Kozarov would sit fourth in the #91 from Rearden Racing, Kenton Koch in the #15 from BSport Racing machine would sit fifth, with Patrick Gallagher in the #33 RS1 car sixth.

Coming out of turn 13, Koch would dive into the inside of Kozarov at turn 14 and steal the fourth position in Pro-Am, seventh overall. While the three Aston Martins battled, Andrew Davis in the #2 GMG Porsche 718 Cayman would catch up to the pack.

With 19 minutes remaining, Gallagher would give a slight bump to Kozarov going into turn 5 and grab fifth position in Pro-Am. Davis would follow Gallagher through, dropping the #91 of Kozarov three positions in just two laps.

Up at the lead for the Pro-Am class, Robby Foley would catch up to Jason Hart, sticking to within one-tenth of a second with 16 minutes remaining.

With only 14 minutes left on the clock Koch would catch up to Bill Auberlen, now driving the #82 BimmerWorld BMW M4 GT4, and pass the American racing legend for third in the Pro-Am class on the outside of the Billy Mitchell Bend.

As the clock ticked below the 10 minute mark, Foley would get past Hart for the Pro-Am lead, second overall as further back Andrew Davis would get by Gallagher for fifth in class, eighth overall.

Both Davis and Gallagher would pass Auberlen for fourth and fifth in Pro-Am as the BimmerWorld driver seemed to struggle with his tires as the race came to a close. 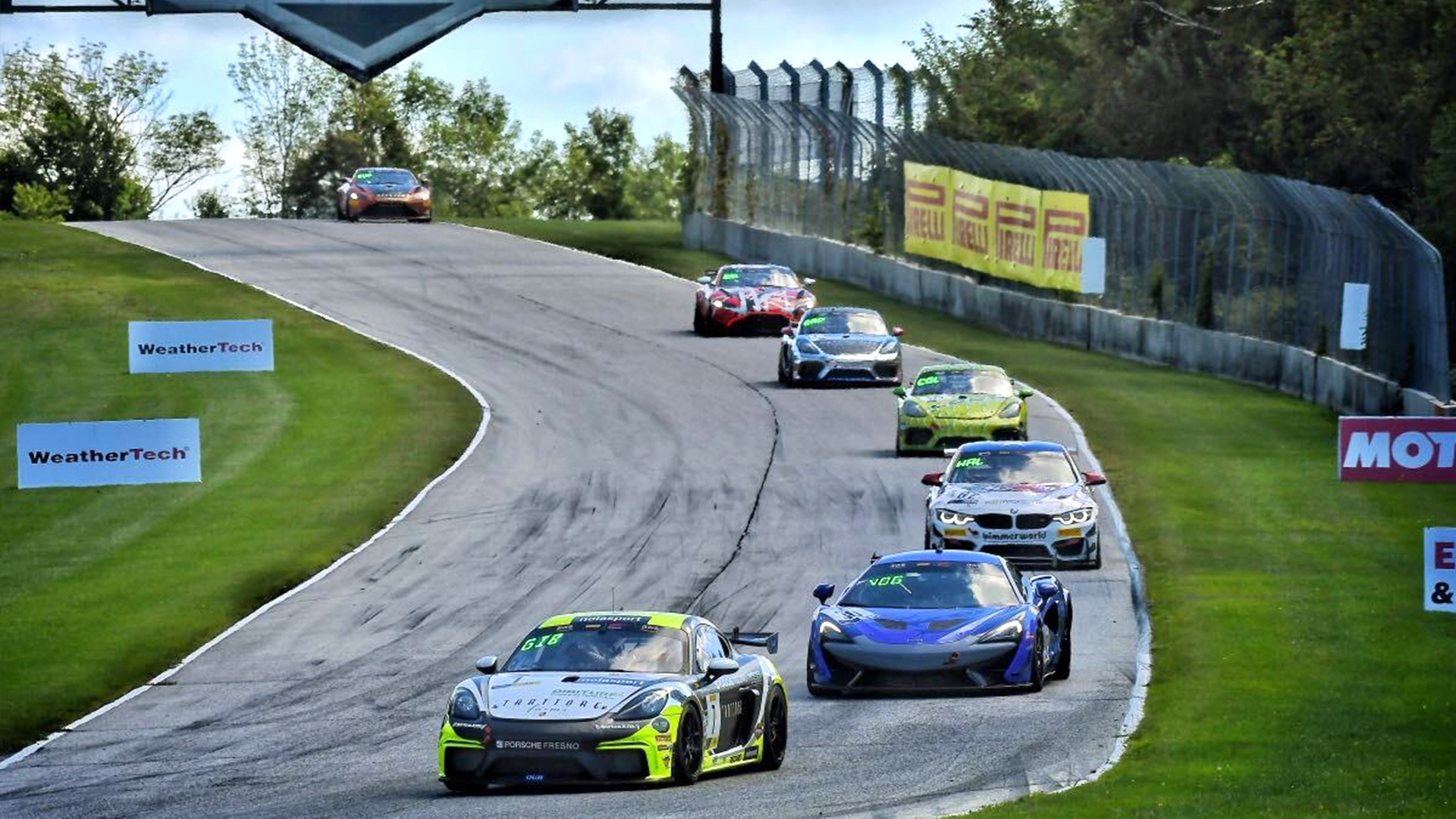 The Pro-Am win would go to Foley and the #21 Flying Lizard Aston Martin, their second straight, with Hart coming home second ahead of Koch.

"It was a great battle with NOLASPORT today, Jason [Hart] did a great job putting his car where he needed to, but luckily I was able to get him at 6, and get clean air to manage the gap. Michael [Dinan] did a great job before he gave me the car and it was great to watch!" said Foley.

"To get two wins here keeps us in the fight for the championship and it's a great feeling!" said Dinan.

"It was a fun, clean battle today! It was a little risky going against a car not in our class, but it sure was fun!" said Anderson.

"This season has been a challenge but the team has really rallied and gotten us to where we are now. We can't wait for COTA our home track!" said Gibbons.

Results are provisional until posted Final. Pirelli GT4 America SprintX teams will return to action September 17th-20th with a return trip to Circuit of the Americas in Austin, Texas. Tune in to every session at https://www.gt4-america.com/live.