Austin, TX - Michael Cooper capped a Pirelli GT4 America Sprint Championship clinching weekend at Circuit of the Americas with another victory Sunday morning, his 11th on the 2020 season. Drew Staveley finished second, while Am division winner Michael Dinan finished third overall and unofficially clinched the Am division Driver's Championship. Paul Terry finished fourth overall and second in Am, while Cooper's teammate Tony Gaples finished fifth overall and third in Am.

Cooper, in the #10 Blackdog Speed Shop McLaren 570s GT4 from pole led the field to green to start the 50-minute contest. Dinan, in the #210 Flying Lizard Motorsports Aston Martin Vantage GT4 started from back of the field, a family commitment kept him out of Saturday's race, and without a completed lap time from the day before was pushed to the back of the grid.

Jeff Burton, in the #191 Rearden Racing Aston Martin Vantage GT4 led the Am field through turn 1, while Dinan moved up two spots immediately.

As they did on Saturday, Cooper and Drew Staveley, in the #12 Ian Lacy Racing Ford Mustang GT4 began a multi-lap 50-minute intense battle with the driver of the #12 machine constantly looking for a way by and the pilot of the #10 machine not succumbing to the pressure. Burton slotted into third overall and first in Am.

By lap 5, Terry, in the #59 Rearden Racing Aston Martin Vantage GT4 continued his constant pressure on Burton and made a late braking maneuver through turn 20 and powered into the lead down the front straight. Dinan continued his march and had moved up into sixth and fourth in Am. A four-car battle emerged with Terry leading, Burton in second, Gaples, in the #11 Blackdog Speed Shop McLaren 570s GT in the third and Dinan in fourth. Dinan, then began to look for a way around Gaples and succeeded through turn 20 at the end of lap 5. 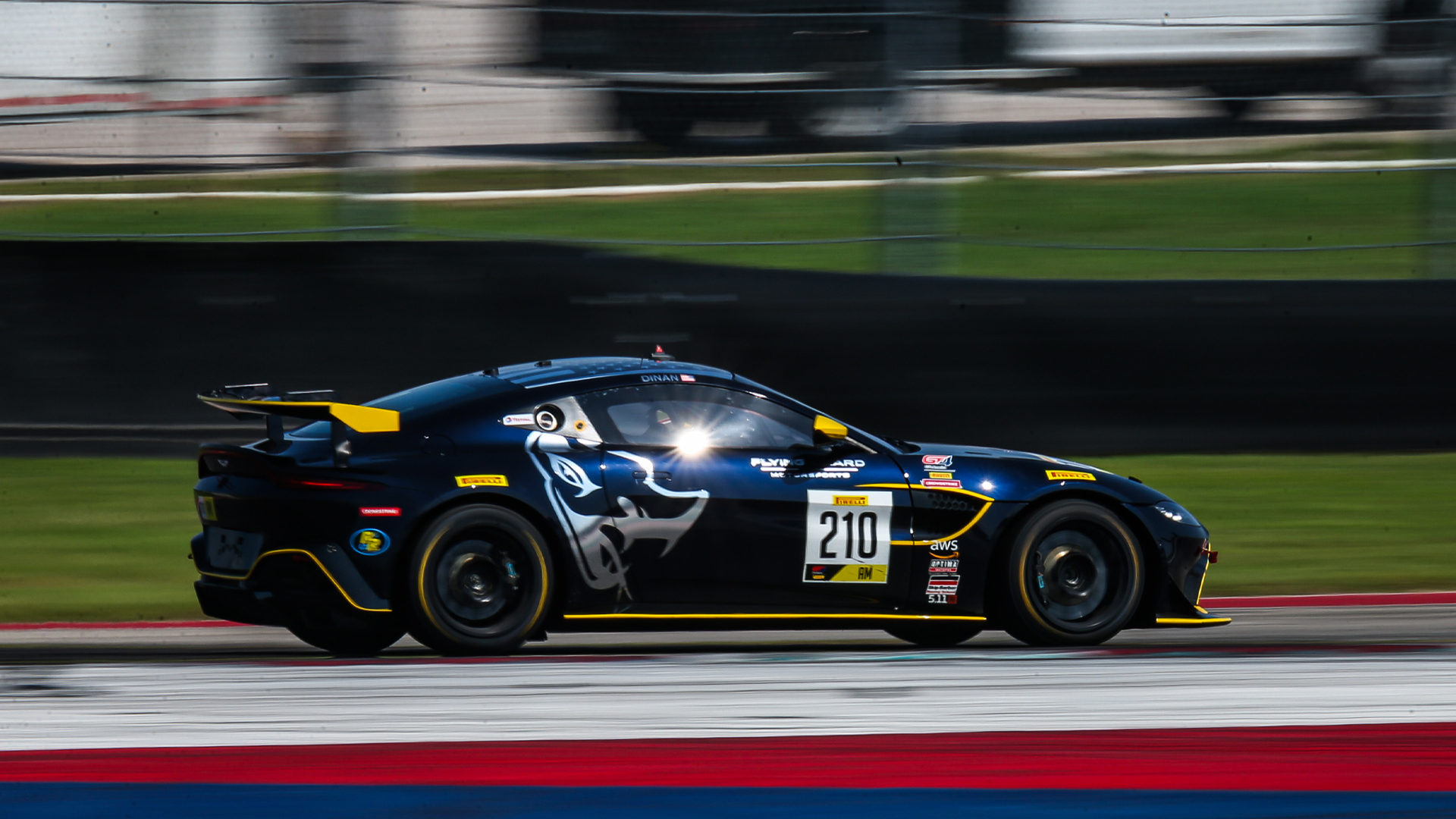 On lap 8, Burton spun through turn 19 dropping him back to sixth, allowing Dinan to move up into second. Behind the leaders, Jason Bell in the #2 GMG Racing Porsche 718 Cayman GT4, and Sean Quinlan, in the #119 Stephen Cameron Racing BMW M4 GT4 contacted. While Quinlan attempted to limp his wounded machine back to the pits, Dinan began pressuring Terry and eventually passed him for the lead. A full-course yellow then resulted as Quinlan's machine sat dead sticked on the track.

Cooper continued his masterful defending against a hard charging Staveley and withstood the pressure to cross the line .609 seconds ahead at the checkered. Dinan crossed third overall and 12 seconds up on Terry.

"We came into the weekend and maximized the points and scored three wins," said Cooper. "This Blackdog Speedshop team just operates at such a high level. I think for the team this is their fifth series driver's championship and third manufacturer's championship."

"It's definitely something I'm proud of and I'm super happy, it's another step along the way. Last year was a big learning experience. It's another step to my ultimate goal in racing and I'm really happy to have the championship clinched," said Dinan.