Indianapolis, Ind. - The final Pirelli GT4 America SprintX race of the 2020 season got underway under the early-morning sun with Patrick Gallagher’s #33 NOTLAD Racing by RS1 bringing the field to the green flag.

With 12 minutes off the clock, the #26 Classic BMW M4 GT4 of Toby Grahovec and #69 BGB Motorsports Porsche 718 Cayman of John Tecce collided at turn 3, sending both cars into the sand trap and bringing out the first safety car of the day. Gallagher remained in the overall and Pro-Am lead, De Angelis continued to lead in Silver, with the #46 NOLASPORT Porsche 718 Cayman GT4 of Russell Walker, Race 1 winner, leading in Am, sitting tenth overall.

The race went back to green with 38 minutes remaining in the race, just before the pit window for required driver changes opened.

As the field approached Turn 1 with 35 minutes remaining, Jan Heylen and the #37 RS1 Porsche Cayman CS MR, Thursday’s overall winner, dove to the inside of Robby Foley and grabbed third position overall and in class. At the end of the lap teams began to hit pit lane.

As the pit window closed the #33 NOTLAD Racing by RS1 Aston Martin Vantage GT4, now with Joe Dalton driving, continued to lead overall and in Pro-Am, Jarrett Andretti, now behind the wheel of the #36 continued to lead in Silver, with David Walker, now driving the #46 NOLASPORT entry, still leading in Am.

With 22 minutes remaining, the leading #33 machine of Joe Dalton had a bobble at Turn 2, allowing Michael Dinan in the #21 Flying Lizard Motorsports entry to slip through to grab the overall and Pro-Am lead. Bryan Putt in the #15 Bsport Racing Aston Martin Vantage GT4, would also get past Dalton for third overall and in class.

‘The World’s Fastest Accountant’, Matt Travis, was now behind the wheel of the #47 NOLASPORT Porsche 718 Cayman GT4 and quickly moved past the NOTLAD Racing by RS1 and Bsport Racing Aston Martins to get into second position overall and in Pro-Am, meaning the championship contenders sat 1-2 with only 2.8 seconds between them and 18 minutes remaining.

Jarrett Andretti would continue to lead in Silver and work his way through the slower traffic, extending his lead over the #28 ST Racing BMW, now with Nick Wittmer driving, to just under 4 seconds. 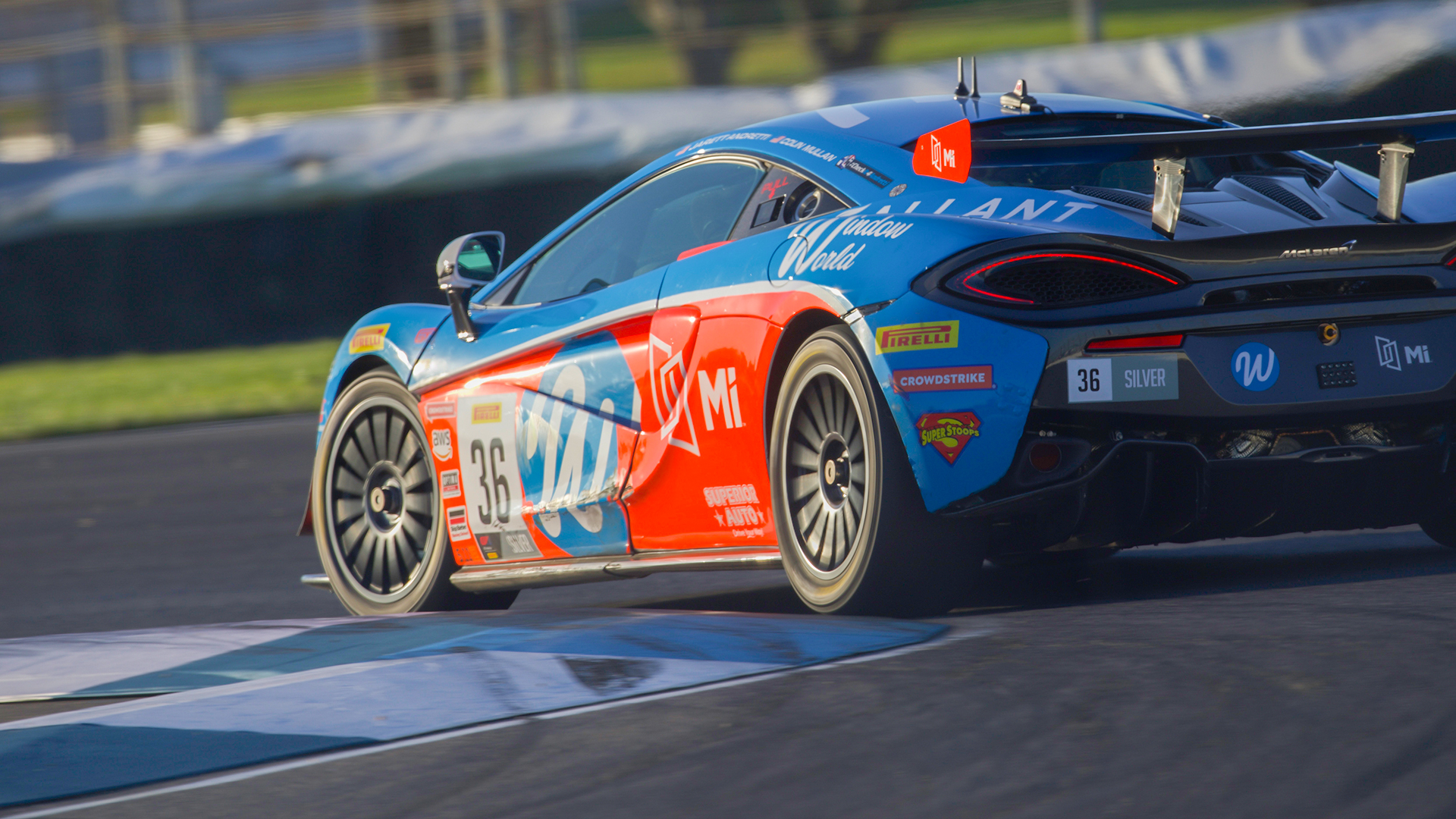 As the clock ticked under 7 minutes, Dinan slightly increased his overall and Pro-Am lead to 3.8 seconds, but Travis would not give up, making a late race charge. Silver leader Andretti kept his Silver-class lead, but Wittmer would close to within 2.4 seconds.

As the checkered flag flew, Michael Dinan and the #21 Flying Lizard Motorsports Aston Martin Vantage GT4 took the overall and Pro-Am win, also taking the championship over Matt Travis and the #47 NOLASPORT Porsche 718 Cayman GT4, who finished second overall and in class.

“We knew it was all going to come down to today, so I just tried to put in clean laps! There’s no better way to win the championship then coming down to the last race. I’m so happy to do this with Robby today!” said Dinan.

“I don’t know how to put this into words. Putting my dad’s scheme on the car and his name over the door, it just means a lot to me and the guys. I’m so happy right now.” said Andretti.

“This team has been through so much this year and it’s so special, it’s just incredible. I’m so happy to bring home the championship for everyone.” said Mullan.

David Walker and the #46 NOLASPORT Porsche 718 Cayman GT4 would win in Am, their second straight of the weekend.

“You know it’s just a beautiful day in the neighborhood today, I couldn’t be more proud of Russell and the team today!” said David Walker.

“It’s a great feeling to win again with my Dad. A huge thanks to NOLASPORT for giving us a great car this weekend!” said Russell Walker.