Raleigh, NC - Operation Motorsport focuses on those military veterans who do not get a chance to complete their service -due to service-related illnesses injuries or wounds. These servicemen and women, sometimes quite suddenly, have their career plans and aspirations taken away. They are removed from their team, no longer fulfill their purpose within the service, and ultimately lose that cherished identity.

Motorsport Immersion, when used as a diversionary therapy, has the ability to provide transitioning service members with a renewed sense of team, identity, and purpose. Through mutually beneficial partnerships in the motorsports industry with organizations like SRO Motorsports America, and teams like CrowdStrike Racing, DXDT Racing and Boehm Racing we bridge the separation and provide a new sense of identity.

Beneficiaries find Operation Motorsport through veterans’ advocacy agencies like the USO and the Air Force Wounded Warrior program, Soldier Recovery Units, through fellow veterans, or by chance through social media.

2020 began with a great sense of optimism for Operation Motorsport, a shared desire to grow the relationship with SRO and expand team partnership with CrowdStrike Racing. With plans, agreements and handshakes in place, beneficiary recruiting for season-long team placements were made. Fast forward to February for the season launch at Circuit of The America’s, Army Staff Sgt. Chad Failing (Ret.) joined CrowdStrike Racing’s Kevin Boehm / Boehm Racing Honda TCA entry. Chad was joined by OpMo staff who were there to support Chad and the team and assess new team partnerships for the growing list of beneficiaries in waiting.

After winning four SCCA National Championships, Boehm Racing was ready to make the jump from club to pro racing, debuting in SRO America for the 2020 season. Boehm Racing consisted of driver/engineer Kevin Boehm, his business partner and wife, Sharon, and a turn-key Honda Racing/HPD Civic Si race car. On race weekends, Kevin’s father, Herbert, also volunteered his time to help with the prep and maintenance of the race car.

The Honda Civic SI based team was partnered with AWS/CrowdStrike Racing and received logistical support from DXDT Racing--a major help, since both Kevin and Sharon work full-time jobs and only have a limited amount of vacation time to use for racing events.

Between and during races, Kevin handled the care, maintenance, and set-up of the car, as well as data analysis and planning. During the events, Kevin and his father worked on the car. In club racing, it was feasible for Kevin to be the driver, engineer, and lead mechanic on his race car. However, the team quickly learned that in pro racing, Kevin’s role was unusual. On most pro racing teams, the driver, engineer, and lead mechanic were separate people--which posed a problem, since all were often expected to be at different places at the same time during the SRO events! With this need in mind, Operation Motorsport stepped in to provide dedicated mechanical and logistical support to Boehm Racing at the majority of the 2020 races, freeing Kevin up to better handle the conflicting demands on his time.

And then COVID happened, and along with the rest of the world, our sunny outlook was replaced with a black cloud. We paused, reflected, and quickly realized the greatest risk likely facing our beneficiaries was their mental health. In many cases they were isolated, and what was important was continuing to engage them even if only virtually, and so an iRacing League and Friday afternoon Zoom Happy Hours were born. 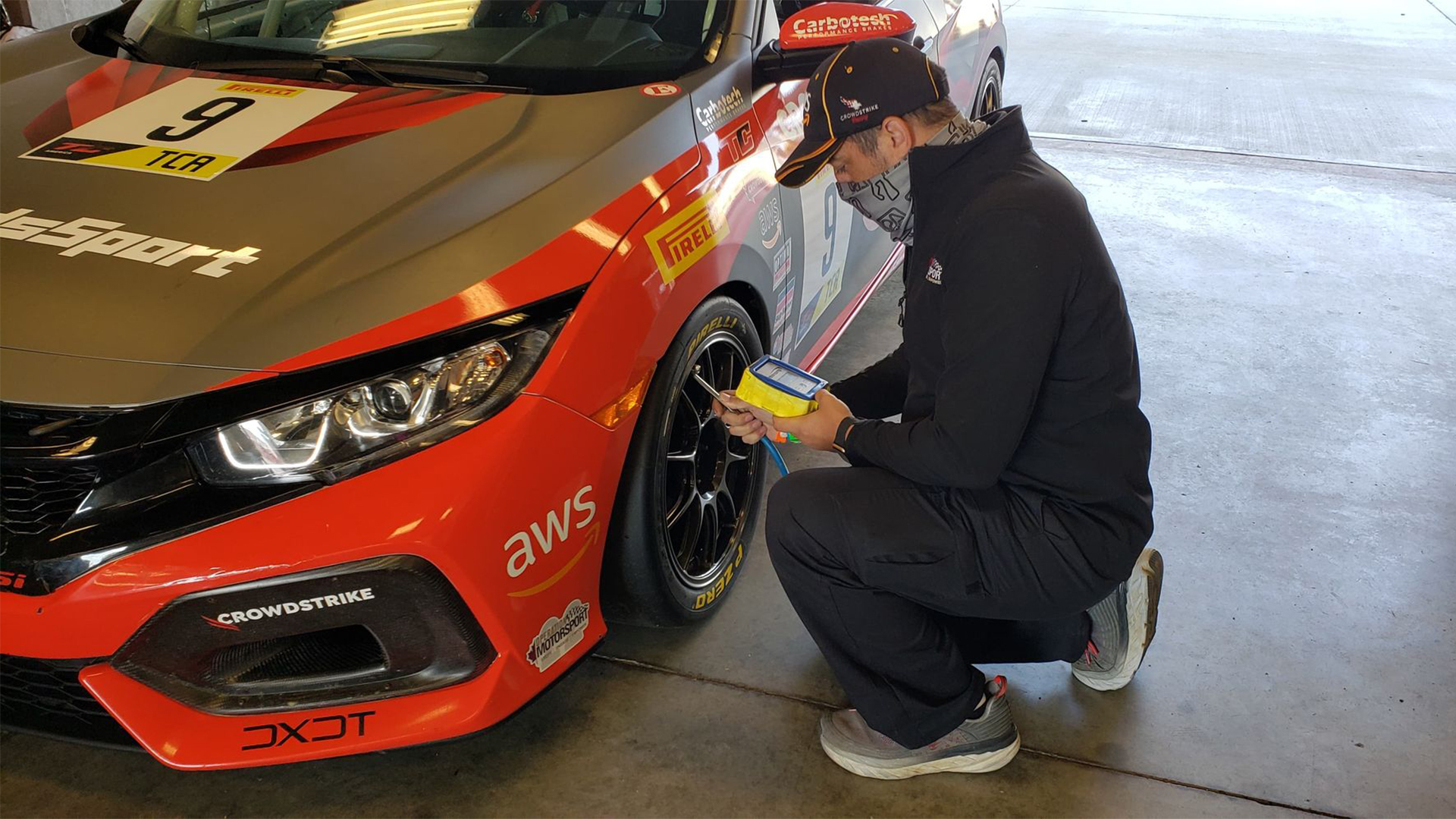 Once live racing resumed, Operation Motorsport faced new challenges in activating beneficiaries. These challenges were not expected and required extra planning and creativity. DOD staff had strict travel restrictions which prevented transitioning service members from becoming beneficiaries. Racing series implemented strict guidelines on team size, individual movement within the paddock and screening processes, eliminating the possibility of having an OpMo Event Coordinator on site. This is where the new team partner relationship with Boehm Racing came into play. Due to the pandemic restrictions, Boehm Racing was permitted only six team members at the race team, but since the team only needed three spots, the three extra positions were quickly made available to Operation Motorsport. Out of adversary, a creative solution was born to provide motorsports immersion opportunities for our beneficiaries during an otherwise difficult time.

The Foundation provided SSG (Retired) Chad Failing and SSG (Retired) William Babineau, both former U.S. Army Soldiers who joined Operation Motorsport while medically releasing from the military. Working as beneficiaries together and separately in multiple races, they assisted Boehm Racing with paddock set-up/tear down, wheel and tire prep, general car maintenance/prep, pit lane support, and anything else the team needed throughout the season. Working together, Boehm Racing provided Chad and Will with Purpose, Identity, and a Team bond that will last for years. In return, these two beneficiaries demonstrated their value and ability to take skills learned in the military and apply them in the motorsports world.

Operation Motorsport Board Member and Event Coordinator, Lynn Friedman, witnessed this partnership firsthand across multiple races and said “While Operation Motorsport provided the opportunity for Will and Chad to engage in the motorsport community, it gave the motorsport community many with non-military backgrounds an opportunity to engage with our veterans firsthand, and understand many of the challenges they face. It was a win-win year for all of us”.

After a challenging start to the season, Kevin achieved multiple podium finishes in the latter half of the year, culminating with winning the 2020 TCA Championship, the TCA Rookie of the Year Award, and the TCA Team Championship. Boehm Racing openly stated that much of the team’s success was directly and indirectly attributed to the support Operation Motorsport provided.

“We are proud to partner with the Operation Motorsport program,” Boehm said. “I would be hard-pressed to find a group that is more worthy of our support. They have given so much for us, and we salute their sacrifice as we do what we can for them. It’s been a joy to work first-hand with Operation Motorsport and its group of service members, each of whom has been a tremendous help on our CrowdStrike Racing/AWS Civic Si this year.”

Bob Page, President of the Page Group; Representing CrowdStrike and AWS: Official Sponsors of SRO World GT said,  “At CrowdStrike Racing, CrowdStrike and AWS we see the value of our returning veterans, and find many veterans employed in within our companies on both the staff and executive levels of the organizations.   Our support for Veteran’s causes runs deep, individually by staff, and exec’s, as well as within the corporate structure of these amazing companies.   We actively support the tremendous benefits that Operation Motorsports brings to our organization and will remain active supporters of this cause for years to come.  For 2021, depending on Covid Protocol’s, and related, we hope to expand our support for Operation Motorsports throughout the paddock, and more.   We thank Operation Motorsports contributions to our team in 2019, and 2020, and look forward to their support for years to come.   Every team in the paddock should be working with this amazing organization, and give these returning vets an opportunity to show vets significant abilities to contribute to a TEAM, and the contributions they can make with a little guidance and growth.”

Thank you to SRO Motorsports America, CrowdStrike, AWS, CrowdStrike Racing, DXDT Racing, Boehm Racing, the series staff, the crews, drivers, support staff and personalities, from all of us at Operation Motorsport. We couldn’t make this happen without each and every one of you. 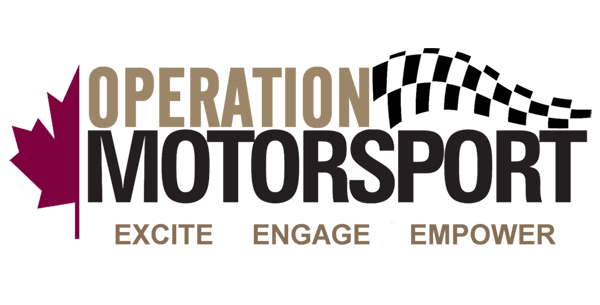