Sonoma, Calif - The #47 NOLASPORT crew of Jason Hart and Matt Travis found themselves in the Winner's Circle once again for the second round of Pirelli GT4 America competition to kick-off the 2021 season. After sweeping both qualifying sessions and claiming both overall wins, it was a magical weekend for the Pro-Am duo. “What a weekend! I can’t believe it, the magic is happening!” said Matt Travis on the Round 1 and 2 sweeps.

32 cars took the Pirelli GT4 America Race 2 start with the entire field through cleanly on the opening lap ofr the 60 minute contest. Race 1 winner Jason Hart and the #47 NOLASPORT Porsche started from pole and kept the lead with Jeff Westphal and the #888 Rearden Racing Audi R8 LMS and Patrick Gallagher in the #00 Notlad Racing by RS1 Aston Martin Vantage GT4 settling for second and third overall and in the Pro-Am class.

Kenton Koch in the #15 BSport Racing Aston Martin and Andy Lee in the #8 GMG Racing Audi would get the jump on the #59 and #062 entries and claim fourth and fifth positions overall by the end of lap one.

10 minutes into the race Koch would move to the inside of Gallagher and take over the third overall position at turn 7 and start to chase down the #888 Audi for second. Koch’s attack would pay off two laps later as the #15 would snag second position from Westphal and quickly close on Hart for the lead.

Back in the Silver division, Ryan Dexter and the #062 Dexter Racing Aston Martin would lead as Christian Szymczak and the #72 Murillo Racing Mercedes-AMG GT4 would battle Mads Siljehaug and the #71 Marco Polo Motorsports KTM X-Bow Evo GT4 for second position in class, ninth overall.

After starting 8th overall, Spencer Pumpelly and the #66 LaSalle Solutions TRG Porsche 718 Cayman GT4 would quietly move into the top 6, getting past Brandon Davis’ #59 WR Racing Aston Martin at the final hairpin with 42 minutes left on the clock. Pumpelly would continue his charge and sweep past Lee’s Audi at turn 5 for fifth overall with Davis also getting past the GMG Audi two turns later.

Seven minutes later Pumpelly would track down the Gallagher-driven #00, passing the Aston Martin at Turn 9 for fourth overall and in the Pro-Am division.

After the pit window closed for the required driver changes at the halfway point of the race, The #47 NOLASPORT Porsche, now with Matt Travis driving, would remain in the overall and Pro-Am lead, the #71 KTM with Nicolai Elghanayan would take over control of the Silver class sitting sixth overall, with the #16 Capstone Motorsports Mercedes-AMG GT4 of John Allen leading in Am, ninth overall. 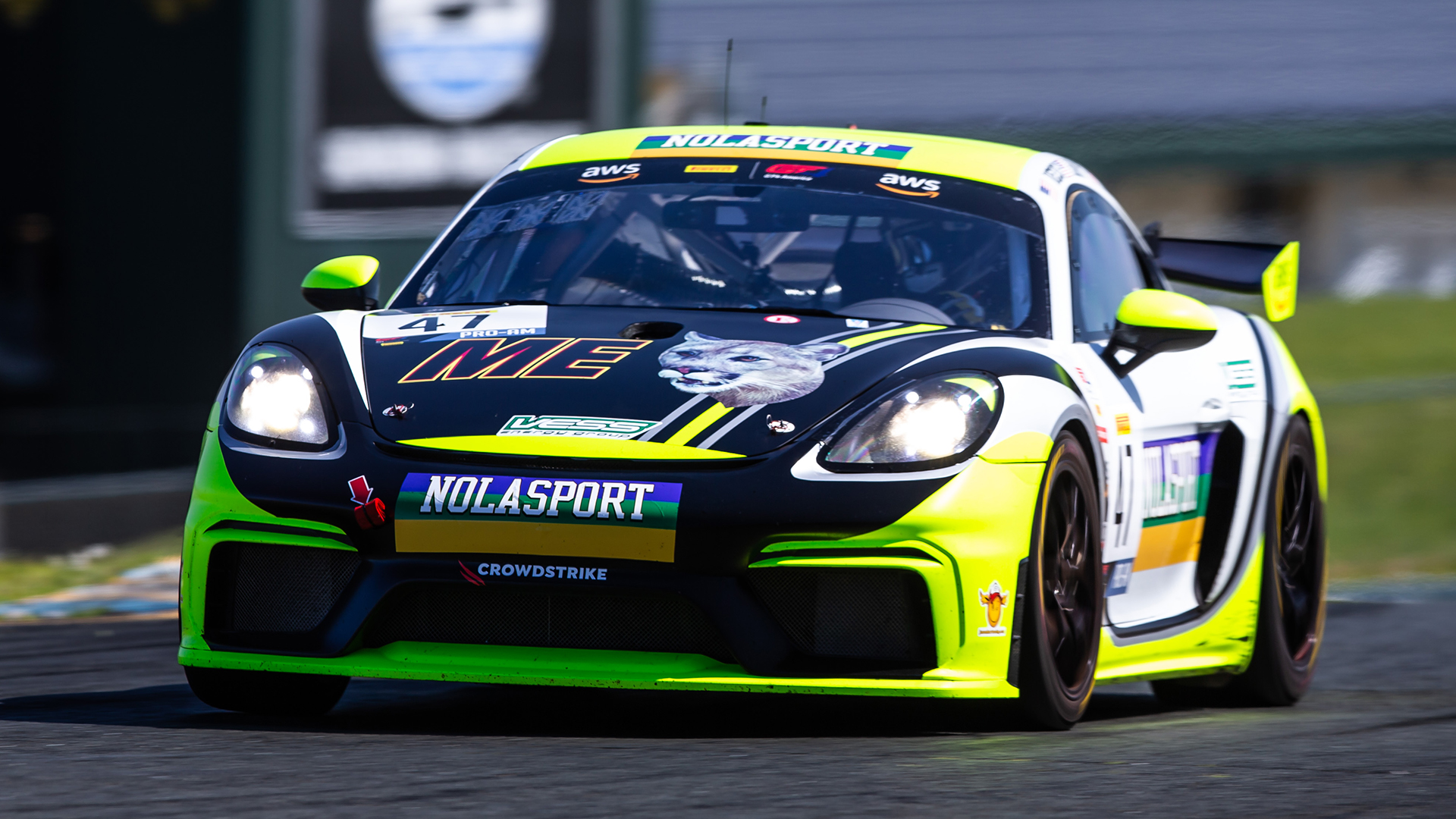 With 23 minutes remaining, Derek DeBoer and the #66 LaSalle Solutions TRG Porsche get around the #888 Rearden Racing Audi of Kris McCoy for second overall. Paul Terry in the #59 Aston Martin would then get past McCoy a few minutes later for third overall and in Pro-Am.

The Silver class lead battle would then see Kenny Murillo, now piloting the #72 Murillo Racing Mercedes-AMG, close on leader Elghanayan and battle nose to tail for fourth overall. Murillo would move past the KTM for the Silver-class lead as the two battled through turn 1 with 14 minutes remaining.

Minutes later Paul Terry’s #59 Aston Martin would take advantage of a mistake by Deboer’s Porsche and nab the second position in Pro-Am. At the same time flying Kenny Murillo would get past both DeBoer and Terry for second overall, sitting comfortably in the Silver class lead.

Ryan Dexter and the #062 Aston Martin, Race 1 Silver winners, would move past Elghanayan for second in the Silver class and DeBoer’s Porsche for fourth overall.

Deeper in the Pro-Am field, Black Swan Racing would move up into the sixth position, ninth overall, gaining a whopping 23 positions from the start of the race with Porsche Ace Jeroen Bleekemolen and Tim Pappas driving.

With 8 minutes remaining, Pappas would move up even higher, slipping past both the #888 and #15 for fourth in Pro-Am, seventh overall, where the car would ultimately finish.

On the white flag lap, the Am battle would heat up as John Geesbreght’s #68 Smooge Racing Toyota GR Supra GT4 would get around the #16 Capstone Motorsports Mercedes-AMG to take possession of the class lead.

The Silver class would see the #72 Murillo Racing Mercedes-AMG of Kenny Murillo and Christian Szymczak win with the #062 Dexter Racing Aston Martin and #71 Marco Polo Motorsports KTM taking second and third. The #22 CCR Racing/Team TFB BMW and #38 ST Racing BMW would round out the top five.

The Am win would go to the #68 Smooge Racing Toyota in only the team's second race, followed by the #16 Capstone Motorsports Mercedes-AMG and #46 NOLASPORT Porsche 718 Cayman GT4. The #43 Murillo Racing Porsche of Aurora Straus and Christina Neilsen would claim fourth in class with the #23 Motorsports USA McLaren fifth.

Pirelli GT4 America competitors return to action April 30th-May 2nd at Circuit of the Americas in Austin, Texas for Rounds 3 and 4 of the 2021 season.