Pumpelly Wins Exciting Round at Streets of Long Beach

TRG The Racers Group's Spencer Pumpelly went flag-to-flag at the Streets of Long Beach Presented by AWS to win Round 3 of the Pirelli GT4 America competition. The #66 Porsche 718 Cayman CS MR driver took the top spot in a record-setting qualifying lap and never looked back from the drop of the green flag, finishing 0.687-seconds ahead of the second place.

"We had a pretty good car right off the bat," Pumpelly remarked. "But I had a great car setup from TRG so I just kept making sure I hit my marks while seeing where Ian (James) was. I couldn't do anything to get over the sinking feeling that (his) car was growing in my mirrors and sure enough, in those last laps, he got really close and I had to turn it back up to hang on. This is a really cool first win of the season for myself and the team."

Team Panoz pro Ian James put on a late charge for the win, closing the gap down from as much as 1.5 seconds but didn't have enough to capture the win from Pumpelly, finishing in his original starting position of second place in the #50 Panoz Avezzano GT4. "We had a pretty good start; there was a little bit of defense, but we're always on the attack toward the end of the race," James explained. "At the beginning I was focusing on the McLaren and I thought that if he got ahead of me that I would have to attack to get that back but I managed to stay with Spencer and it ended up with a second place finish."

Veteran Michael Cooper maximized the race start and drove from P7 into third before the end of the second lap, managing to hold off a charging Matt Keegan to take the last step on the podium. This was a first this season for the Blackdog Speedshop Team with Cooper taking his new #10 McLaren 570S GT4 to a podium appearance. "I started in seventh and managed to get past a few cars into fourth, and then I passed Matt (Keegan) and got into third, but I couldn't catch up to Spencer and Ian," said Cooper. "Early on I was able to hang with them a little bit, but after the cautions I just got left in the dust so I basically ran my own race and just watched my mirrors from there." 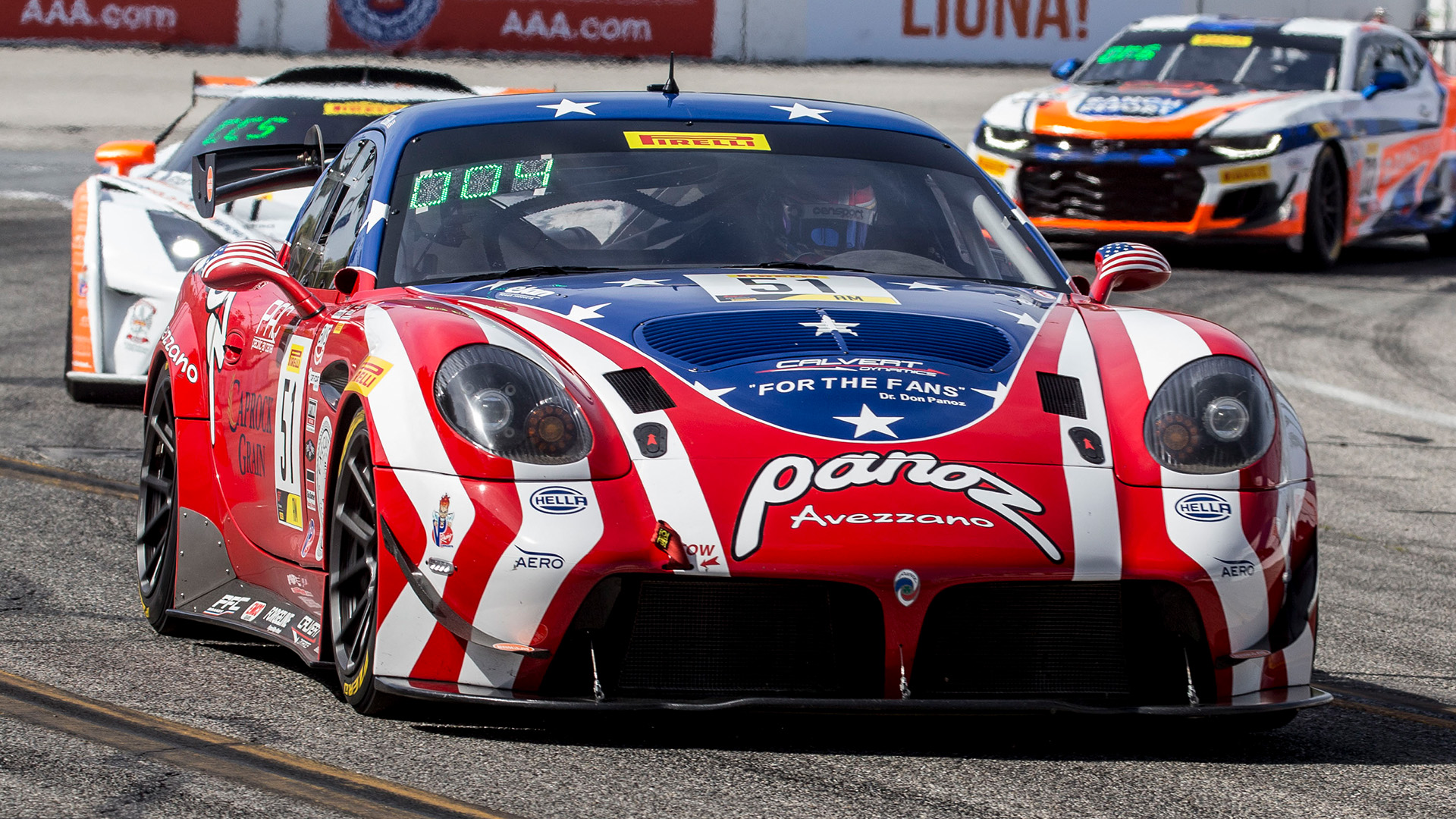 On the Amateur podium, James' teammate Matt Keegan piloted the #51 Team Panoz Panoz Avezzano for a team double-podium between the two classes that saw Keegan in first place in category and just outside contention for the overall podium. "It was very cool to win here," Keegan stated. "I have my friends and family here this weekend to support me, and it's my first race at this track so it's really exciting (to win.)"

Second step on the am podium went to Jarrett Andretti in the #18 Andretti Autosport McLaren 570S GT4. Andretti started 5th overall on the grid and managed to fight out of the starting traffic that found him as far back into the pack as tenth place, before finishing seventh overall and as the second highest ranking amateur.

Drew Staveley fought his way back from the last row on the grid due to a technical infraction and onto the amateur podium in the #12 Ian Lacy Racing Ford Mustang GT4, closing out the Long Beach podium.

CBS Sports Network will premiere the Pirelli GT4 America Streets of Long Beach Presented by AWS on April 21st at 7:00pm ET, with an encore presentation at midnight on April 22nd; check your local listings for channels and additional broadcasts. Pirelli GT4 America Sprint competitors next take to the track at VIRginia International Raceway on April 26th through 28th.