Hart transferred his driving duties to Travis in the mid-point of the race and McAleer, the early leader, turned his #29 Raphael & Associates/Classic BMW BMW M4 GT4 machine to Justin Raphael at lap 17. Raphael left the pit area in the overall lead, but a miscalculation had the BMW driver leaving the pits just three-tenths of a second to quickly from the mandatory pit time. At the conclusion of the race, the McAleer/Raphael duo was penalized 30 seconds due to the rules infraction and finished 11th overall. 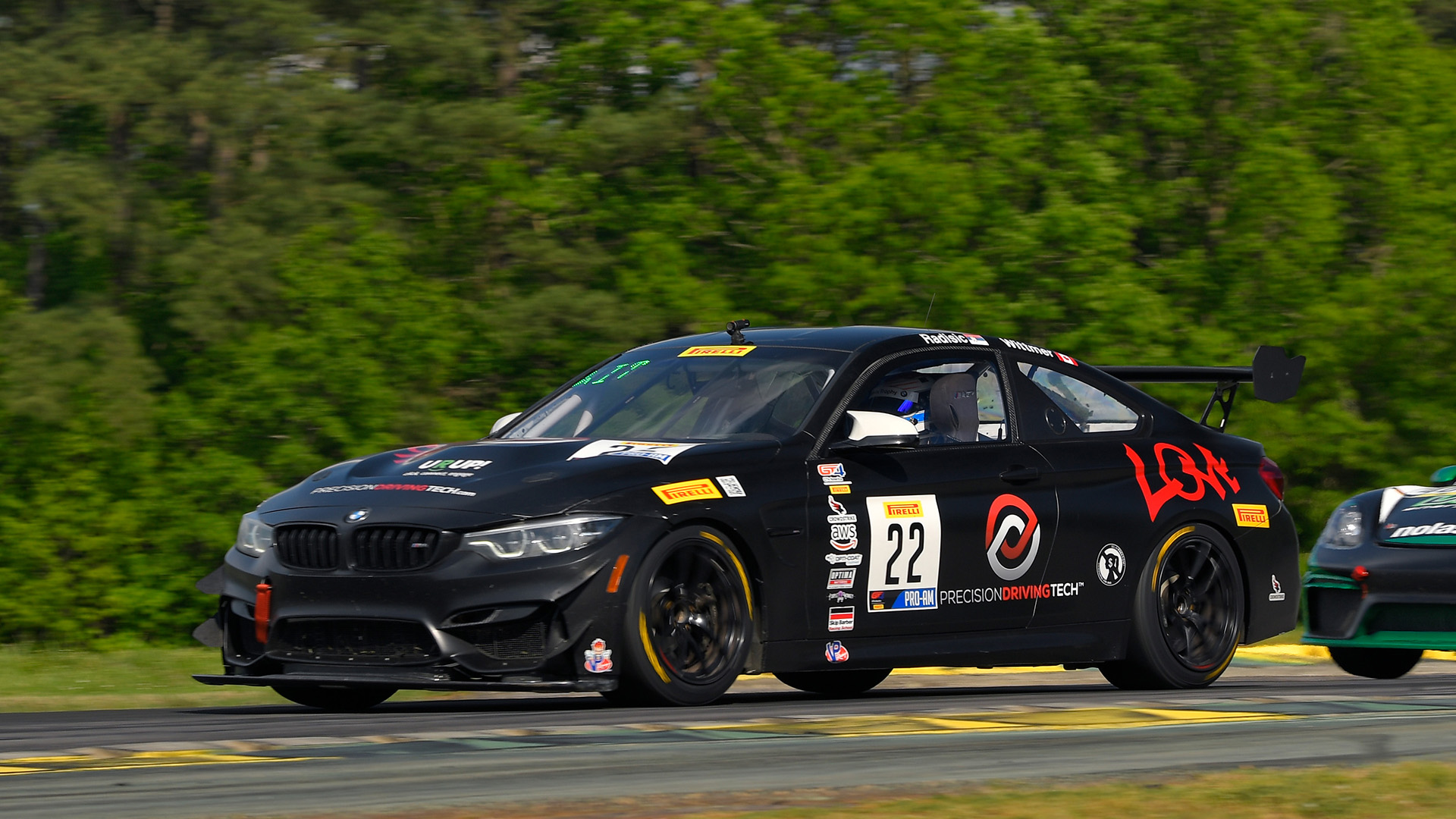 A late-race yellow flag period caused the race to finish behind the safety car and Travis pulled his Porsche into victory lane for the GT4 SprintX overall win as well as the SprintX Pro-Am honors.

Finishing second overall and capturing the GT4 SprintX East Pro-Am class was the #22 Precision Racing Tech BMW M4 GT4 with Marko Radisic and Karl Wittmer at the wheel in the two-driver, one-hour contest. 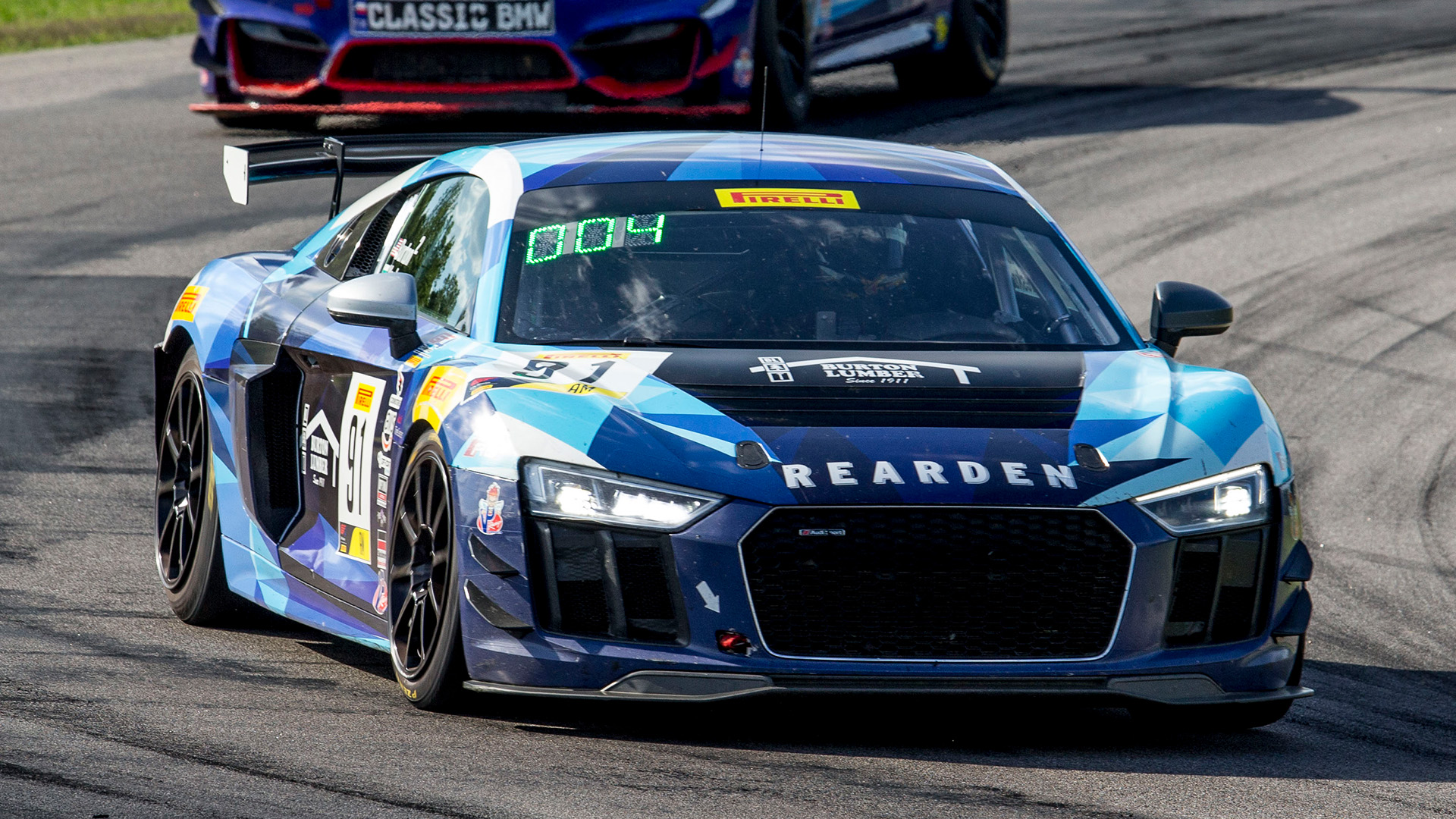 Winning the GT4 SprintX Am division and placing third overall was the combination of Jeff Burton and Vesko Kozarov in the #91 Burton Lumber/Rearden Racing Audi R8 LMS car, giving the Utah-based team double class victories this weekend at VIR.

Rounding out the top-ten overall in fourth event of the GT4 SprintX campaign were the driving combos of Kris Wilson and John Allen in the #16 Auto Technic Racing BMW M4 GT4 (second in the Am division), Mike Vess and John Capestro-Dubets in the #46 NOLASPORT Porsche 718 Cayman Clubsport MR (third in the Am class), Andy Pilgrim and Adam Poland in the #33 Doghouse Performance Audi R8 LMS (second in SprintX East Pro-Am), Preston Calvert and Matt Keegan in the #51 Team Panoz Racing Panoz Avezzano GT (fourth in SprintX Am) and CJ Moses/James Sofronas in the GMG Racing Audi R8 LMS (fifth in SprintX Am).

Despite the pit stop penalty, the Raphael/McAleer team were able to take home the third-place trophies in the GT4 SprintX East Pro-Am class in addition to its Saturday overall win.

JASON HART (#47 NOLASPORT Porsche 718 Cayman Clubsport MR GT4):
“It’s a fantastic way to start the season for our NOLASPORT team with four wins in four races. We’ll see if we can carry it now. We understand that there is some luck involved in that type of streak. And there is a lot of hard work too. We a re just going to keep our head down and go through the data, go through the video and keep working on our setups. Our engineers are doing a great job with strategy in the races. We keep going through our playbook and keep hitting are marks each race. Hopefully we can come out at the end on top.”

MATT TRAVIS (#47 NOLASPORT Porsche 718 Cayman Clubsport MR GT4):
“It was an unusual situation with the penalty, but thankful for the result today. Jason drove a great first stint and I went out and did my best in between the caution periods. We are thrilled to bringing home an overall win for NOLASPORT today.”

MARKO RADISIC (#22 Precision Racing Tech BMW M4 GT4):
“The week here has been amazing for us. In today’s race, we hoped to maximize the points and winning our class is great. I was a little sad that the last caution flag came out as I thought I might have a chance to go for the overall win. What a great weekend for us and it was tremendous to driving with Karl in the BMW. Karl drove a great first stint today. Now, we hope to continue with a strong season and keep racking up points.”

KARL WITTMER (#22 Precision Racing Tech BMW M4 GT4):
“Our team has really progressed well since the start of the season. The Precision Racing Tech team is small but very well-run and professional. They execute every plan that we had in place and great job today by the team. Great job by BMW Motorsport and Marko did one of heck of job out there.