Elkhart Lake, WI - Spencer Pumpelly and the #66 TRG LaSalle Solutions Porsche 718 Cayman GT4 brought the field to the green flag under sunny skies with cool temperatures for Pirelli GT4 America Sprint Race 2 at Road America. Michael Cooper and the #10 Blackdog Speedshop McLaren 570S GT4 wasted no time and won the drag race on the run to turn 1 to take over the lead with a frustrated Pumpelly just behind.

Michael Dinan and the #210 Flying Lizard Motorsports Aston Martin Vantage GT4 settled into third overall, first in the Am category with Drew Staveley and the #12 Ian Lacy Racing Ford Mustang GT4 fourth overall, third in the Pro category.  Paul Terry and the #59 Rearden Racing Aston Martin Vantage GT4 sat fifth overall, second in Am, with Tony Gaples, in his return to the series, getting the #11 Blackdog Speedshop McLaren 570S GT4 to third in class, sixth overall.

For the first 17 minutes of the race, Pumpelly was able to stay within a half second of Cooper as the two played a game of cat vs mouse. Dinan pulled away from his rivals in the Am division and started to inch closer to the two overall leaders.

With 31 minutes remaining, Am driver Terry was able to get by Pro competitor Staveley for fourth overall and begin to hunt down Dinan for the class lead, who sat just behind Cooper and Pumpelly.

At the same time Milwaukee’s Jeff Courtney and the #99 RecStuff Racing Mercedes AMG GT4 would get past Sean Quinlan’s #119 Stephen Cameron Racing BMW M4 GT4 for fourth position in the Am class, seventh overall.

With 26 minutes left on the clock, as Staveley stalked the Aston Martin of Terry, Terry would succomb to the pressure and spin going into turn 14, allowing Staveley to regain the fourth overall position, also giving Tony Gaples second in Am. 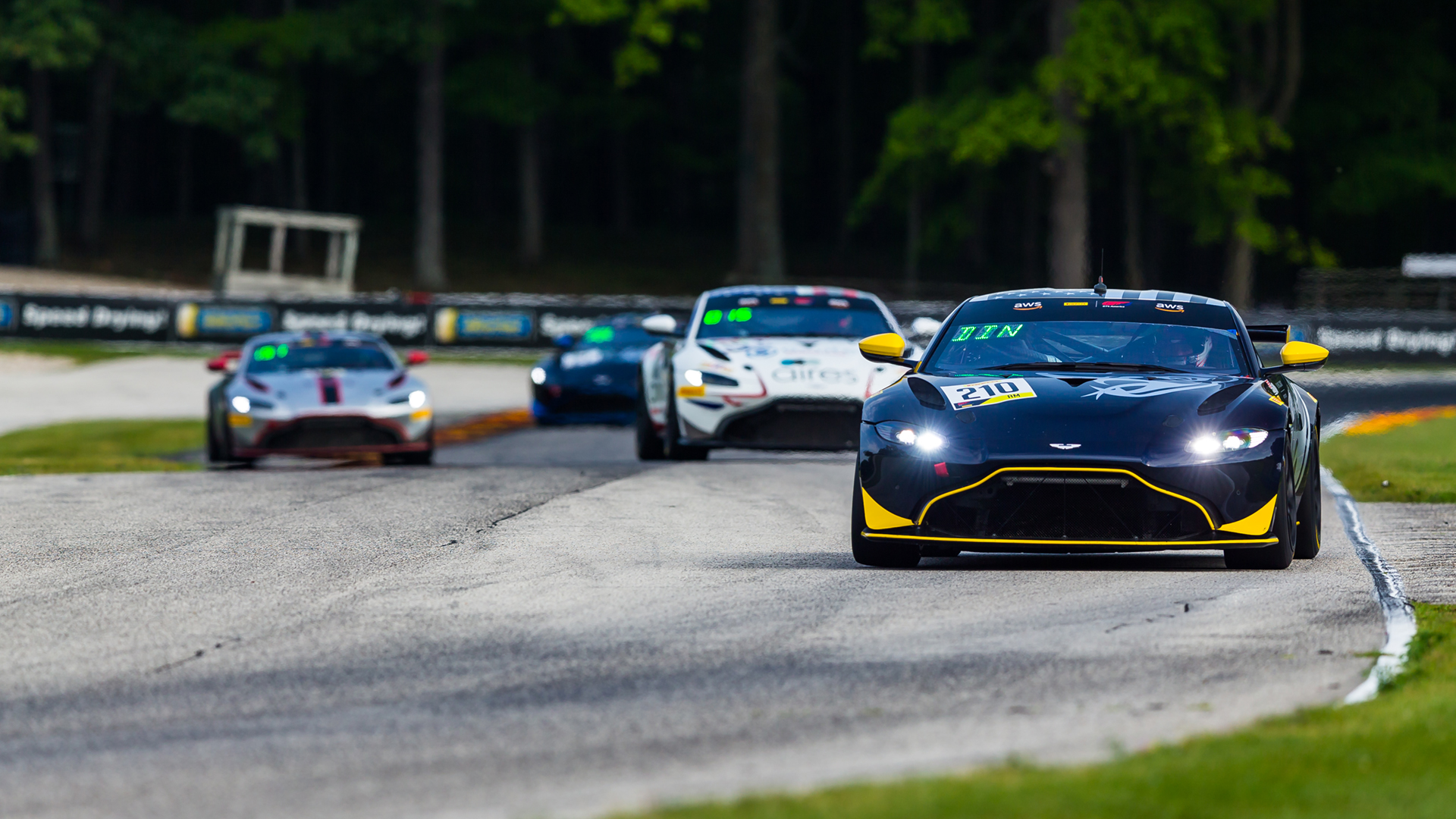 As the clock ticked below the 20 minute mark, Pumpelly would remain in Cooper’s shadow as the two battled for the Pro and overall lead. Dinan would drop off the leader’s pace slightly, but maintain a comfortable lead in Am over Gaples.

With 14 minutes remaining, Pumpelly got into the slipstream of Cooper going into turn 5, and snuck by on the inside of the corner with an out-braking maneuver to grab the overall lead.

On the final lap Cooper would pull up on the outside of Pumpelly going into turn 5 and try to use an outside-in move going up to turn 6. The two would go side-by-side and trade paint through 6, but Pumpelly would remain on the inside for turn 7 and keep the lead. Cooper would stay on the back of Pumpelly’s bumper until turn 14, when Cooper would get another run on the Porsche. Pumpelly would hold his car to the inside wall and win the drag race to the checkered flag by just .204 seconds.  Pumpelly, celebrating the victory with donuts at turn 5, would also run the fastest race lap of 2:19.114 to grab pole for Sunday’s Race 3.

“We had a great race. It took a lot to get by Michael and he gave me plenty of room, but we fought all the way. It was good, fair racing and I was able to take it home. Big thanks to the TRG LaSalle Solutions guys for giving me a great car today. I’m really happy and happy to do it for everyone!” said Pumpelly on the win.

Behind the overall leaders Dinan would win Am, his seventh of the season, with Tony Gaples getting past Staveley for fourth overall, second in Am.  Staveley would finish fifth overall, third in Pro. Paul Terry would claim the final podium position in Am, sixth overall.

“My confidence is high after all the great results we’ve been able to produce this season. A huge thanks to Flying Lizard for giving me this car today and through the season!” said Dinan.