Elkhart Lake, Wis. – Flying Lizard celebrated another victorious weekend in the GT4 America series at Road America, clinching five more wins to add to the team’s celebrated record. The Wisconsin road course mostly treated the team well, in another triple header event with the No. 21 and No. 210 Aston Martin Vantage GT4s of Michael Dinan and Robby Foley, and the No. 30 McLaren 570S GT3 of Erin Vogel and Michael Cooper.

“This weekend was another great performance from the team and the drivers,” said Program Manager Darren Law. “We had changing weather conditions every day from rain to dry, to hot and cool weather. They all adjusted to the conditions and managed the cars well. Our program has really hit its stride this season, we are in the fight for the championship and we are looking forward to a strong finish over the two remaining weekends.”

Sprint Race One
Friday afternoon’s race two started under wet conditions, with light rain coming down over the entire circuit. Dinan started from 12th overall, ninth in the Am class. Dinan showed incredible skill in the rain, gaining six positions in the opening laps, before a full course caution brought the field back together. With 30 minutes remaining, the field went back to green and Dinan climbed to fourth overall, and shortly after he took advantage of a spun Drew Stavely to take the win in class, and earning his first overall Sprint podium.

Sprint Race Two
Saturday morning brought the GT4 America field cooler temperatures and sunny skies as Michael Dinan took the green flag from fourth place overall. He slipped into third place behind Michael Cooper and Spencer Pumpelly heading into turn one. As the race continued, he stayed close to Pumpelly as he put heavy pressure on the race leader. The battle for the lead intensified as the front running pair pulled away. Dinan held his position, executing a flawless run in the No. 210 Aston Martin. He finished the 50-minute race in third overall and first in the Am class.

Sprint Race Three
Dinan took the final green flag of the Road America race weekend on Sunday afternoon from fourth position overall. As the field roared into turn one, Dinan went side by side with Michael Cooper, now in the Blackdog Speedshop McLaren, to fight for third. By turn three, Cooper kept the position, sandwiching Dinan between a pair of McLarens. As the race continued, the field spread out, allowing Dinan to keep the lead and create a comfortable gap over the next car in class, Paul Terry. He kept the position to the checker flag, again sweeping the Am wins of his Sprint weekend.

SprintX Race One
After narrowly missing the overall pole position for Friday afternoon’s SprintX race, the No. 21 of Michael Dinan and Robby Foley started from pole in the Pro/Am class, and second overall. Dinan’s first lap produced a battle for position, with him losing the spot in turn five, but quickly taking it back on the entry into turn six. Just five minutes later, a car ahead went off course, kicking up debris as it re-entered the racing line. The debris hit the Aston Martin’s fire bottle and kill switch, effectively paralyzing the car at the kink.
Erin Vogel’s first qualifying session netted the No. 30 McLaren 570S GT4 a ninth place starting position, 15th overall. The car had suffered damage in the second qualifying session earlier in the day, producing some electrical problems that affected the car’s competitiveness.

Despite the issues, Vogel was able to climb two spots before Dinan’s stalled car brought out the full course caution. The field pulled back together for the restart, putting Vogel in the position to make the pass for twelve on Sean Gibbons. She made her mandatory stop from twelfth with 30 minutes remaining, handing the car over to Michael Cooper for the remainder of the race. With 22 minutes left on the race clock, he claimed 11th, but slipped back to 12th by the checkered flag. Finishing fifth in the Pro/Am class, the result marked the pair’s second top-five finish in what has proven to be a season filled with attrition.

SprintX Race Two
The pair of Flying Lizard cars started one in front of the other, with Michael Cooper and the No. 30 McLaren in 12th, and the No. 21 of Robby Foley behind him in 14th. The field charged through the opening turns, all staying close, producing intense battles for position. At the end of the first lap, the pair crossed the start/finish line in 10th and 11th, with Jarrett Andretti squeezing in between the two in turn one. In a pack of about 20 cars, the field stayed tight, going side by side into every corner. The pair of Flying Lizard drivers battled with Jason Hart and Andretti in a four-way battle for tenth position, trading spots with each turn of the road course. Cooper swept by Samantha Tan in turn eight to climb up to ninth as Foley began to get heavy pressure from the pair of NOLASPORT Porsches as he also passed Tan to advance to 11th. The trio of Andretti, Cooper, and Foley finally managed to pull their battle away from the field, with Andretti leading their group. With 15 minutes of racing complete, Foley began pressuring the sister car of Cooper, making his pass on the inside of turn 14 to crack into the top 10. 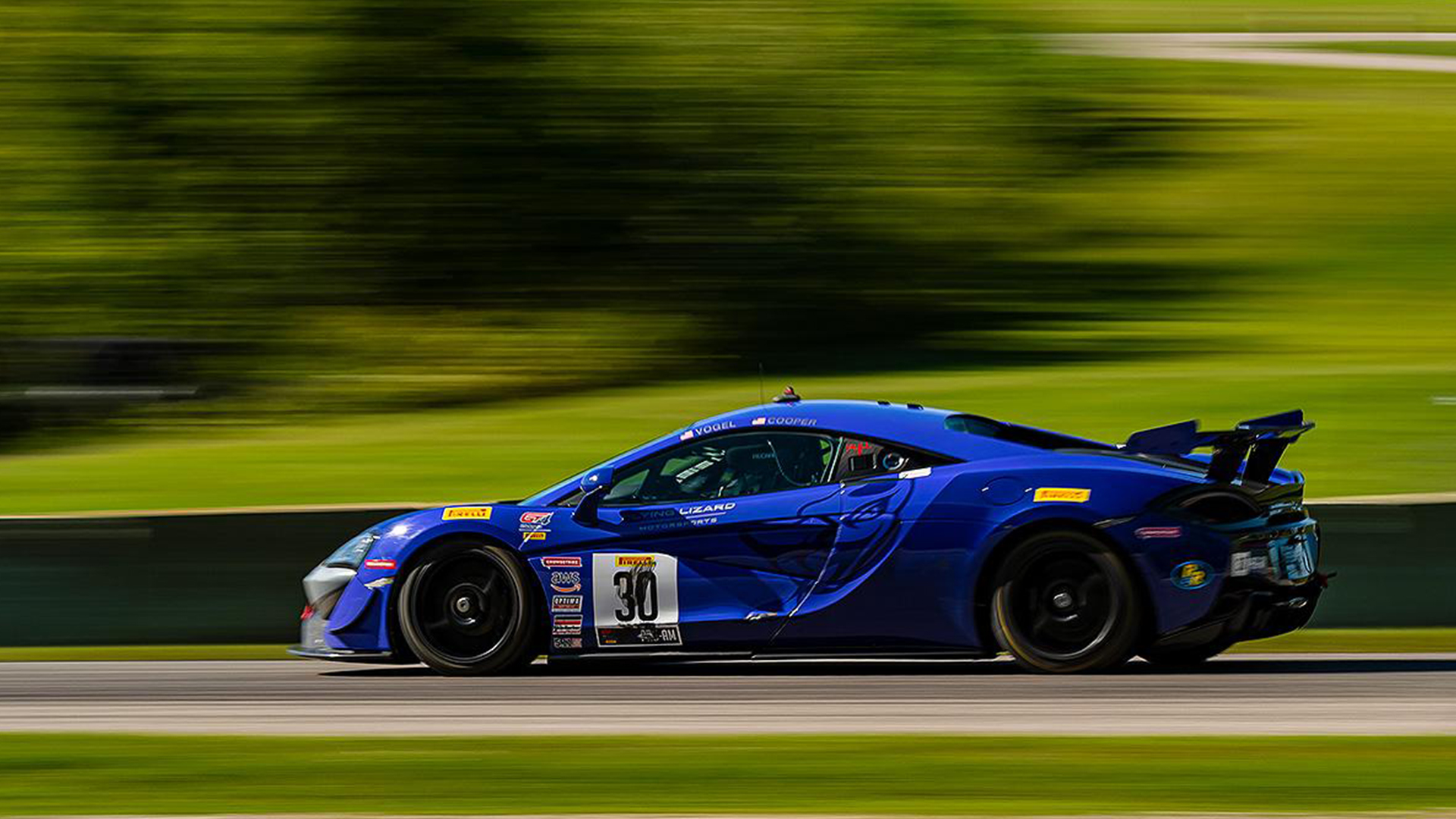 Foley made quick work of Andretti, making the pass in Canada Corner, to continue his climb and pull away from eighth. The pit window opened with 35 minutes remaining on the race clock, with Foley and Cooper running eighth and ninth. The pair stayed out, opting not to pit immediately, as Andretti’s McLaren and the KTM X-Bow were the first to pull in for their mandatory stops. The pair of Lizard entries came in during the final minutes of the pit window.

Impressive work by the Flying Lizard crew helped the No. 21 Aston Martin gain three spots, allowing Dinan to join the fight from fifth spot. Erin Vogel took over the No. 30 McLaren, running 11th as the pit stops cycled through. Dinan had a strong opening lap, passing both the Panoz and the GMG Porsche to take fourth overall with 20 minutes to go. At the 15 minute marker, he passed Charlie Belluardo on the inside of turn three in a sweeping move to land on the first step of the podium. A significant gap separated him from Bryan Putt, but Dinan closed it fairly quickly, making a strong move on the inside of the carousel to charge ahead to the race leader, James Walker Junior. Over four seconds separated Dinan from the leader, but his faster and more consistent lap times brought the No. 210 Aston Martin in the position to make the pass lead in the outside of turn one in the last lap, securing another SprintX victory. Vogel celebrated a strong finish, landing sixth in class, and a top-ten finish overall.

SprintX Race Three
Sunday’s SprintX race three was gifted with another sunny but chilly morning. Michael Dinan started the No. 21 Aston Martin from fourth place. Though he lost the position in the opening turn, he quickly gained the position back from Samantha Tan, then moved forward to overtake Matt Travis. An early full course caution bunched the field back together, allowing for a three way battle for second place between Andretti, Dinan, and Travis. The three put on an exciting show, each rotating through the lead position. Andretti got too comfortable with a curb, resulting in his car stopping on track, allowing for Travis and Dinan to continue the fight.
The mandatory pit window opened, and both cars pitted, with Jason Hart taking over the NOLASPORT Porsche for Travis, and Robby Foley in the Aston Martin for Dinan. Foley joined the race with a 1.3 second gap to the Porsche, but closed in with every lap. With ten minutes remaining on the race clock, he swept by the Porsche and pulled away, claiming first position in class and second overall. He held the position to the end, netting another win for Flying Lizard.

Erin Vogel started her final race of the weekend 12th but the restart from the early full course caution brought disaster for the No. 30 McLaren. As the field came to green, the cars ahead of Vogel immediately slowed, leaving her with nowhere to go. She hit the car in front of her, causing serious damage to the McLaren, resulting in an early retirement.

Only two races remain in the 2020 SRO GT4 America championship: Circuit of the Americas, September 17-20, and Indianapolis Motor Speedway, October 1-3. In preparation for the team’s first GT4 event at IMS, the Lizards will test at the iconic facility in mid-September with the No. 30 McLaren 570S GT4.

Michael Dinan
It was fantastic to get another win with Robby, and end the weekend with a solo win. We’ve had a fantastic season and it’s great to continue our roll here at Road America. Robby and the whole team did a fanatic job all weekend long, just as they have all season. It was a little more difficult to get the wins in SprintX this weekend. It was tight racing, but one of the more enjoyable races with all the close wheel to wheel action. Our competitors did a fantastic job. All around, I’m thrilled and pumped to keep going. I’m looking forward to Circuit of the Americas and Indianapolis, and these wins will keep us in the championship contention.

Robby Foley
Unfortunately we had the one DNF, for no fault of our own. It was just a freak thing. We came back strong. Yesterday we started off near the rear of the field. I tried to pick off as many people as I could, knowing Michael’s pace relative to the other Ams. He did a great job to seal the win. Today, when I was in second with Hart in front, and I wanted to close it out in the same way for him. It was tricky to get by the Porsche. I had to get close enough to force him to defend and take advantage of that. Great to get another two wins for the whole team, and hopefully we can take it on to the next one.

Erin Vogel
Racing is one of those sports where you can execute everything perfectly, and for reasons outside of your control, your chances at success are hampered. We’ve had a lot of bad luck this weekend, and I sincerely hope we’re getting it all out of the way so that we can end the season on a high note. We’re getting closer with each step, and everyone is working so hard to get us in the best position possible, every race. The support from the team and the fans has been so encouraging, and I hope we’re able to bring in some results worthy of some good celebrations soon.

Michael Cooper
Overall, there were definitely high points in the weekend. Sixth in class on Saturday was good, and Erin got some time in the car in wet conditions, which will pay dividends. We’re going to go test a little bit more before COTA, and hopefully we can show up there with a little more pace and give the front runners a harder time.