ALTON, Va. – The four Fast Track Racing/Classic BMW sports car drivers make the trek to one of their favorite racing venues this weekend (April 26-28) when they compete at VIRginia International Raceway in the annual Pirelli GT4 America and TC America competition at the high-speed 3.27-mile, 17-turn circuit in the pretty southern Virginia area.

Now, in 2019, the Fast Track Racing operation comes to VIR seeking more race victories after scoring the GT4 SprintX Am class win with drivers Toby Grahovec and Chris Ohmacht in the No. 92 EFI Global/Classic BMW BMW M4. Now, the same duo returns in the No. 92 VETS Indexes/Classic BMW BMW M4 GT4 sports car in the GT4 America Pro-Am division in the GT4 doubleheader set for Saturday and Sunday.

The Grahovec/Ohmacht combination also won at Utah in 2018 and placed third in the GT4 SprintX Am point standings.

Both Ohmacht and Grahovec will handle double duty this weekend at VIR with the Franklin, N.J., racer also competing the GT4 Sprint doubleheader races in the No. 92 BMW M4 GT4 machine, while the Celina, Tex., driver and former TC class champion returns to the TC America action at VIR with the potent No. 26 Fast Track Racing/Classic BMW BMW M240iR sports sedan. Grahovec is just four points out of the TC point lead after the season-opening weekend at Circuit of the Americas (COTA) last month. 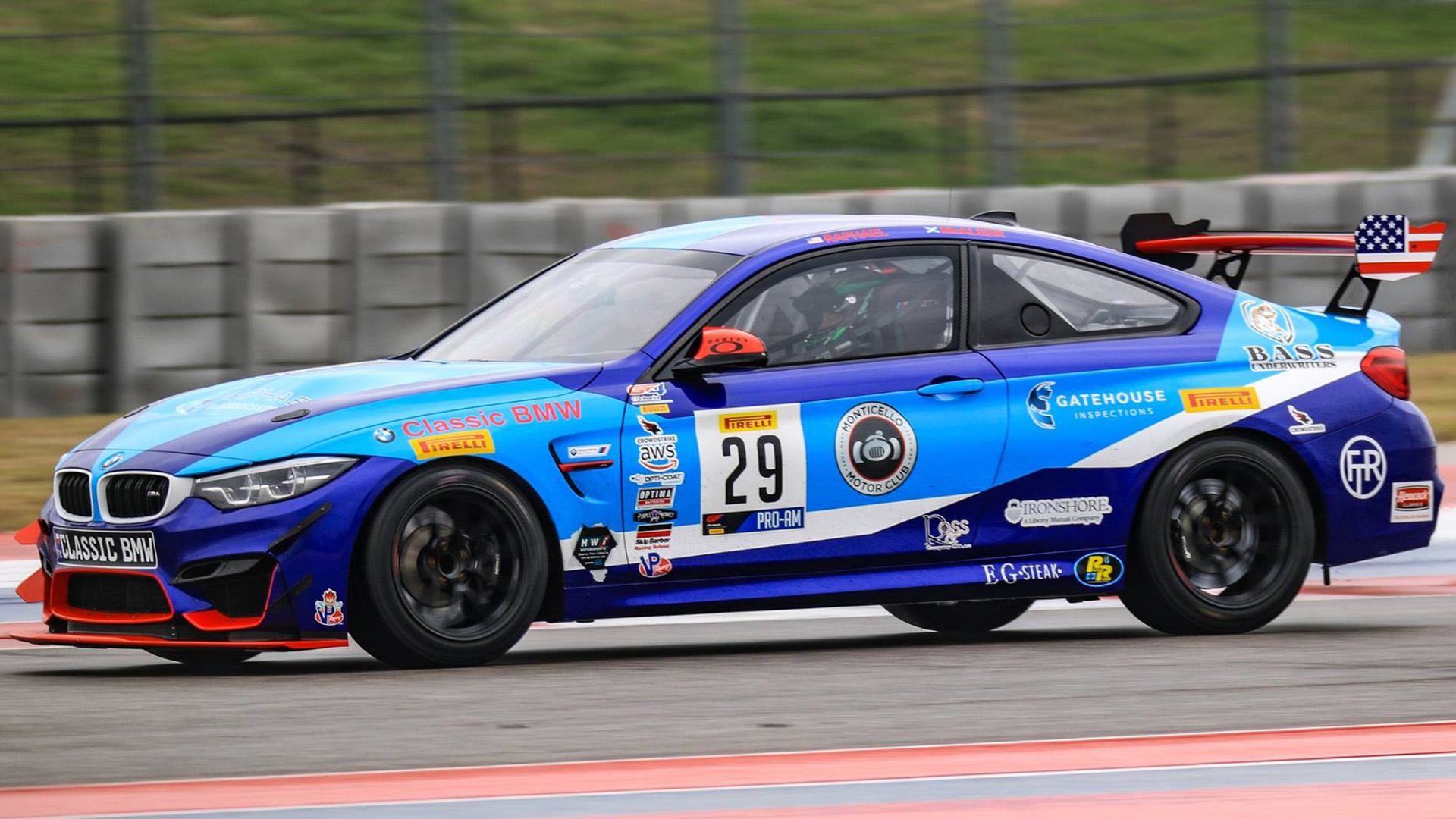 Joining Ohmacht and Grahovec in the Fast Track Racing lineup will be the pair of Justin Raphael of Franklin, N.J., and veteran pro racer Stevan McAleer of Cold Spring, N.Y., in the No. 29 Raphael & Associates/Classic BMW BMW M4 GT4 car competing the GT4 SprintX Pro-Am category at VIR. The Raphael/McAleer combo is no stranger to the GT4 America Pro-Am podium as well with a second-place finish last year at COTA.

“I think our Fast Track Racing team is prepared for a strong weekend at VIR,” said Grahovec, who also serves as team manager for the Classic BMW contingent. “VIR is one of my favorite North America tracks. It is so much fun to drive with high-speed corners and long straights. It’s an old fashioned race course and I know our drivers really look forward to competing at VIR. Last year, Chris and I were able to score a class win in the new BMW M4 and that was a thrill. Now, we are looking for more GT4 hardware and a trip to the winner’s circle again.”

Ohmacht showed consistent improvement in his rookie season in the GT4 division last year. Now, the New Jersey driver looks for another strong performance in both the GT4 SprintX and Sprint races.

“I am looking forward to an exciting weekend at VIR,” said Ohmacht. “This is arguably my personal favorite track and we have been successful there before. It is certainly a full and very competitive field for this event. I know I will be very busy with competition in both Sprint and SprintX divisions. And I always look forward to teaming up with Toby again. We won last year together at VIR.”

Raphael and McAleer have proven to be a competitive duo at COTA and they currently rank fourth in the GT4 America SprintX East point standings entering the VIR weekend action.

“VIR is a phenomenal track and facility and I’m anxious to get back there,” said Raphael. “The GT4 competition is stellar and I expect another wild weekend on the track in the two GT4 SprintX races on Saturday and Sunday. I know that Stevan and I believe the No. 17 BMW M4 can be right in the mix at a track like VIR. The BMW M4 seems to fit the VIR circuit very well.”

McAleer, the veteran driver who is originally from Glasgow, Scotland, has been a regular competitor at VIR over the years and knows the tricky 17-corner layout very well. He expects a strong run for he and Raphael this weekend.

"It feels like we have been out of the seat for ages, so I’m excited to get back in the car at a fantastic race track on the GT4 America schedule,” said McAleer. “Justin and I currently sit fourth in the East Sprint X Championship standings and we look to fight for podiums both races this weekend. We will be trying hard to climb the points order. I also think our car should be more competitive than it was at COTA, as the BMW M4 has be strong at VIR in the past."

All Pirelli GT4 America and TC America races at VIR will be live streamed on www.world-challenge.com and will be televised on CBS Sports Network at a future date.